Tom Clancy’s novels often include the Gulfstream G550. Which is a good example that Gulfstream has become a pop culture symbol that transcends the business aviation industry and has become a cultural phenomenon. Gulfstream is the first business jet manufacturer to have been the subject of a pop song, and the G550 had a major part in this. On June 30, 2021, this business jet’s final delivery took place, notwithstanding its popularity. Worldwide, more than 600 airplanes have been delivered since before the last delivery.

When it was debuted in 2003, it was the most capable airplane Gulfstream had ever produced. Gulfstream now sells more modern versions, but the G550, with its numerous variants, retains its appeal among clients from the corporate sector, governments, and even militaries.

The renowned Robert J. Collier Trophy was given to G550 in 2003 for excellence in designing, developing, and constructing an innovative aircraft while incorporating quantifiable safety benefits and far-reaching breakthroughs in aeronautical technology. It also received a dispatch reliability rating of 99.9 percent from the National Business Aviation Association, which is an outstanding achievement. The Gulfstream G550 transformed the pilot experience in business aviation.

The new Gulfstream PlaneView flying deck was installed on the plane. That technology is still being utilized today with updates on the latest Gulfstream aircraft types.

In addition to the Primus Epic Gulfstream PlaneView cockpit system, each G550 is equipped with Honeywell Primus 440/660/880 series radars. It also included an infrared camera called an Enhanced Vision System, which could detect terrain and runway lights in low-light circumstances.

With the favorable flight circumstances, the G550 set an old record for a business jet flying 7,301 miles from Seoul, South Korea to Orlando. However, new flagships of businesses can now fly considerably greater distances; for example, the G700 has a range of 7500 nm.

A pair of Rolls-Royce BR710 engines power the Gulfstream G550, which has a range of more than 5,000 nautical miles. The BR710’s modern technology has a track record of success. Bombardier’s Global 5000 and 6000 aircraft also choose the same engine configuration and about 3,500 engines are now in use.

Over the years, the G550 has become a legend with its many modifications. Also used for government VIP trips, as a medical ambulance, and in a variety of military applications including surveillance and electronic warfare aircraft.

Gulfstream has also been doing trials with the G550 in order to continue its creative philosophy. Using sustainable jet fuel, G550 flew 3,951 nautical miles (6,651 kilometers) from Charleston to Farnborough, England in 7 hours and 13 minutes, an average speed of Mach 0.85. Gulfstream said it will continue to promote SAJF and its advantages in the coming years to contribute to a sustainable future.

2019 saw Shanghai and Seattle linked in 10 hours and 29 minutes, bringing the total number of records the G550 has achieved up to 55. G550 medevac aircraft were given to the Beijing Red Cross in 2018 and are set to transform the field of flight medical treatment proving the broad usage of the airplane. Today, business owners, governments, military, and medical teams rely on these aircraft, and the G550 has shown itself for a long time. 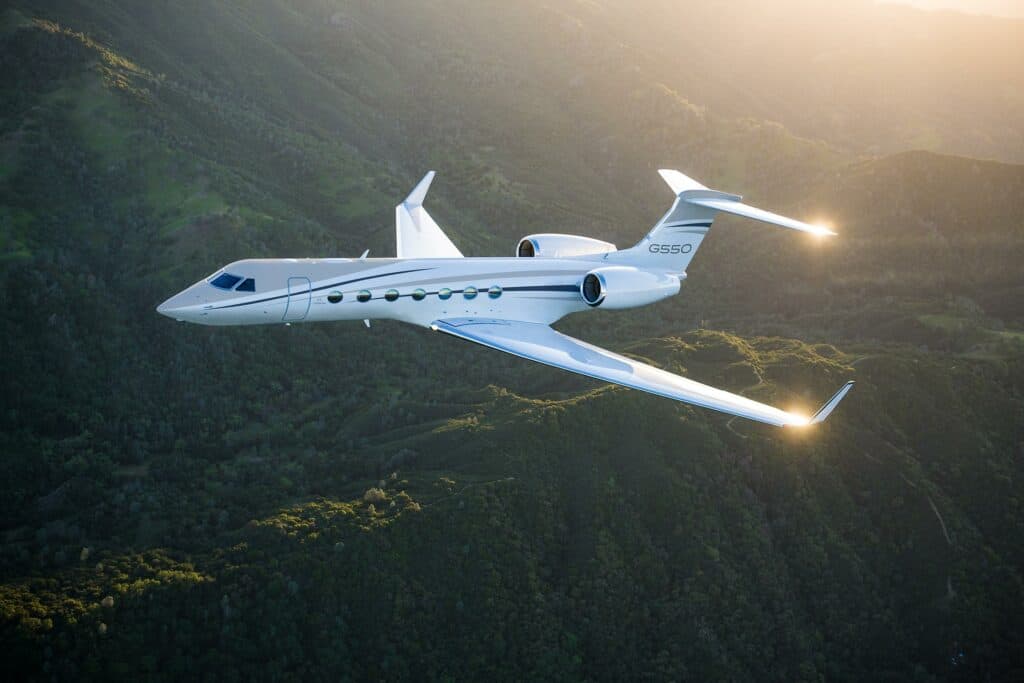 Outstanding performance and tactical adaptability combine to make the G550 an excellent pick. Large cabin and award-winning technologies make the Gulfstream G550 an ideal companion for any type of demanding assignment.

Because of its high thrust Rolls-Royce engines, it is able to fly quickly and far, while also emitting little noise and pollution, allowing it to land at any airport in the world.

PlaneView, which was first introduced on the G550, enhances the aircraft’s capabilities and comfort for both pilots and passengers alike. Due to its enhanced flight vision system, G550 allows pilots to safely land in any weather situation. A nose-mounted infrared camera and artificial cooling system are used in Gulfstream’s EFVS to identify the most minute features in the infrared image ahead.

Gulfstream’s G550 cabin may accommodate up to eight passengers to sleep or up to 19 people, depending on the configuration chosen. It has a calm, light, and fresh-air environment that is conducive to comfort and efficiency. Low cabin altitude even at higher flying altitudes is achieved by the G550 and Gulfstream using Gulfstream Signature Oval Windows increases the quality of the cabin. Assuring optimum performance and passenger comfort, the aircraft’s wings are designed to minimize turbulence. 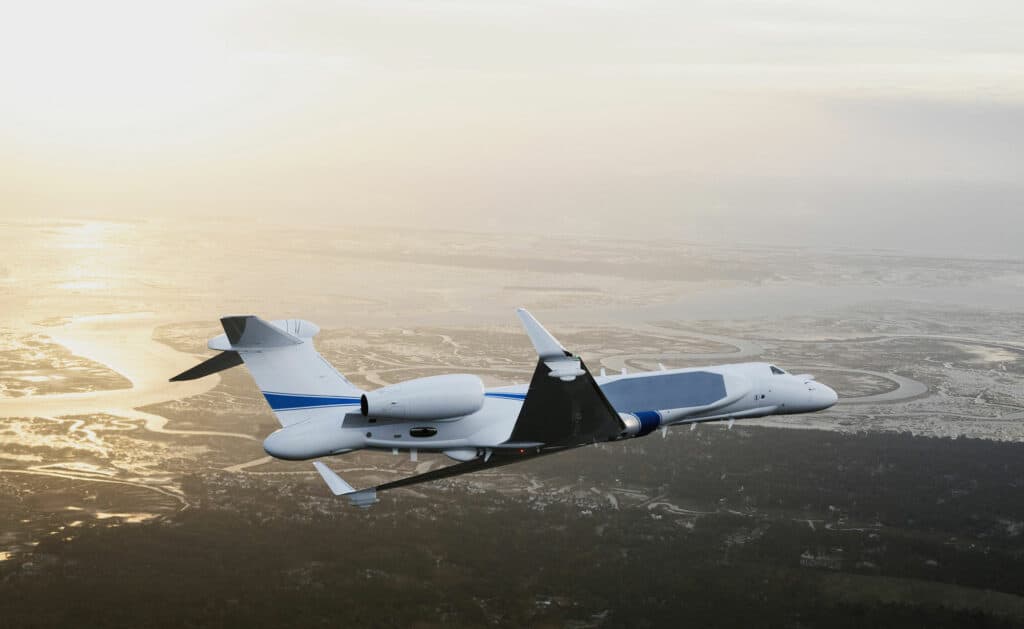 Disaster relief and air rescue services are provided by the G550 medevac version. With more than 50 years of experience in providing special missions aircraft across the world, Gulfstream’s G550 exhibits a high degree of technical innovation. G550’s medical bay, which is equipped with contemporary equipment, can sustain and stabilize patients in critical condition.

Among the features of the G550 Medevac are a powered gurney loading system on aircraft stairs, a fold-out nurses’ seat for individual patient care, and a bed designed to accommodate an infant incubator as well as advanced life-support capabilities (extracorporeal membrane oxygenation) and X-ray viewing equipment 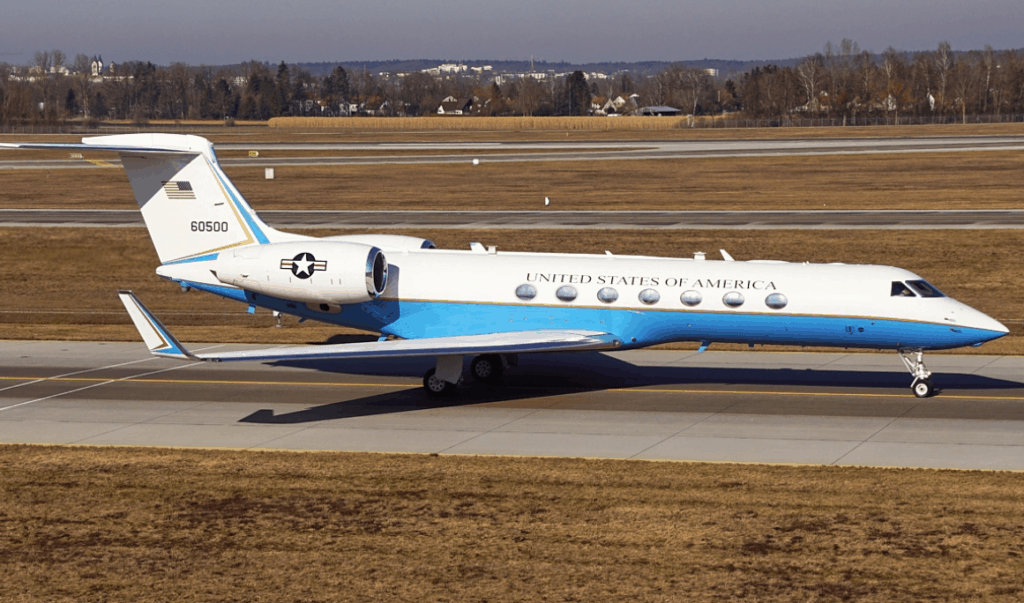 The C-37B is a twin-engine turbofan aircraft that was purchased to transport senior government and Department of Defense officials across the world. The Gulfstream V (G550) is equipped with a modern flight management system that includes a satellite-based GPS.

The aircraft is also equipped with military communications equipment for voice and data communications. The C-37B Gulfstream executive transport aircraft, which replaced the obsolete C-20A/D to provide high-speed, long-range transportation with secure communication capabilities to senior Navy Department workers, is one example. In the past, the G550 was also present for testing as a next-generation JSTARS aircraft. 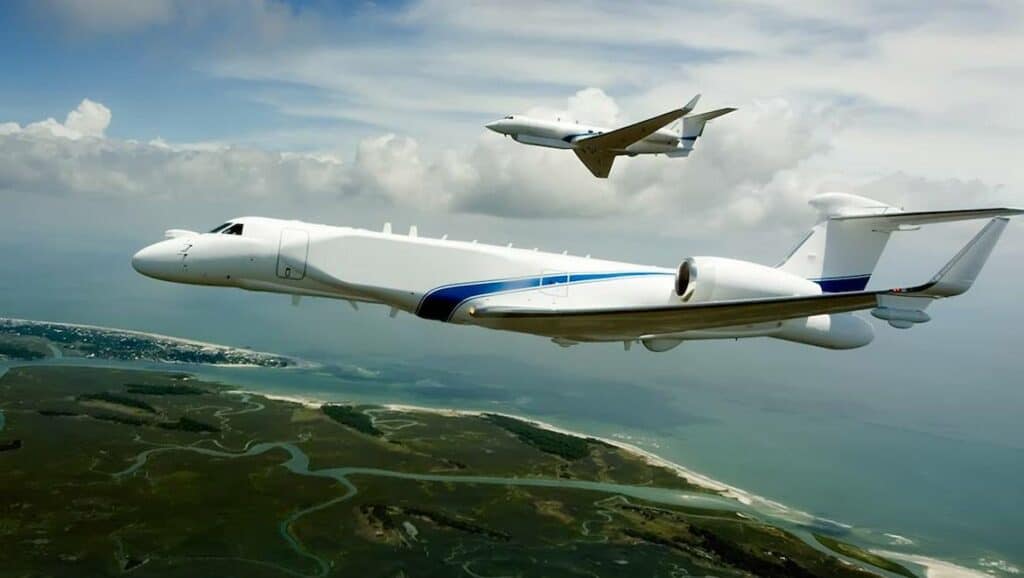 It’s the G550 version designed for intelligence operations by the Royal Australian Force. According to the Australian government’s Force Structure Plan, MC-55A will be used to guarantee that Australia has effective air intelligence, surveillance, and reconnaissance, as well as electronic warfare capabilities. They want to acquire a new MC-55A between the years 2020 and 2030. 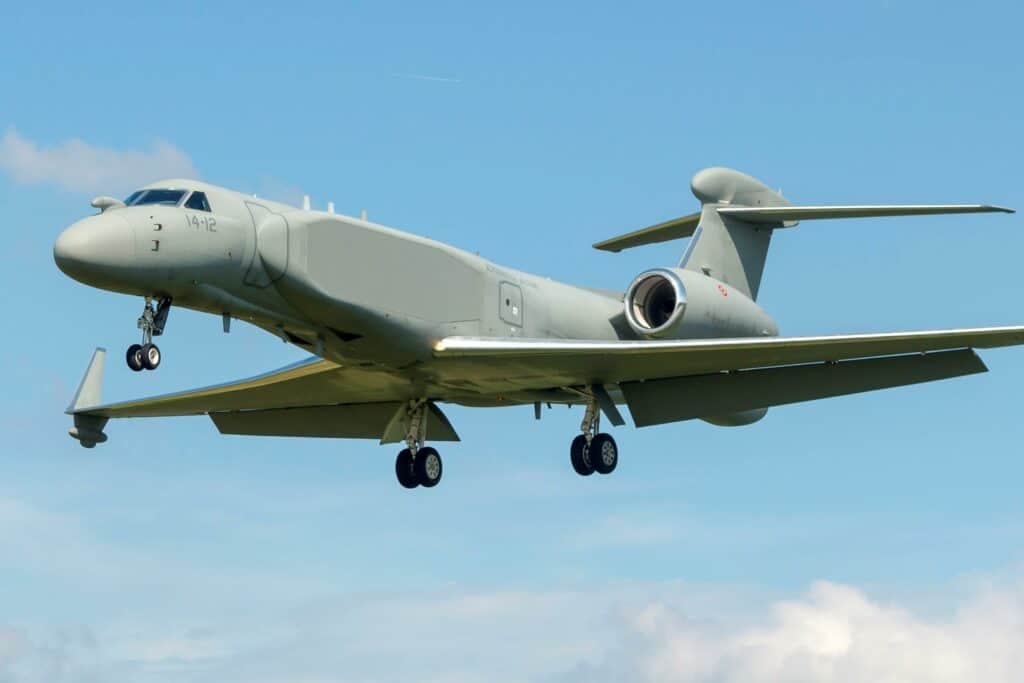 Despite being outclassed by current flagships, the Gulfstream G550 has a respectable high-speed cruise speed of Mach 0.85.

With its agile handling and sophisticated avionics, as well as the thoughtful design, particularly on the wings, the G550 combines great performance and comfort. It is simple for pilots to operate in any weather conditions, it is quick, and it has a spacious cabin. Even though the company began to offer models such as the G650 and G700 following the G550, it is still very competitive in the market due to its excellent performance.

Owners of business aircraft can also take advantage of a variety of cabin improvements offered by various firms. 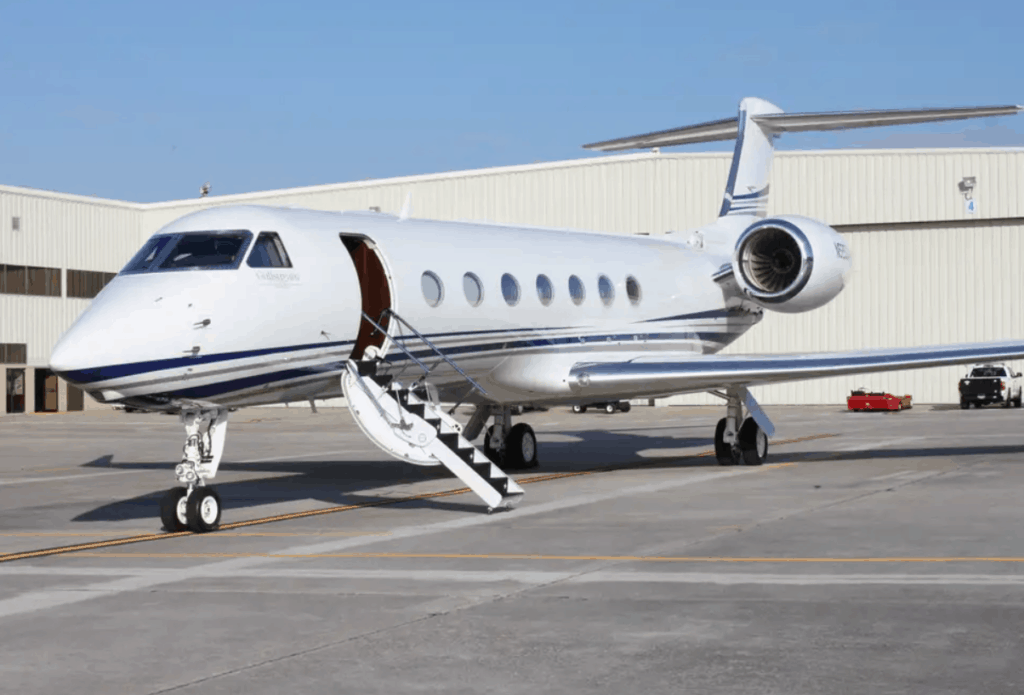 It is currently feasible to purchase a brand new Gulfstream G550, although pre-owned aircraft are also available. Depending on the aircraft’s design, service hours, etc., the price of a pre-owned aircraft can vary widely. G550’s current pricing ranges from $15,000,000 to $40,000,000.

The following link contains an example inspection prediction for a G550 as well as additional information regarding business jet maintenance.

Gulfstream components that need to be changed can be ordered from Gulfstream, the G550’s original equipment manufacturer, and installed by approved repair facilities. Apart from that, owners may come across a number of firms that may help them upgrade the inside of their plane.

While the Gulfstream G550 has shown its excellent quality and served as the company’s flagship for a long time, it is no longer the most up-to-date model and lacks some of the benefits of more recent versions. Given its high price tag and the impending end of manufacturing, other planes may be more cost-effective at this price range.

The G550, like other business aircraft, has two insurance options: liability insurance and hull insurance. Aside from this, there are additional specialized insurances. The kind of plane, its value, the pilot’s experience, and the aircraft’s safety record all influence the cost of insurance.

Earlier production versions from the years 2005-2006 are currently selling for $15,000,000 to $25,000,000. This pricing varies depending on total flying hours, configuration, upgrades, and other aircraft circumstances.

With its performance, comfort, award-winning design, and track record, the G550 is a very popular business jet. It is highly smooth throughout the flight, according to the owners and pilots, giving a comfortable, rapid flight with a long range. It is, however, not the most recent version of the firm. 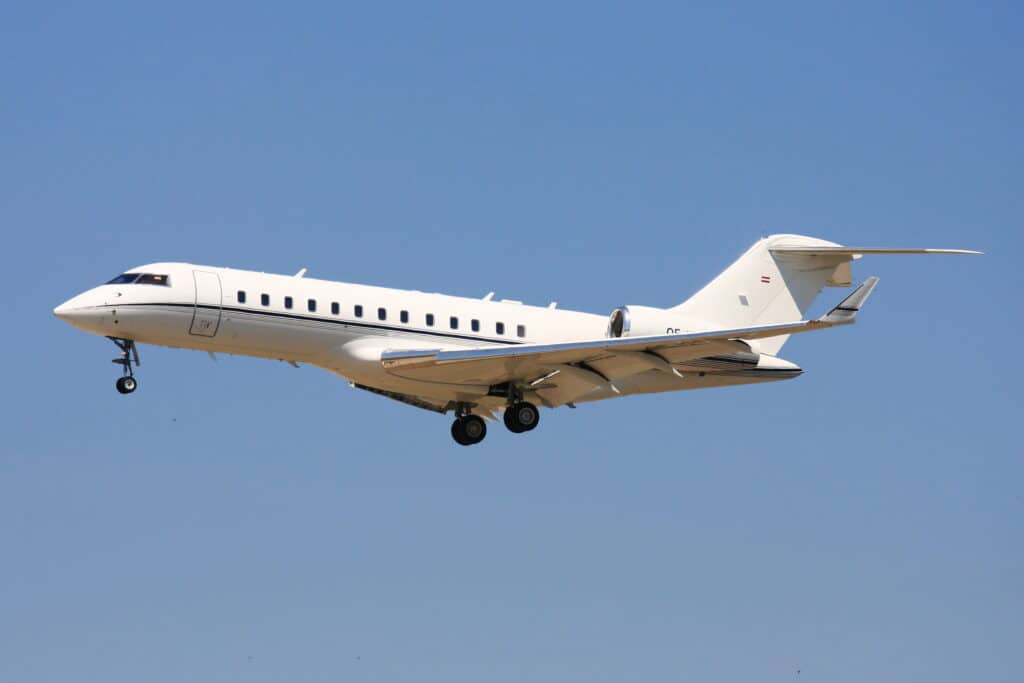 The Gulfstream G550 can be compared to the Bombardier Global 6000 and the Dassault Falcon 8X. A variant called G500 is also available from the company, which is quite similar to the G550 but has a lesser range.

Gulfstream G550 Clubs You Can Join

Gulfstream offers a number of Customer Service groups that you may find on their website and use through their “MyGulfstream” system.

Owners can also join the NBAA (National Business Aviation Association), which was formed in 1947 to promote a business aviation environment in the United States and across the world. It offers a welcoming and inclusive culture that fosters people’s ability to connect, communicate, and collaborate effectively.

Question: How many Gulfstream G550 was made?

Answer: Over 600 G550s were produced over the course of roughly two decades. After the delivery of the final plane in 2021, Gulfstream ceased manufacture.

Question: How much does a Gulfstream G550 cost per hour?

Question: How far can a Gulfstream G550 fly?

Answer: The Gulfstream G550 is a high-end business aircraft.

Question: What is the role and mission of the Gulfstream G550?

Answer: Although the Gulfstream G550 is a corporate jet, it has medevac, intelligence, and electronic warfare variants that go by other designations. Governments, military, and corporations all across the world utilize it.