The Gulfstream G600 was unveiled on the 14th of October, 2014. It was introduced as the successor to the G550, which had a production run of 600 units, making it the top-selling inter-continental business jet globally. A feat that the company expects the G600 to match. To set it up for success, Gulfstream has given the G600 a larger footprint, more powerful engines, and an extended range in addition to better features and amenities.

The testing of the G600 began in 2016, and by the end of June 2019, the Federal Aviation Administration (FAA) certified the airplane. Gulfstream finished production and delivery of the first G600 in August of the same year. A year later, the first G600 was approved by the European Union Aviation Safety Agency (EASA), and deliveries in Europe began to occur.

It holds over multiple world speed records for an aircraft in its weight class. On the 20th of April, 2018, the G600 flew across the Pacific ocean, starting in Shanghai with Honolulu as its destination. It completed the journey in 8 hours and 35 minutes, averaging Mach 0.90 during the run. The next day, the G600 flew across the Atlantic ocean, from Honolulu to Savannah in a record 7 hours and 49 minutes, once again averaging Mach 0.9. 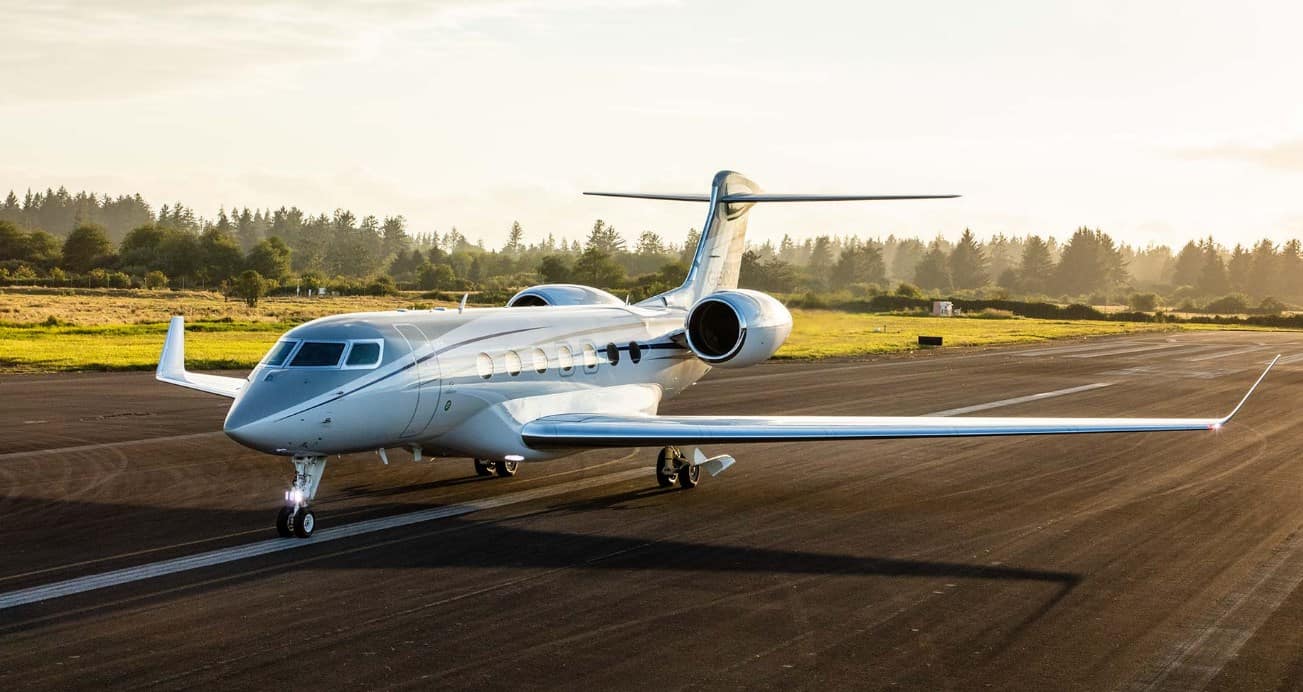 This aircraft has big shoes to fill. After all, its predecessor was the best-selling business jet of all time. But its record-breaking performance appears to be helping it get on its way. As of May 2021, 42 G600s are in operation.

The G600 has a rear-engine mounted, t-tail platform. The airframe is composed of aluminum, duralumin, titanium, and small amounts of steel. It has been designed to be larger than its predecessor (the G550) to provide more cabin space and larger fuel tanks. These fuel tanks are inside the supercritical swept-wings, which Gulfstream boasts are the most advanced in the industry. In addition, the G600 features multiple composite parts on the fuselage, such as the wing-to-body fairing, winglets, main landing gear doors, and elevator, produced by the aerospace manufacturer Daher.

The G600 is powered by two Pratt & Whitney Canada PW815GA engines and has a Honeywell HTG400G auxiliary power unit. Most of the other components, such as the hydraulics and electrical systems, including the digital fly-by-wire system, are taken from the G650.

Another Honeywell supplied system is the avionics system, which is the Symmetry Flight Deck. This avionics suite is one of the most advanced in the industry. It contains ten touchscreens that provide information on air traffic control (ATC), weather radar, and aircraft systems. In addition, the G600 is also equipped with an Enhanced Flight Vision System (EFVS) connected via a heads-up display (HUD) that provides a better field of view for the pilots. Honeywell also provides the G600 with environmental and life support systems.

The table below is a comprehensive list of all the specifications of the Gulfstream G600: 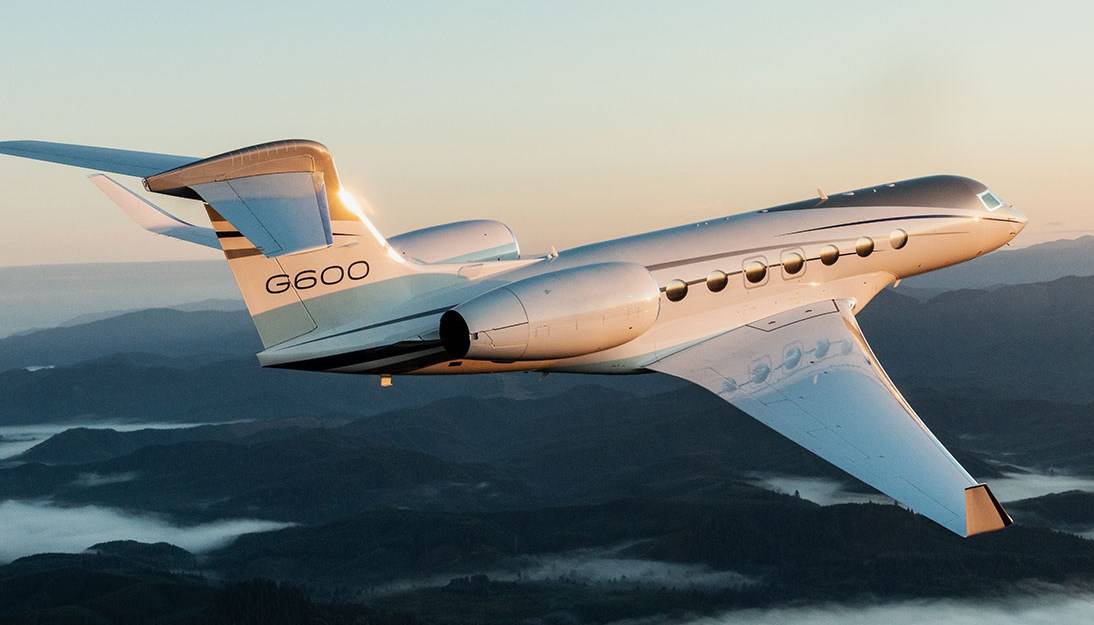 The base G600 comes in 3 configurations, but the customer can design the interior however they see fit. The only limitations are the cabin space and cost. As for equipment upgrades, the standard Gulfstream comes well equipped, and the only significant modifications that can be made are for connectivity. Again, Honeywell produces the connectivity equipment, the main options being the JetWave and Forge. 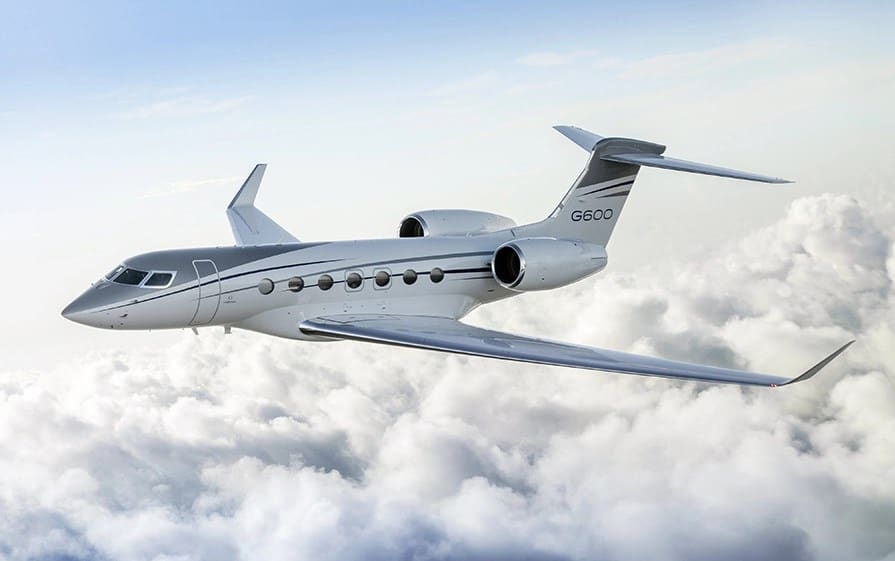 Fixed costs are precisely that. Whether you operate the aircraft for hundreds of hours or none, the amount you have to pay will stay constant. According to compareprivateplanes.com, the estimated cost per annum for a G600 is $750,333.

An aircraft like the G600 requires the bare minimum of two crew members – the pilots. However, most likely, the number will be four being the average. A skilled crew is needed to operate the aircraft safely and allow the users to have the best experience. However, experienced pilots and flight attendants don’t come cheap, and the higher the level of expertise, the more compensation they will require.

Once a crew is hired, they will require training, as many ratings and licenses expire after a specific period. In addition, the employer usually pays for pilots to complete their yearly Pilot Proficiency Check (PPC), Instrument Proficiency Check (IPC), and other more infrequent examinations such as medicals will have to be done even if the airplane isn’t being used.

There are two methods of storing aircraft: tie-down storage or hangar storage.

Tie-down storage is just renting some ramp space to park the aircraft on. There is no protection from the wind, rain, and other elements. This method is relatively inexpensive, and if the aircraft is used frequently, it might suffice, but most owners will want to place their multi-million dollar aircraft in a hangar.

Hangars keep the aircraft safe and out of reach from the elements. Renting them is expensive, and it can become a significant part of the annual cost. The average price of a hangar per annum can be vary depending on the airport. For example, in a state like Arizona, a hangar could set you back $81,000. But at a larger and busier airport like Los Angeles International Airport (LAX), hangars can easily cost around $120,000. Compareprivateplanes.com estimates the average cost of a hangar to be $102,000.
Insurance
There are different types of insurance, but the two required ones are liability and hull insurance.

Liability insurance protects against damages such as injury or death to third parties. The term third party encompasses passengers and cargo, baggage included. For the most part, liability insurance doesn’t cover the aircraft or the pilots. However, most owners opt for crew insurance coverage that takes care of accidents and loss of license, providing extra protection for the crew.

According to BWIFLY, the standard liability limit for Gulfstream jets are between $1,000,000 and $500,000,000. It covers the policyholder from injury and damage done to property resulting from the operation of the aircraft. In addition, these policies offer limited liability coverage of $100,000 to $1,000,000 per passenger (which is part of the total liability amount).
Management
Large aircraft like the G600 need management teams to run it efficiently because there is too much to organize for an owner or crew.

If an owner opts for an aircraft management service, essential tasks like keeping the aircraft maintained and airworthy, sourcing crew, even stocking the aircraft with food will all be taken care of. If not, it will be left in the crew’s hands, which could prove to be inefficient.
Miscellaneous Fixed Costs
These are surprise costs that can occur over the year for the aircraft.

For example, a software upgrade for the avionics or purchasing newer flight charts aren’t too likely but could arise. Therefore it is good to factor this into the annual fixed cost. 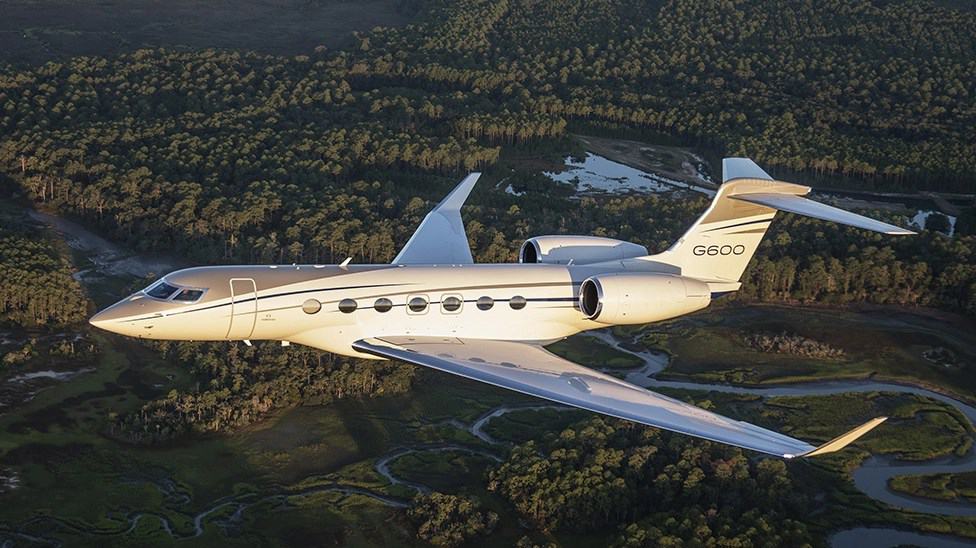 Some costs increase with the usage of the aircraft, which are variable costs. There are several variable costs that apply to an airplane, but the main categories are fuel, maintenance, operating fees, etc.

Below is a table for all the main categories of variable costs and the cost per hour if the aircraft is used for 300 hours over the year according to guradianjet.com:

The highest variable cost for any aircraft is fuel, and this is especially true for jet aircraft. For example, the Gulfstream G600 burns on average around 458 gallons per hour, but this is a ballpark figure and varies wildly based on the altitude and other performance factors.

Another variable to the cost of fuel is the location at which the crew will refuel the aircraft. Certain FBOs charge much more than others for the same gallon of fuel. For example, at the beginning of 2020, in the United States, a metric tonne or 1000 kg (2,204 lbs) of Jet-A1 cost $650, but the COVID-19 pandemic has caused a significant reduction in oil prices. The same metric tonne of Jet-A1 cost $450 one year later, and as of May 2021, prices of Jet-A1 have reduced again to $200 per tonne. So it’s safe to say that as travel restrictions are lifted, and air travel picks up again, the price will increase, and fuel for each journey will cost a lot more.

Operating costs are other costs associated with flying the aircraft, such as crew fees and landing fees. However, it’s complicated to estimate these costs as they heavily depend on the route and conditions.

Crew fees can consist of accommodation and stipends for food and other expenses. Other costs that are dependant on the location are landing fees and handling fees. In cities like Los Angles, where the cost of living is high, the fees will increase directly, and in areas like North Dakota, the fees would be considerably lower. 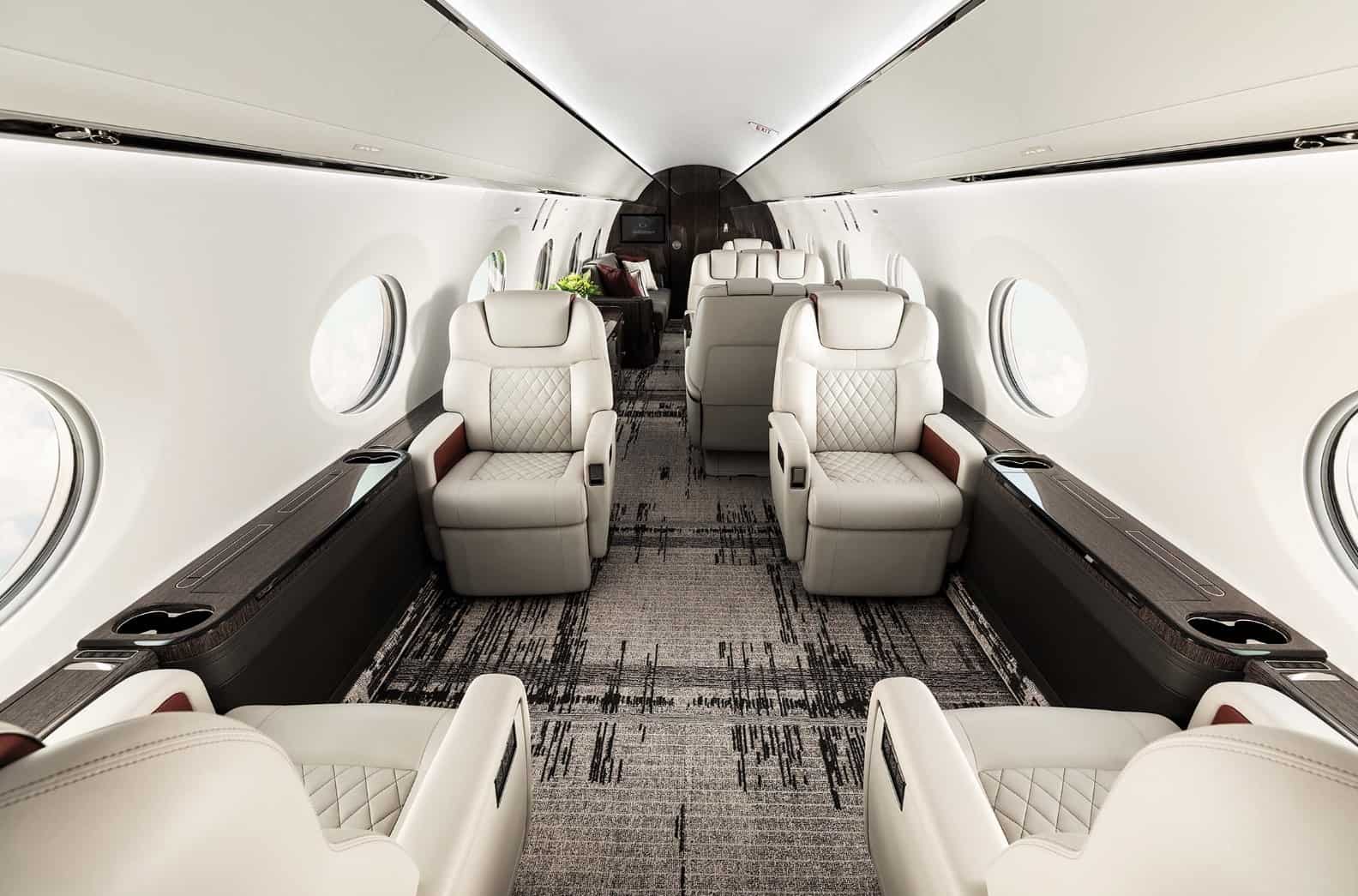 After fuel, the following significant cost is maintenance. Each hour the aircraft flies directly affects the cost of maintenance because of the wear and tear the components go through during their use.

Inspections are required every 100 hours by FAA law, and there is also manufacturer-required maintenance that can occur at different time intervals. While maintenance for components and inspections is predictable, unpredictable maintenance such as flat tires also has to be accounted for and factored into the hourly maintenance because these occur as a direct result of the aircraft being utilized.

There are miscellaneous costs that come up now and again. Costs that we cannot predict. For example, parking the aircraft in a hangar or landing at an alternate airport due to unforeseen weather incur parking and landing costs.

The G600 has two major competitors: the Dassault Falcon 8X and the Bombardier Global G6500. The following figures are sourced from the air.

As far as price goes, both the Dassault Falcon 8X and the Gulfstream G600 are priced similarly, with the Falcon being $500,000, but the Bombardier Global G6500 $2,600,000. However, in the long run, it could end up being a little more expensive than the other two because it costs more to operate.

Question: What is Mach Number?

Question: What is Payload?

Answer: The payload is considered to be the available weight of the passengers and cargo (baggage included). Therefore, most aircraft manufacturers try to maximize the aircraft’s payload as the more weight it can haul, the more attractive it is.

Question: What is the Fuel Capacity on Gulfstream G600?

Here’s How Much it Costs to Fuel a Private Jet. (2021, March 9). Compare Private Planes. https://compareprivateplanes.com/articles/cost-to-fuel-a-private-jet

The real cost of owning a business jet. (n.d.). Retrieved September 4, 2021, from https://aerospace.honeywell.com/us/en/learn/about-us/blogs/the-real-cost-of-owning-a-business-jet