The Cessna 175 entered the scene after successfully introducing the Cessna 172 and Cessna 182 tricycle gear series. Cessna found themselves in an awkward position: the versatile Skyhawk was a little too slow for some owners, but the Skylane was too expensive of an upgrade despite having adequate performance. To solve the issue, Cessna married a similar configuration to a novelty geared Continental GO-300 Engine.

The Cessna 175 (later branded Skylark) delivered on its promises, but despite being a relative hot-rod while staying well below the Cessna 182 price tag, many pilots failed to get accustomed to the peculiarities of the GO-300. The production run was concluded in 1962, only four years after its start, with a respectable 2106 units built.

During the first three years, sales were blistering, but as engine overhauls approached, many of those who mishandled it began missing the more forgiving nature of the 152, 172, 182, and their taildragger predecessors. The airplane earned an unfair reputation as unreliable, and production ceased, but those who stuck through with the Cessna 175 have found it to be an excellent plane that only asks for a little more care from the pilot. 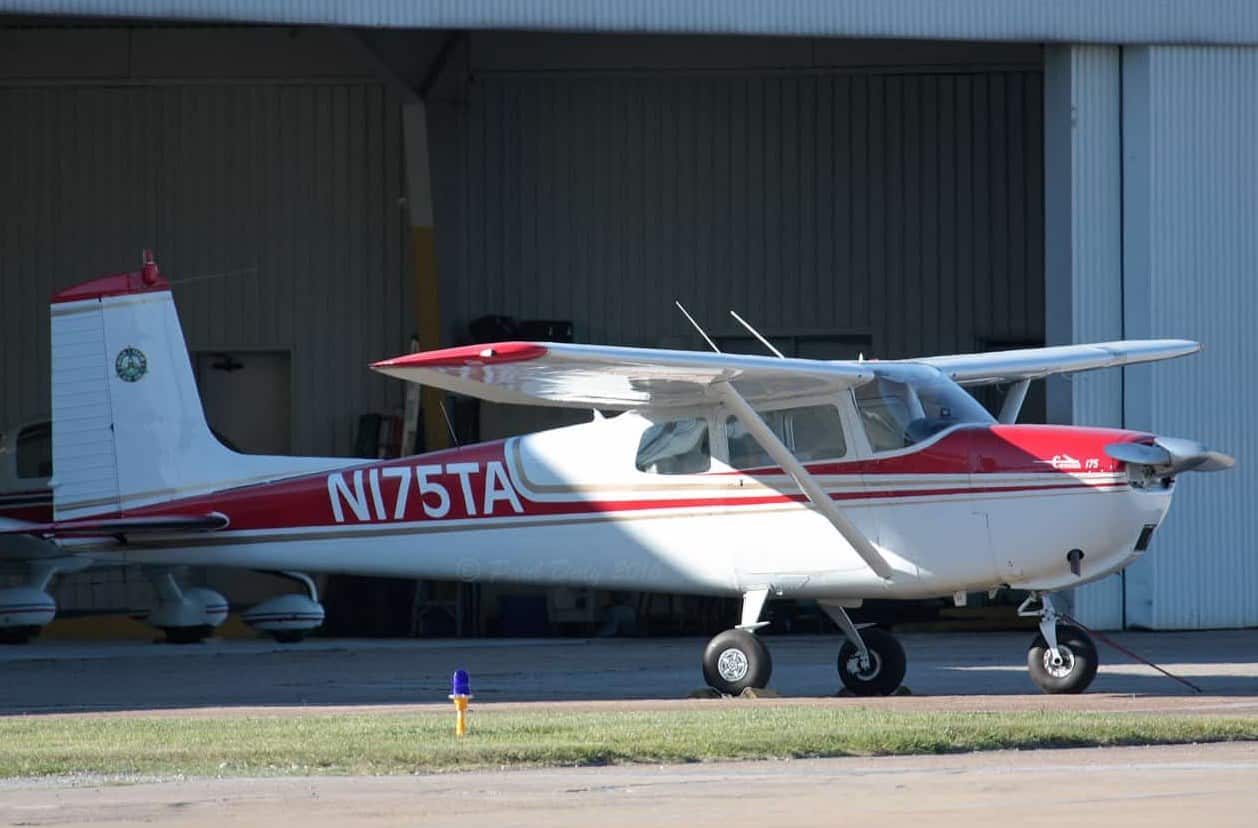 In standard configuration, the Cessna 175 seats one pilot plus three passengers. The baggage capacity was initially set at 115 lbs, with a marginal expansion to 120 lbs towards the end of production.

Unlike most commercial Cessna offerings, the Cessna 175 does not have any in-house long-range fuel tank options. Following the economic cruise profile gives pilots a full range of 720 miles (630 nmi), including reserves. The fuel is stored in two 26-gallon wing tanks and is gravity-fed through the selector valve and strainer to the calculator.

A special feature of the Cessna 175 is the use of a geared version of the Continental O-300 engine, branded the GO-300. This was a six-cylinder engine with 300 cubic inches of displacement. It was carburated, able to produce 175 hp, and paired with a constant speed propeller. When outputting 75% of available power, the GO-300 has a fuel burn of around 11 gallons per hour.

The aircraft’s systems are powered by a 12-volt DC generator coupled to the engine plus a 12v storage battery.

The Cessna 175 was sold for a measly $10995 back in 1958. For comparison, in the same year, the Cessna 172 retailed for $8995 while the Cessna 182 ranged from $14350 to $16850 depending on the configuration. Due to the 175’s blend of large plane performance but with a small plane price tag, it sold very well during its brief production run. Check out our complete guide about the Cessna Plane Types and Models here for more details. 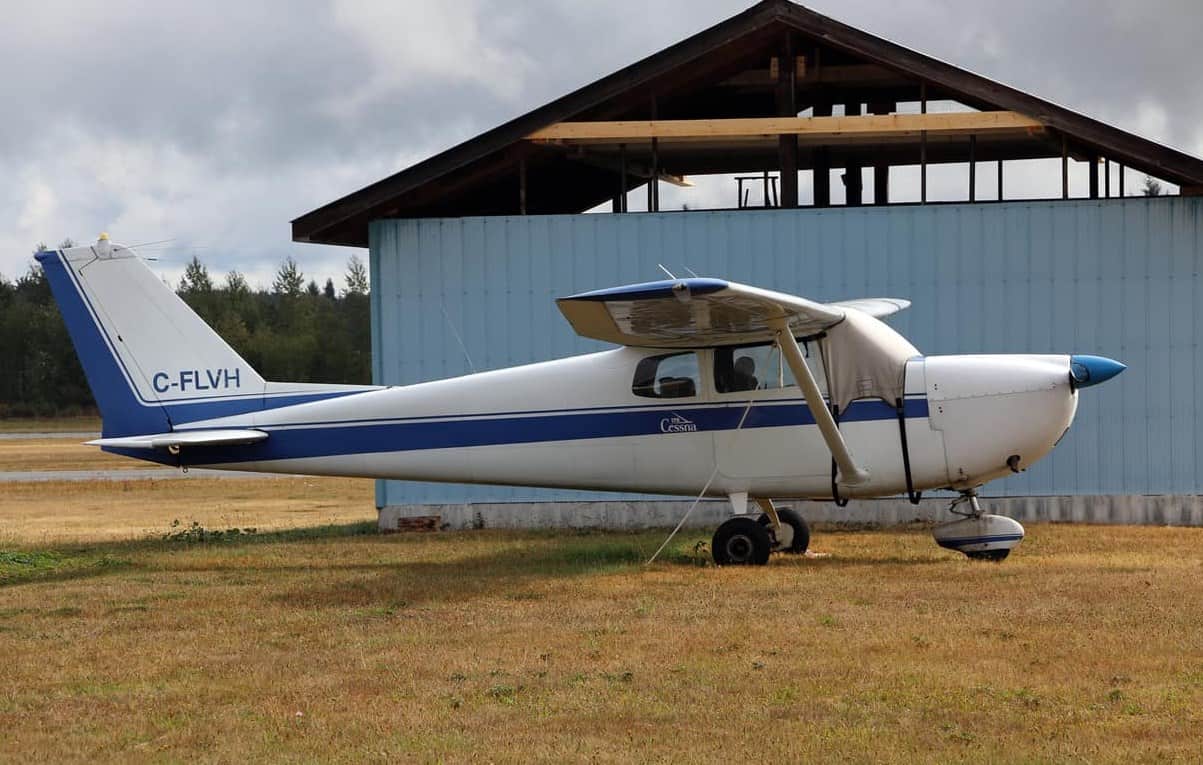 Handling and performance on the Cessna 175 are easy to foretell for any pilot familiar with the aircraft’s design choices and the trademark characteristics of Cessna high wings. The aircraft is aerodynamically similar to the Cessna 172 and shares many of its structural components.

The Cessna 175 Skylark is certified for both daytime and night VFR flying, though it may be equipped for day and night IFR as well. Despite not being rated for aerobatics under the normal category, some maneuvers are still permitted according to the pilot’s operating handbook.

The Skylark boasts a higher top speed and better landing and take-off performance in short fields, making it a viable alternative for those who may need to work off a tight space but are not willing to go down the taildragger route with the Cessna 180 or other bush flying veterans.

The Cessna 175 requires a mere 1205 ft to climb to 50 ft and has an almost identical landing distance of 1200 ft from the same altitude down. Ground handling is made simple thanks to the steerable nose wheel.

The Skylark’s maximum cruise speed is 122 knots indicated, with a do not exceed speed (Vne) of 153 KIAS. Clean stall speeds are 54 KIAS clean for early models and 56 KIAS for latter versions, while in landing configuration, these figures are 46 and 48 KIAS, respectively. The early Skylark climbs at 850 FPM was increased to 950 FPM as production continued.

The main maintenance item on the Cessna 175 is its geared Continental GO-300 engine, with a time between overhaul of 1200 hours that may be shorter if the engine is operated improperly. Due to the overall age of the fleet, airframes may develop problems of the expensive kind more frequently than newer aircraft.

Many a Cessna 175 still pack the factory standard radio gear, which is both less reliable and more costly to maintain than newer units. In certain cases, it is advisable to replace it with newer radios for more reliability and lower costs in the long run. 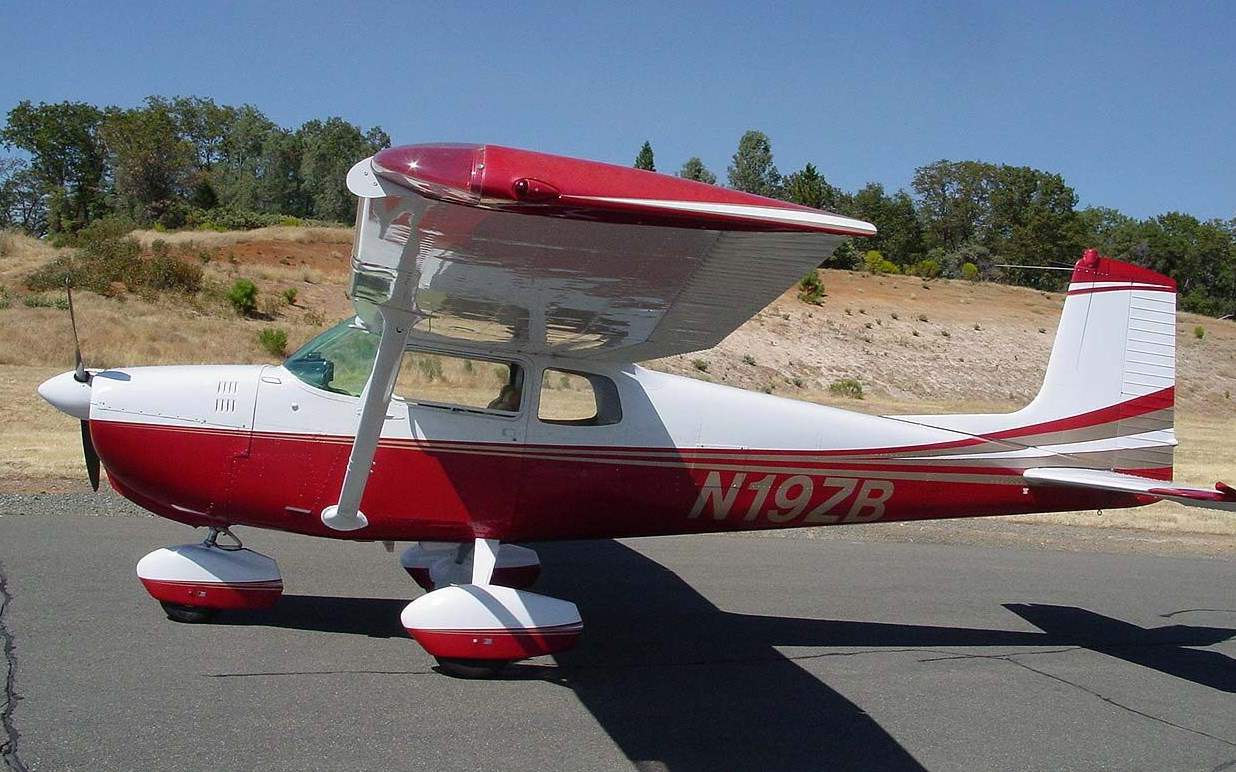 Despite only spending four years in production, the Cessna 175 factory days coincided with a period of change in Cessna’s entire general aviation portfolio. The first major change came two years into production in 1960, with the addition of Cessna’s new windows for better visibility all around, the swept vertical fin that became a staple of Cessna high wings for years to come, and a change in the cowling.

This made the exterior sit tighter around the engine’s lines and reduced the nose’s cross-section. While the drag reductions from this change were negligible, they were mostly motivated by reports of curious birds sneaking through the intake and building nests there.

A push-button starter was added in 1961, while in 1962, the so-called Cessna 175C was introduced with cowl-flaps and a new constant-speed propeller, which brought the gross weight up by 100 pounds.

All versions of the Cessna 175 may be fitted with skis or floats, making it a popular aircraft in regions with limited infrastructure or severe weather. STOL conversion kits exist for pilots who wish to enhance their terrific performance even further. The most popular aftermarket modifications to the Cessna 175 family are the addition of IFR equipment.

Due to issues with engine durability and spare parts procurement, several owners have opted to invest in re-engining their Cessna 175. The most common modification is the Lycoming O-360A1A, an engine more expensive to acquire but cheaper to operate in the long run due to its 2000 time between overhaul (TBO) and better parts availability, on top of an eight mph increase in top speed. Another popular alternative is a Franklin O-500 engine, which runs at 2500 RPM and outputs 215 hp.

Cessna 175 / Where to Find Replacement Parts

While the Cessna 175 line enjoys the widespread Cessna distribution network worldwide, one issue owners have reported is the difficulty in finding parts for the GO-300 engine. This particular model of the Continental that powered thousands of other Cessnas through the years was not nearly as popular as its peers among pilots.

Handling problems stemming from unfamiliarity with the geared engine have caused plenty of engines to be used up much faster than predicted, eating into the spare parts supply that is also limited by the Cessna 175’s relatively short production run. For those that do have access to GO-300 parts, owning a Skylark is a walk in the park. There are over 1000 Cessna 175 actively registered with the FAA as of 2017.

Most owner and pilot grievances related to the Cessna 175 are centered around the Continental GO-300 engine and its reliability. Some of these are justified, while others are rooted in old habits dying hard and a poor understanding of the geared engine’s peculiarities.

The gearbox on the GO-300 allows the engine to turn at 3200 RPM while the propeller puts out 2400 RPM. The higher engine speed brought about more power and a higher top speed but also increased the rate at which components suffered from mechanical wear.

The time between overhaul (TBO) on the GO-300 is of 1200 hours, but plenty of owners report the engines rarely meet this metric. A big reason for this is that most pilots that transition to the Cessna 175 have previous experience on aircraft like the Cessna 172 and thus are accustomed to engine rotation parameters in the 2000s, with a redline that is actually below the 175’s recommended speeds.

Most instinctively bring the GO-300 below 2800 RPM, which only worsens the situation. Experience has shown the engine on the Cessna 175 is more comfortable at around 3200 RPM, with a bare minimum of 3000 RPM.

The beefier engine also comes with cooling peculiarities – it is important to climb at higher airspeeds than other comparable Cessna aircraft because the GO-300 requires additional airflow to keep temperatures cool.

Buyers must keep an eye out for heat damage on used Cessna 175 types from both improper climbing procedures and RPM settings. Some aircraft may experience issues with the motor mount, though the airworthiness directive related to that has been out for long enough that almost any Cessna 175 in flyable condition today will have had it corrected.

The 80-octane fuel is not only the minimum but also the recommended maximum for the aircraft, and of the 52 gallons held in the tanks, only 43 are usable.

A well-maintained Cessna 175 can usually be found for $20000 to $35000 depending on its specifics, making it a very affordable aircraft for those seeking a powerful aircraft but who do not need all the gizmos on the Skylane series. 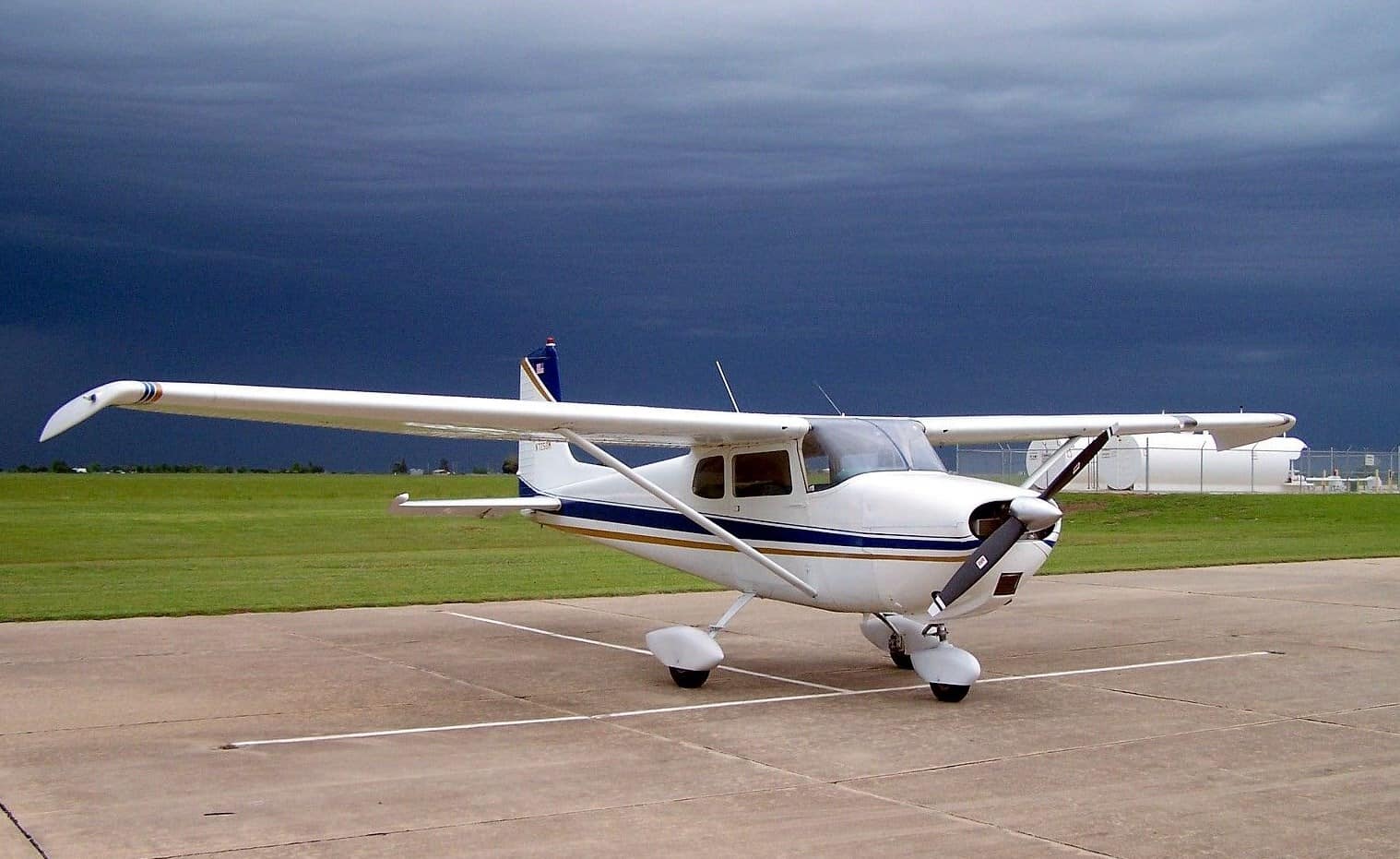 The Cessna 175 Skylark is popular with most owners. It is a good performer, sturdy (more than the venerable 172, depending on who you ask), and predictable. Many Skylarks earned an unfair reputation as unreliable due to poor handling. Cessna 175 enthusiasts that stuck through the adaptation period swear by the aircraft, however, and blame the issues on pilots not paying enough attention to the operator’s manual.

Pilot Dale Pehrson mentions in an AOPA interview that his 1959 Cessna 175 costs around $80 per flight hour in a 100-hour year, making the Skylark a rather affordable but zippy aircraft. According to Bill Cox of the Cessna Owner Organization, the use of reduction gear makes cruise a more comfortable affair thanks to the slower speeds at which the propeller turns, leading to reduced noise in the cabin.

Compared to the cheaper and lighter Skyhawk, the Skylark is recommended for pilots who need more oomph, like those regularly taking up all seats, carrying heavy loads, operating off short runways, or at high altitudes.

There are few aircraft directly comparable to the Cessna 175 Skylark, with the closest competitors coming from Cessna’s upper and lower brackets. Owners looking for a more affordable ride may find a better

The two main clubs for Cessna 175 owners are the Cessna Flyer Association and the Cessna Owner Association. These are global clubs that cater for owners of all Cessna types and are some of the best type clubs in the world through both experience and sheer size.

Question: What is the difference between Cessna 172 and 175?

Answer: The main difference between the Cessna 172 and the Cessna 175 is that the Cessna 175 has a geared GO-300 engine, which gives it better performance at the expense of shorter maintenance intervals.

Question: How much does a Cessna 175 cost?

Question: What is the range of a Cessna 175?

Question: Is the GO-300 engine reliable?

Answer: Yes. Pilots with Cessna 175 experience report that it is a very reliable and capable engine so long as the limits outlined in the pilot’s manual are followed.