When 9,490 aircrafts of a specific model sell in a 14-year production window, you know the designers have got it right. In 1950, the Tri-Pacer leveraged off the success of its much-loved sibling, the Piper Pa 20 Pacer, and went on to become a legend.

Until that time, most aircraft produced had a conventional undercarriage arrangement, with two main wheels just forward of the aircraft center of gravity and a tailwheel aft of the vertical stabilizer. Requiring more dexterity when taxiing and taking off, and landing, history abounds with incidents and accidents where pilots got it wrong.

The introduction of the Tri-Pacer with a tricycle undercarriage, having a nose wheel just aft of the propeller and two main wheels slightly aft of the aircraft’s center of gravity, was an attempt by Piper to make flying a little easier and safer. The tricycle undercarriage allowed directional stability and better visibility when taxiing. This design, coupled in 1955 with more powerful 150hp and 160hp engine options than the 135hp Pa-20, created tremendous interest in the Tri-Pacer.

A steel-tube and fabric, high-wing, strut-braced single-engine configuration aircraft with four seats, the higher horsepower Tri-Pacer can turn in a solid short-field performance, lifting a reasonable load with full fuel. Unfortunately, the same can’t be said for the first Tripacers powered by 125hp and 135hp Lycoming engines. Carrying four passengers in those models meant you weren’t going far due to the small fuel uptake permitted by the maximum aircraft weight.

However, a large interior, strong airframe, and attractive cruise speeds of 105 to 110 knots attracted customers. The inclusion of flaps, control yokes instead of control sticks, and separate doors for passengers and pilots provided a modern, performing aircraft at a reasonable price. 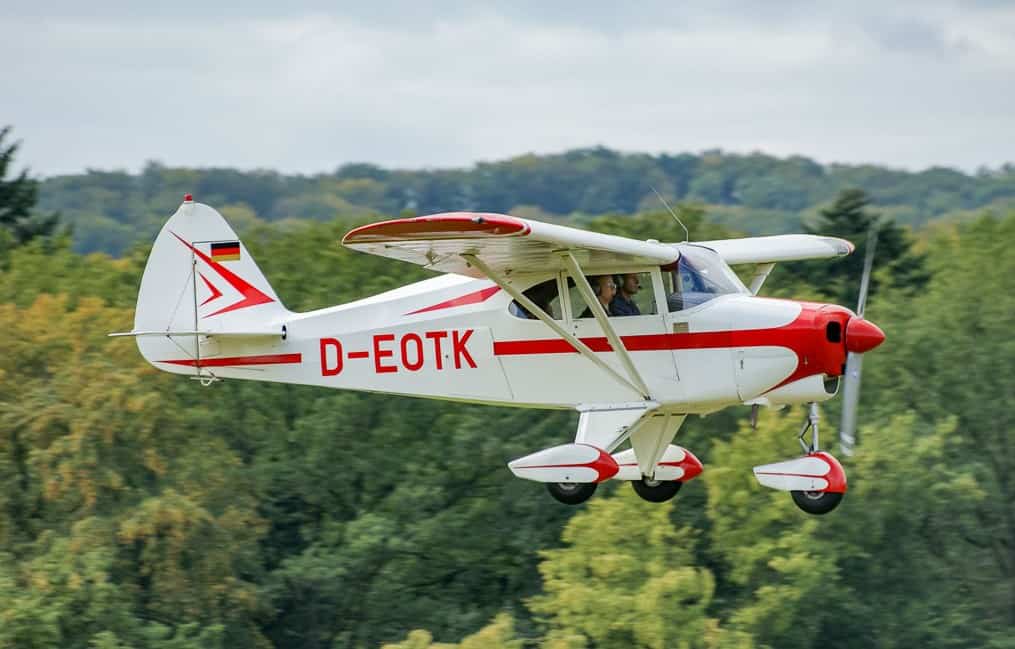 Owners describe the Tri-Pacer as a lovely aircraft to fly, or as one owner put it, “embarrassingly easy.” With the rudder aileron interconnect, turns don’t require too much fancy footwork, with the controls balanced and light. With such a light wing-loading, the aircraft moves about in turbulence; however, it is relatively stable as long as you don’t require hands-off flying. Stalls are mild to almost non-existent, with the aircraft not dropping its nose dramatically. Descent rates increase, and the aircraft mushes down.

The overriding handling issue with the Tri-Pacer in the air is the need to maintain power on approach. Pilots tell stories of carrying too little power on final and seeing very high sink rates develop, leading to a nickname of “the flying brick.” Nailing your approach speed and maintaining power through the flare is essential to perform an arrival resembling a landing.

On the ground, other dynamics come into play. The aircraft sits high, has a narrow main gear track, and directs steering from the rudder pedals to the nose wheel through push-pull rods. Such geometry makes taxiing a study in slight, gentle rudder inputs to prevent dramatic swerves. When the wind is strong, things can get lively. Maintaining proper control surface deflections during taxi will help prevent ending up on your back, while sharp or fast turns can spell disaster. None of these tendencies are assisted by the brakes being hand operated. 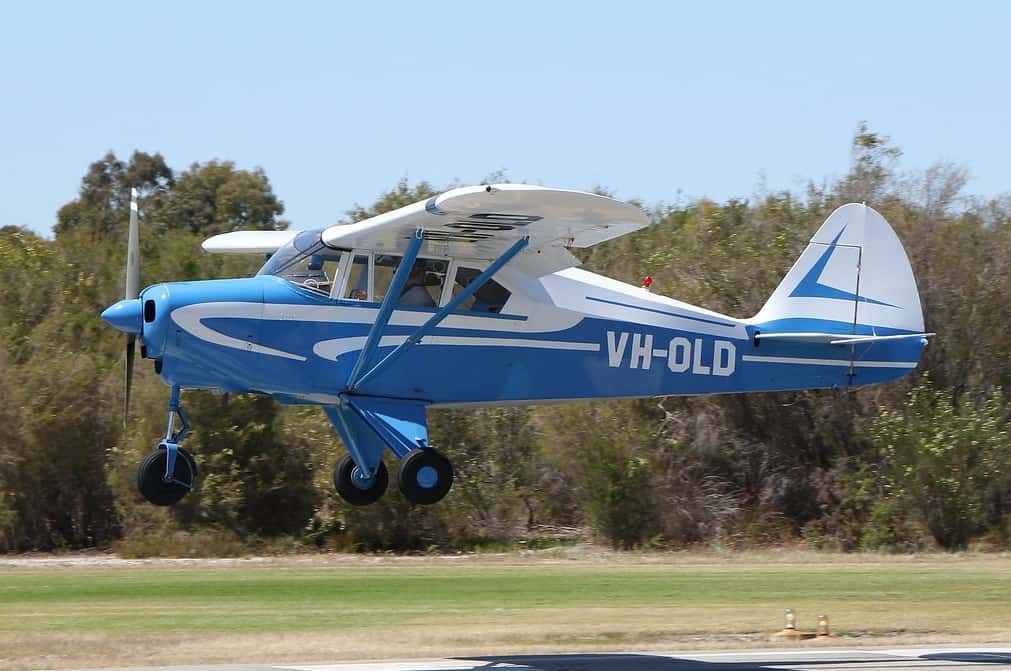 Maintenance costs are not excessive on the Tri-Pacer due to its straightforward and robust design. Annual inspections are straightforward and inexpensive, as are the 100-hour maintenance inspections. As with its sister Pa-20 Pacer, one problem to watch for is corrosion in the airframe tubing. Predominant corrosion areas are in the aft fuselage longerons and the tail structure. Corrosion can also be found in and around the structure of the door.

AD AD 99-01-05 is of note, which supersedes AD 93-10-6. The requirement is to inspect the wing struts and the wing strut forks. The first for corrosion, the second for cracking. Periods are annually for strut inspections, accompanied by the application of rust inhibitors. The crack inspection is every 500-hours, with a fitting replacement life of 2,000-hours. The new fittings have rolled threads rather than cut.

Another issue reported by owners is a slow or no cranking fault on starting, which is down to battery cables failure. Most owners replace their cables with a larger copper cable which solves the problem.

There are many modifications available for the Tri-Pacer. The most popular mods address the known foibles.

Bogart Aviation in Washington, at https://bogertaviation.com/, provides a new battery box and cables to address the known issue with slow or no cranking when starting. There are also mods to replace the under-powered generators with alternators. Brake mods are plentiful, with the Williams and Univair conversions highly mentioned in Tri-Pacer forums. These STC-approved mods either fit new disc brakes, replace the hand brake with toe braking, or both.

Univair and Airframes Alaska offer lifetime sealed lift struts to remove the need for ongoing wing strut inspections mandated by the AD. Some owners chose to re-skin their aircraft with aluminum, while others have converted the Tri-Pacer to a conventional undercarriage configuration, similar to the Pa-20 Pacer. There is also a mod to replace lower power Lycoming O-290 with the 160hp O-320, although this does require wing strengthening.

Pa 22 – Where To Find Replacement Parts

Generic parts are readily available at places like Aircraft Spruce, Preferred Airparts, and Aircraft Supply. However, for Tri-Pacer specific parts, the name that most crops up in conversation is Univair. Found at www.univair.com, Univair specializes in vintage aircraft part supply, and they hold STCs for several Tri-Pacer modifications. For an aircraft of such venerable age, sourcing spares does not appear to be an issue.

The lift-strut AD we discussed earlier is a well-known issue; however, owners do have the ability to fit a sealed strut to remove the maintenance requirement. Airframe corrosion can be a concern, with inspections hampered by the long life we now get from the Ceconite, Polyfiber, or Superflight cloth now used to cover aircraft.

Since some fabrics can last 20-years when adequately looked after, corrosion problems can be hard to identify. Some owners insist on recovering their aircraft every 10-years allow airframe inspection and ensure airframe integrity, even though the fabric will endure beyond that period. Finally, resolution of the battery cable and under-powered generator issues is possible by installing larger copper cables and higher power alternators better suited to today’s operations and power demands. 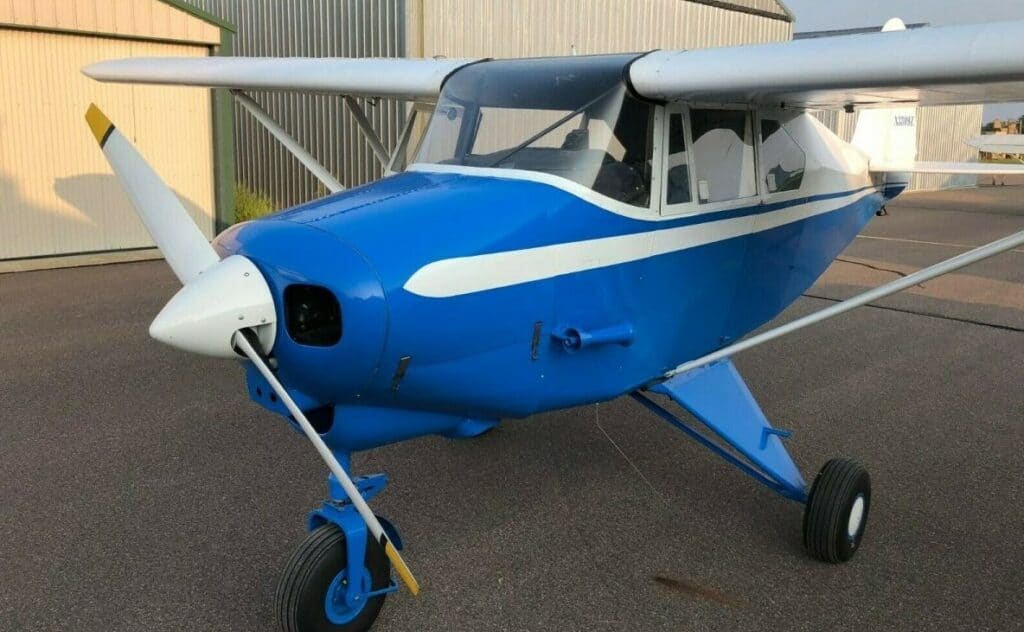 Eight aircraft-related factors are influencing Pa-22 resale. They are:

These eight items are all within the owner’s control and make a considerable difference in the final asking price. The Piper Tripacer has maintained its value remarkably well. In 1955 it was worth US$7,295, and with asking prices today between US$14,000 to US$26,000, the aircraft has not lost a lot of value in 71 years.

Along with its sibling, the Pa-20, the Tri-Pacer must be one of the cheapest four-seater aircraft on the market today. It provides outstanding short-field performance, gentle flight characteristics, acceptable cruise speeds, and low operating costs.

Unsurprisingly, owners wax lyrical about the Tri-Pacer. Reporting between 7 to 9 gallons per hour fuel use depending on engine power, they all speak of the minimal operating costs of a well-looked after aircraft. The Pa-22 appears to compare favorably with the performance of a similar age 172, with lower operating costs. The benign flight characteristics, good load carrying capabilities, solid short-field capabilities, and acceptable cruise speeds seem to be the main topic of conversation.

All owners agree that for load carrying, it’s an aircraft for two people with full baggage, three people with overnight baggage, or four people with no baggage. 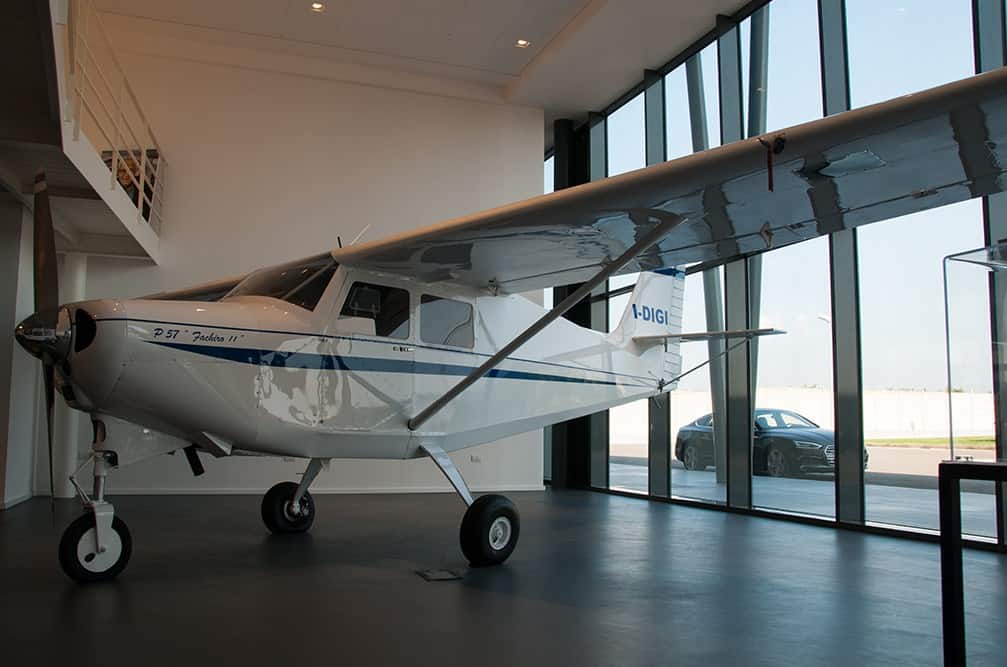 The Piper aircraft that preceded the Pacer and Tripacer were the Pa-15/17 Vagabond and the Piper Pa-16 Clipper. However, the Tripacer’s main competition was the Partenavia Fachiro, the Cessna 170, and the Stinson 108. All aircraft with similar specifications, although cruise speeds were generally lower than the Tripacer.

If you own a Pa-22 Pacer, you are strongly advised to join the Short Wing Piper Club found at https://www.shortwingpiperclub.org/. With chapters across the US and Canada, the knowledge and support offered to owners is second to none.

Question: What is a rag and tube, or fabric-covered aircraft?

Answer: The aircraft fuselage is constructed of steel tube, with a tightened or shrunk fabric covering, which is sealed and painted.

Question: What are longerons?