Classics die hard, and few aircraft prove this as much as the Learjet 60. Produced until 2012, this iconic aircraft was the very last of the Learjet series which was still based on the 1960s Learjet 23 designed by Bill Lear based on the Swiss FFA P-16 fighter prototype. All Learjet aircraft have been famed for their clean lines, eye-watering performance, and low operational costs for their class, and this mid-sized business jet is no exception.

The Learjet 60 was a further evolution of the family’s Model 55, building upon its large passenger cabin and expanding it by another 11%, or 43 inches. This traditionally seats six passengers, four in a club configuration and another two facing forwards, though it is possible to bring the number up to eight depending on the floor plan chosen. Other comfort improvements include a larger galley, a baggage area with 59 cu ft, and electronic power ports for charging mobile devices.

As of 2012, the Learjet 60XR retailed from $6 million to $7 million, depending on which optional features and add-ons were selected by the customer. 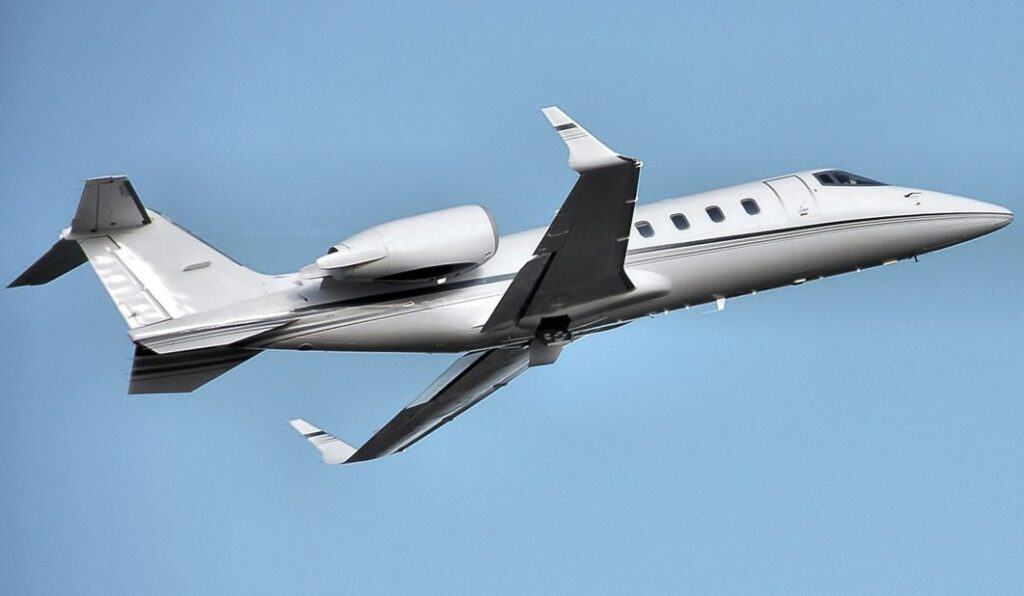 Breaking tradition, the Model 60 is the first aircraft in the Learjet line to use Pratt & Whitney Canada engines instead of Honeywell or General Electric makes. Rated for 4600 lbf each, the PWC305A turbofan helps the Learjet 60 outclimb all competitors in its class, clocking above 6000 fpm (feet per minute) up to its ceiling of 51000 feet, with the stunning Mach 0.81 cruise speed achieved by all members of its family. Not only does it outclass aircraft in performance, but it also does this while boasting better fuel consumption. Its maximum take-off weight is 23500 lb (10660 kg), with a range of up to 2409 nmi (4461 km) plus a 100 nmi (190 km) reserve.

Originally, the program which gave birth to the Model 60 was aiming at improving the Model 55 aerodynamics to increase the line’s capacity, as it was starting to be outpaced by the competition.

The famous Longhorn wing received extensive modifications to highlight its advantages while negating undesirable effects that had been identified. These came in the form of a new wing cuff on the inboard sections, which increased the wing chord and leading-edge droop for better handling during approach and landing, and a redesigned wing-to-body fairing that reduced drag.

The winglet’s trailing edge was changed to have an ogive shape. By lengthening the chord near the transition between the wing and winglet, the longstanding issues with the Longhorn winglets were finally remedied, creating significantly less drag. Prior to this change, the interference between the winglet and the wing generated so much drag that the winglet’s benefits were almost entirely negated.

In the fuselage, the Model 55’s single ventral fin was replaced by a pair of them, baptized “Delta Fins”, which improved stall characteristics and aerodynamic stability. 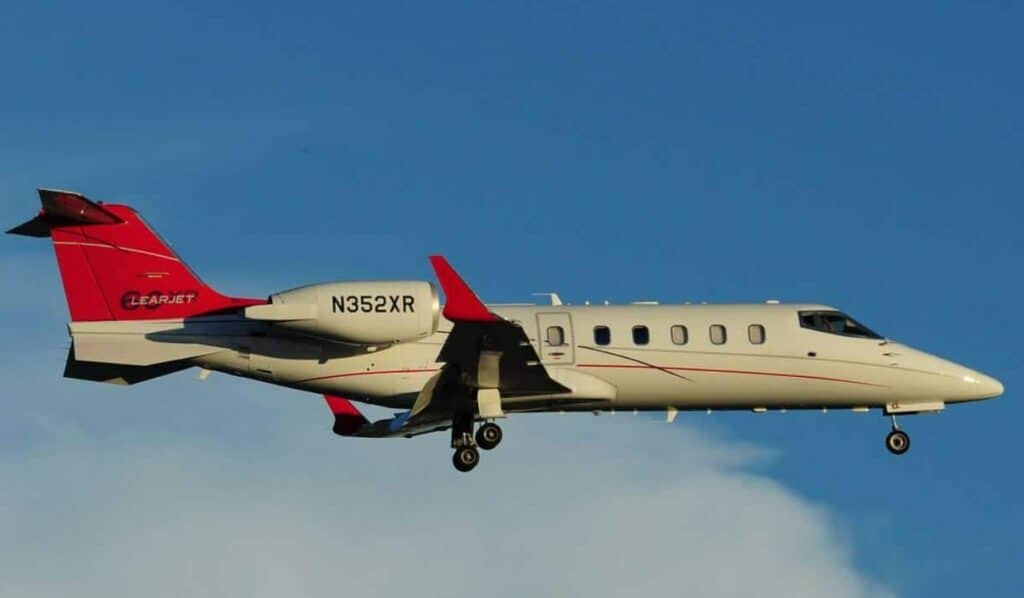 According to the original Learjet 60 maintenance manual, the aircraft has a hard-time mid-life work scheduled at the 2500 hours mark, normally priced at $360000 in most authorized shops. After that, it can be flown until 5000 flight hours are reached, at which point owners must take it for an overhaul which costs $720000.

The Model 60’s powerplant, a pair of Pratt & Whitney Canada PW305A turbofans, is quoted to have an hourly rate of $260 and an inspection interval of 6000 hours.

In recent years, Bombardier Aviation has worked on extensive redesigns of the maintenance intervals for business jets under their wing, including the Learjet family members manufactured by the Canadian company.

This program has attacked maintenance schedules from two angles: reducing the number of tasks per scheduled inspection or overhaul to reduce their overall cost and extending the time between them to allow owners to fly their aircraft longer, all while keeping operational safety at a high level. According to some operators, these changes in maintenance have lowered costs by as much as 50% in some models, making them very welcome developments for Learjet owners.

Analysis of data from Learjet 60 owners shows an hourly maintenance cost of $255, plus $612 for engine reserves, adjusted for a total of 300 yearly flight hours.

The Learjet 60 family has two main variants, the Model 60 and Model 60XR.

The Learjet 60XR was first presented in 2005, with deliveries starting from 2007 onwards. It fully replaced the Learjet 60 in the production line. Despite being built in the 21st century, it still had enough commonality with the original Robert Lear design to still be filed with the 1966 type certificate originally granted to the Learjet 24.

As an evolutionary variant, the Learjet 60XR was built to address common complaints and problems inherent to the Model 60. As the original design was characterized by being chronically ‘under-braked’, Bombardier installed new sets of three-rotor disc brakes that improved performance on the runway.  The cockpit was upgraded to the Rockwell Collins Pro Line 21 standard, packing a more accurate AHRS (altitude and heading reference system) and a new, more robust FMS (flight management system), built-in electronic charts, modern MFDs (multifunctional displays) plus an option for XM radio weather.

For passengers, the cabin was redesigned with five different floor plan options depending on the seating desired by the operator, with LED lighting for both better comfort and safety in case of emergency evacuations, improved insulation, and a new cabin management system.

Learjet 60 / Where to Find Replacement Parts

As it was manufactured during the Bombardier era of the Learjet line, the Model 60 is supported by the Canadian company. Being one of its last designs, with production finishing only in 2012 after over 400 units were built, it has an abundance of parts in the market. Owners also have access to the Bombardier global part inventory index, a new service that allows registered users to check the stock situation for spare parts and get in touch with suppliers from around the world with one click. This has helped overcome some of the supply difficulties experienced by Model 35 owners, who have had to contend with an aging fleet but plenty of competition for the limited part stocks.

In the wake of the Learjet line’s end, Bombardier Aerospace has initiated a program to increase the availability of parts for all aircraft in the Learjet family, with results slowly being felt down the supply chain, including for older models. 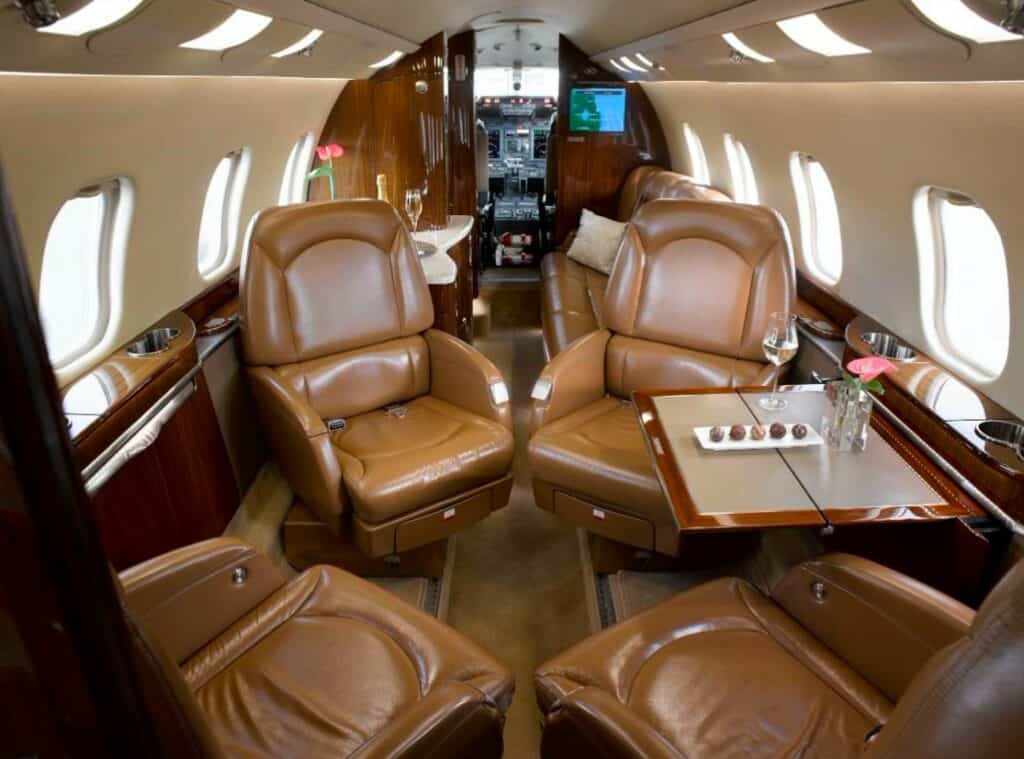 While blessed with blistering performance, the Learjet 60 developed a bad reputation among its peers for having the highest accident and incident ratio of its class, particularly during landing. The lead cause of these issues is the evolutionary design. All Learjet models up until the Model 60 and Model 60XR were still direct descendants of Bill Lear’s very first Learjet 23, and most structural components could be traced back to it.

By the time the Learjet 60 had entered the scene in 1993, the Learjet family had undergone severe modifications to keep the fleet competitive. The fuselage was constantly expanded for additional passenger comfort, the wings underwent significant redesigns with each iteration to improve the Learjet’s already excellent performance and handling, the engines were replaced multiple times, among other modifications, all of which influenced the aircraft’s weight and its distribution. However, the landing gear and wheels remained the same between all Learjet models the Model 23 and Model 60.

Owning to similar problems present on the Learjet 55, Bombardier attempted to remedy this with a third brake rotor on the Model 60, but it was ultimately not enough. The Learjet 60 is often described as ‘under-geared and ‘under-braked’, though analysis of accidents and incidents involving the type shows that the overwhelming majority of them occurred due to pilot error. The limited gear and braking capability do not create hazards per se but make the aircraft more unforgiving towards mistakes when landing or aborting take-offs. The braking problems have been largely remedied by the introduction of the Learjet 60XR, which installed a more capable set of three-rotor disc brakes.

In 2020, an airworthiness directive was issued by Bombardier mandating the installation of an additional voice alert related to thrust reverser deployment issues, with a deadline of June 25th, 2022. These were a consequence of two accidents, in 2001 and 2008, where pilots were not aware of the reverser failing to activate.

For 300 yearly flight hours, a Learjet 60 can be insured for around $39500, with hull insurance said to orbit the $4500 mark while liability insurance makes up the other $35000. This value is somewhat above numbers quoted for a smaller member of the Learjet family, but it is reasonable when considering the larger dimensions, capacity, and consequentially higher cost of the Learjet 60 compared to its predecessors.

Most Learjet 60 owners are original ones happy to keep the aircraft to themselves though – despite clocking just over 400 units produced, research shows a grand total of 9 have been put up for sale, and units that hit the market typically do not stay there for very long. For a prospective owner, what this means is that an eventual sale can be concluded in short order and with a good asking price.

In terms of performance, the Learjet 60 is lauded with the same praise familiar to all of its predecessors – it is fast, climbs better than anything in its class, pleasant to fly, and for some daredevils, it can even do aerobatics in controlled settings with some modifications. The redesigned wing and fuselage fins have taken that world-beating performance and married it to good low-speed handling and even better acceleration, to the delight of pilots and owners alike.

Where the Learjet 60 shines brighter than its peers is the lavish interior, particularly in the definitive Model 60XR version. The curvaceous cabin lines are married to with tasteful LED lighting, larger windows, an expanded galley that at the same time more aesthetically pleasing, and a redesigned lavatory that packs a vanity cabinet. The aircraft beats previous Learjets in both artificial and natural lighting availability and control. The screens in the cabin have fewer but more streamlined menus and can easily be connected to passenger gadgets, including mobile phones, laptops, or DVD players. Equipment for onboard Wi-Fi can be installed optionally.

These changes make the Learjet 60XR extremely pleasant to fly in even for longer, transcontinental routes. 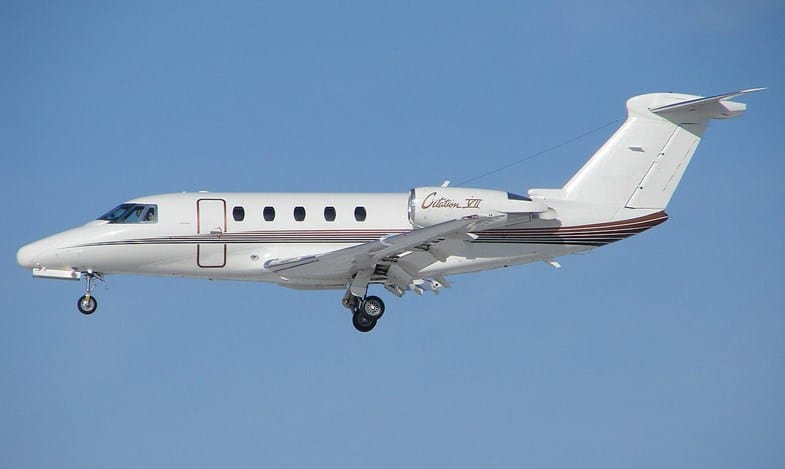 The Learjet 60’s chief competitors in the mid-sized business jet class are the Cessna Citation VII, the Gulfstream G150, the Hawker 800XP, the Dassault Falcon 20, and the Embraer Legacy (now Praetor) 500. There are pros and cons to each design, though all of them are considered excellent business jets and have many years of safe and cost-efficient operations to back them up.

Learjet 60 / Clubs You can Join

Due to its primary business operations, the Learjet 60 does not have a major type club. However, its popularity makes it surprisingly easy to come across both pilots, owners, and operators across the world to trade information and tips with.

Question: What is the Learjet 60?

Answer: A turbofan-powered mid-sized business jet with a capacity of up to eight passengers.

Question: When was the Learjet 60 introduced?

Question: How many Learjet 60 were built?

Question: Is the Learjet 60 Single-Pilot Certified?

Answer: No, a crew of two is required to fly the Learjet 60 and its derivatives.

Question: Is the Learjet 60 safe?

Answer: Yes. Most of its accidents were due to pilot error, but Bombardier has implemented additional safety measures to remedy issues that may have previously aggravated those situations.

Question: What is the range of a Learjet 60?

Answer: It can fly up to 2400 nautical miles, including a 100 nmi reserve, when carrying four passengers.