Introduced in 1962 as a more powerful version of its older ‘Apache’ sibling, the first Piper PA 23 Aztec featured 250 horsepower, normally aspirated Lycoming engines, a swept tail, and seating for five. Manufactured until 1982, the model moved through series A through F.

The Aztec B series rapidly followed in late 1962, with six-place seating, a longer nose, and some systems changes. The Aztec C series was launched two years later with the trusty injected IO-540-C4B5 series engines or the turbocharged TIO-540C1A. Arriving in 1969 and 1971 were the Aztec D and E series, respectively.

The Aztec D received some control and instrument panel changes, while the Aztec E provided a single-piece windshield and a long, pointed nose. In 1976, the final F-model underwent upgraded systems, cambered wingtips, and extensions to the tail-plane tips.

A great success story, the manufacture of the Piper Aztec ran for 20 years producing almost 5,000 aircraft. Affectionately known by those who fly her as the ‘Aztruck,’ the airplane was never a stand-out in any one class. As a load-hauler with a roomy cabin, docile flight characteristics, good short-field performance, and acceptable fuel economy, the Aztec was in a class of its own.

Today, you will find a wide range of prices depending on the model, total hours, and engine status. Good condition early A or B models with approximately 4,000 TTAF and high-time engines command asking prices of US$60 – 70,000. At the other end of the scale, F models with average hours and low-life engines can sell at circa US$180,000.

Average prices are US$90 – 100,000, with many good condition, privately owned aircraft available. 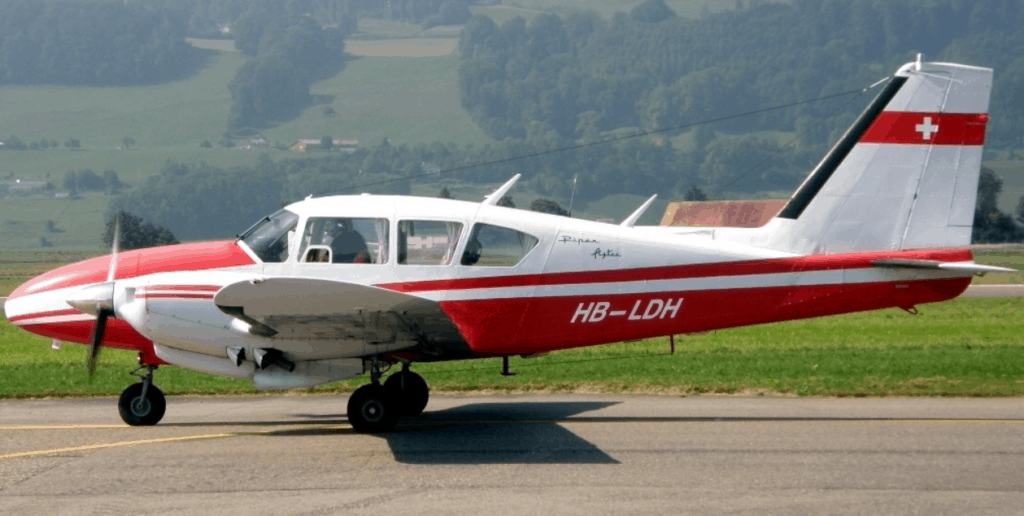 With a similar profile wing to the Piper Cub, it’s unsurprising that the Aztecs is a stable and comfortable airplane without many extras. It can haul full fuel and six passengers with such a high-lift wing, so it’s an excellent load lifter and an ideal first twin for low-hour pilots, with a low VMC of 79 knots and a stall speed of 59 knots.

A stable IFR platform, the aircraft control forces are heavy in roll and yaw while lighter in pitch. With such a high-lift wing and bulbous shape, the Aztec was never a speed demon, with the F model having a max structural cruise of 175 knots and never exceeding the speed of 221. Expect a lower-level cruise to be true out around 150 to 160 knots. Fuel consumption on cruise is adequate, with consumption between 26 to 28 gallons per hour at 75% power.

Single-engine performance is as dire as most light twins, with a single-engine rate of climb in an F series touching 230 feet per minute on a good day.

The Piper Aztec is no more or less maintenance hungry than most other light-twins if looked after. The basic inspections are carried out at 100-hour intervals with mandatory annual inspections; the engines have 2,000-hour TBO’s and the propellers at 2,400 hours.

There are plenty of airworthiness directives (AD), as you would expect from an airplane of this age. Some are quite extensive, requiring repetitive inspections of airframe components, although replacing the components removes the requirement for the AD. 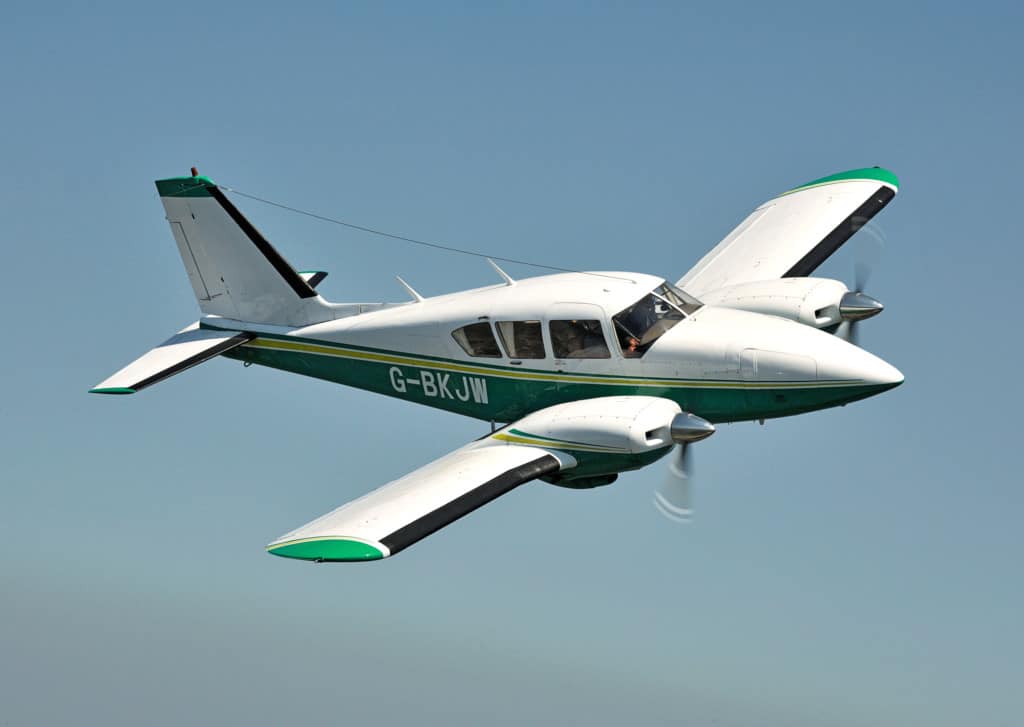 The first stop for a new Aztec owner would be Diamond Aire, a Montana shop specializing in modifications for the Piper Aztec and Apache. From new instrument panels to wing tip modifications, new throttle quadrants, and engine nacelles, Diamond Aire will also provide extensive 1,000-hour major inspections to return your aircraft to a known state.

MICRO Aerodynamics provides a micro vortex generator kit for the Aztec wings that lowers VMC and stall speeds. In addition, I understand a Robertson R-STOL kit is also available for the Aztec, further improving landing and take-off performance while supporting slower, safe speeds, crisper handling, and lower power requirements for take-off and climb-out. There are also modifications to increase fuel tip-tank capacity, manufactured and marketed by Met-Co-Aire, California.

Propeller manufacturer Hartzell has released a new scimitar two-blade propeller that provides a further 2-knots to the Aztec speed.

Pa23-250 Where To Find Replacement Parts

With so many Aztecs produced, many aircraft are ‘parted out’ upon being retired from service. Second-hand or reconditioned parts are available from large aircraft wreckers across the country.

Also, with the rise in FAA-PMA approved manufacturers, many have niched down to support a particular airplane type and finding trim (knots2u, Texas Aeroplastics or AvFab), landing gear components (Aircraft Supply, or Preferred Air parts), or lighting (Whelen Aerospace Technologies or AeroLeds) for your Aztec is not too difficult. The more generic components such as filters, wheels, tires, and brakes are off the shelf and stocked by large aviation suppliers like Aircraft Supply, Aircraft Spruce & Specialty, or Wag Aero.

One well-known area to watch on aircraft like the Aztec and its smaller cousin, the Twin Comanche, is the use of bladder fuel tanks and fuel leaking. Signs of fuel staining around the inboard wing vents are a sure sign of fuel leaking and running down inside the wing to the wing root.

If it occurs when tanks are full, it may be that the seal of the bladder tank at the filler is poor and requires rectification. It may also suggest the tanks are leaking due to bladder porosity requiring repair or replacement. Floats & Fuel Cells in Tennessee provide replacement bladders for the Aztec.

The engine cowls on an Aztec are notoriously time-consuming and difficult to remove and replace. There are now STC mods on the market providing one-piece cowls that will truly repay you in maintenance time saved.

The Aztec was well-known to pitch nose-up quite heavily when first lowering the flaps. Later model aircraft alleviated this through the use of an interconnected system between the flap and stabilator system.

Piper has issued an AD for turbocharged Aztecs that requires replacing the turbocharger oil tank and making some modifications to fire-shrouds to prevent possible in-flight fires. 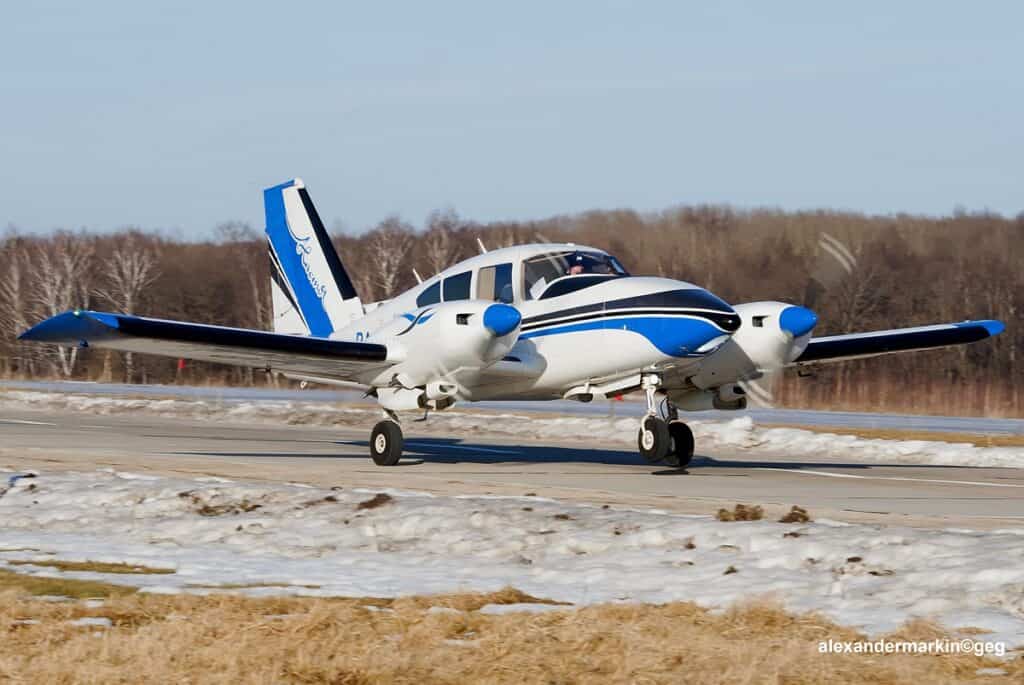 If the insurance includes additional hull cover for US$90,000, the annual premium for the experienced pilot will be between US$1,985 to US$2,240 per year, while the lesser experienced pilot can expect US$2.910 to US$3,760 per year.

These seven items are all within the control of the owner. If an owner has taken a ‘maintenance only as required’ approach to their aircraft, they can expect that the lower resale value will more than recoup the money they might have saved. Those owners who try to operate their aircraft on a shoestring are pursuing false savings.

The Aztec is no better or worse than most twins in that it requires regular maintenance to maintain value. You will find some very cheap Aztecs for sale; however, the price should send up a warning flag, as it suggests some major maintenance is required or the general condition of the aircraft is poor and neglected.

In a reasonable condition, Aztec will command between US$90,000 and US$100,000. The Aztec is a popular Piper aircraft, ideal for training and first-time twin conversions, and therefore it can be expected to maintain resale price if looked after and appropriately maintained.

The caveat is the more significant question on the resale value of twin-engined aircraft in general. With less than 70 twin aircraft manufactured in 2010 compared with thousands in the 1970s, if the demand for twin-engined aircraft continues to drop, it’s anyone’s guess where your resale goes from there.

Of the owner reviews I have read, all speak well of the aircraft. Big, heavy, stable, and roomy are some of the adjectives. Easy to fly, with no bad habits, owners comment on how stable the aircraft is when instrument flying.

Most owners traded off the much lower capital cost of the Aztecs against the higher operating costs. When making comparisons against expensive high-end single-engined aircraft such as the Piper Saratoga or Cessna Centurion, although the operating costs are lower, the economics still work while getting system redundancy as a bonus.

All report cruise speeds between 170 – 185 knots on 27 gallons per hour, in the low tens-of-thousands of altitude. Annuals appear to cost between US$2,500 to US$1,500, depending on age and condition.

Every owner cites the cost of insurance as an issue, and one recommends getting an instrument rating to decrease annual premiums.

The consensus across the owners is that as a cheap, comfortable, and capable twin-engined aircraft, the Aztec takes a lot of beating. None appear ready any time soon to make a change.

Aircraft of similar configuration, age, and role include the Beechcraft Baron 55, Piper Pa-34 Seneca, and the Cessna 310.

All sell in the same price range and have relatively comparable specs. Where the Aztec has the edge, however, is their consistency through those specifications. Each of the contenders outdoes the Aztec in one or maybe two areas. The Aztec is solid across all, whether it’s service ceiling, cruise, short-field performance, cabin space, or the most impressive of them all, its load-lifting capability. You pay your money, and you take your choice, but if it’s a good all-rounder you’re after, as a stable IFR platform, lifting good loads into and out of short fields, the Aztec is hard to go past.

There are no clubs dedicated to the Piper Aztec; however, a Piper Apache club is dedicated to the Aztec’s older sibling. The club welcomes all Pa23 owners and may be found at the following website https://piperapacheclub.com/

Question: What was the Piper PA 23 Apache originally called?