The Cessna 340 series aircraft aimed to straddle a gap between the entry-level unpressurized twins, such as the Cessna 310, Twin Comanche, Beech Baron, Piper Aztec, and the larger, more expensive Cessna 414, Piper Aerostar, and the Beechcraft Duke. One of the first light twins to offer a pressurized cabin and a proper cabin-class interior accessed by air-stairs rather than climbing over the wing for entry, sales of the Cessna 340 soared when introduced in 1971.

Customers were impressed by an aircraft of that size with a pressurized cabin. Proving the most popular of the 340 series, 948 of the 1,287 Cessna 340s produced were the 340A model. 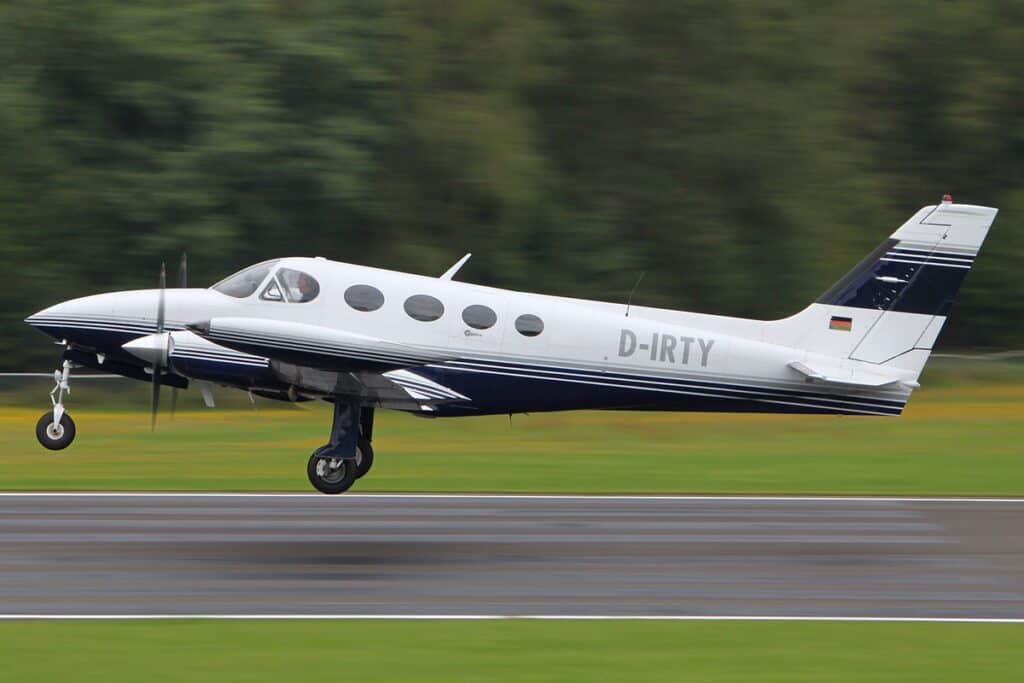 340A Performance and Handling

The 340A doesn’t have too many vices, and like most Cessna light twins, it’s pretty stable and comfortable to fly. The main complaints seem to be a reasonably involved fuel system involving six fuel tanks requiring a distinct methodology for use. However, most owners report that after a few hours of flying, it all becomes second nature.

The aircraft is also quite sleek, requiring some thought to slow down and come down without shock cooling the engines and incurring expensive repair bills. Getting the aircraft back to the 160-knot flap extension speed takes some thought, after which it gets easier to slow to the 140-knot gear extension limit. However, once flaps and gear are down, you drop to the other side of the lift/drag curve, requiring you to maintain power to stop high descent rates. You’ll need to maintain some of that power right down to the flare.

With a maximum altitude of 30,000 feet, owners report normally operating the aircraft from high tens of thousands to mid-twenty thousand feet, giving a decent cruise and fuel burn combination while staying nicely away from the smaller players below and the heavy iron above. With airspeed truing out between 190 and just over 200 knots at 65% power, fuel consumption sits around 30 gallons an hour. Push up to 75% power, and you can expect 200 to 215 knots at 32 to 34 gallons fuel burn per hour. 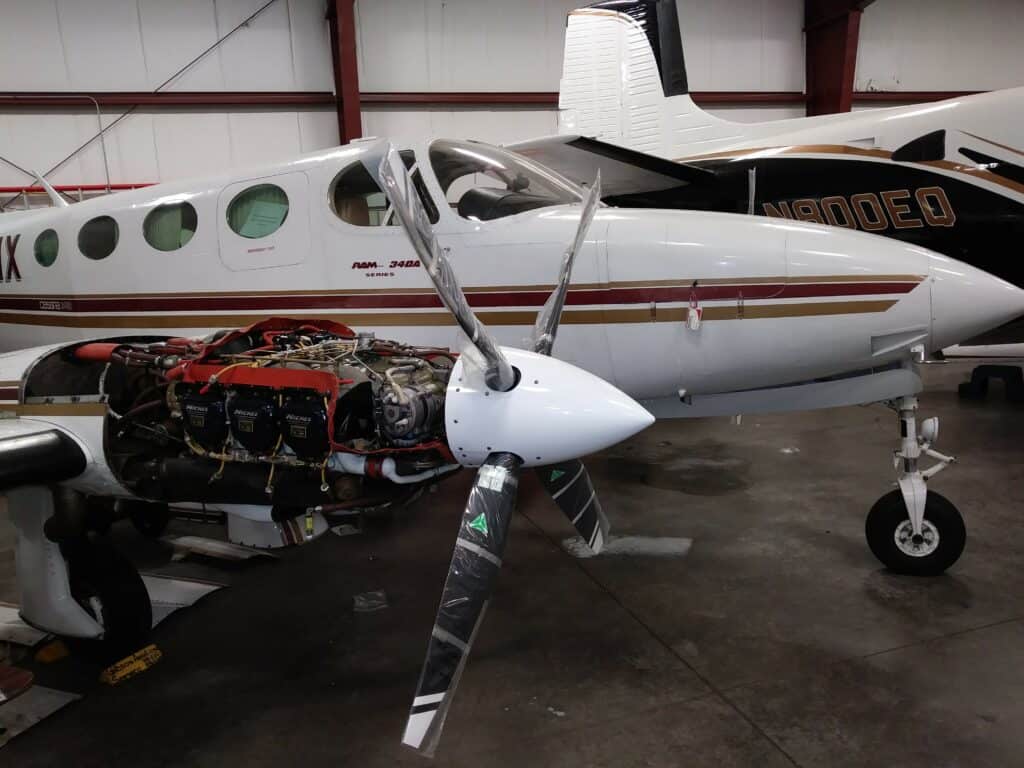 The Cessna 340 adheres to the standard Cessna maintenance schedule, with the most frequent inspection being the 100 Hour inspection.

However, Cessna has introduced a range of airworthiness directives and SIDs, known as Structural Inspection Documents, aimed at the worldwide fleet of aging Cessnas.

While not mandated in the US, some national airworthiness authorities are making compliance mandatory. This program requires extensive and expensive inspections at specified hours or cycles, severely affecting aircraft resale value as the aircraft ages. These SIDs affect the Cessna 340, and all prospective purchasers would be wise to establish whether compliance is required in their country before purchase.

340A Modifications and Upgrades

Riley Aviation was well known for its modifications, offering piston and turbine upgrades to the 340 and 340A. These may still be seen in second-hand aircraft for sale.

Notable airframe mods include Aircraft Performance Modifications (APM), which offers strakes under the rear fuselage close to the empennage. These re-energize and straighten airflow, which gives reduced fuel use and an increased cruise speed by 4 to 6 knots. More importantly, they reduce adverse yaw and stall speed while improving climb rates. There is also a spoiler STC that enables rapid descents without careful planning while preventing engine damage.

340A Where To Find Replacement Parts 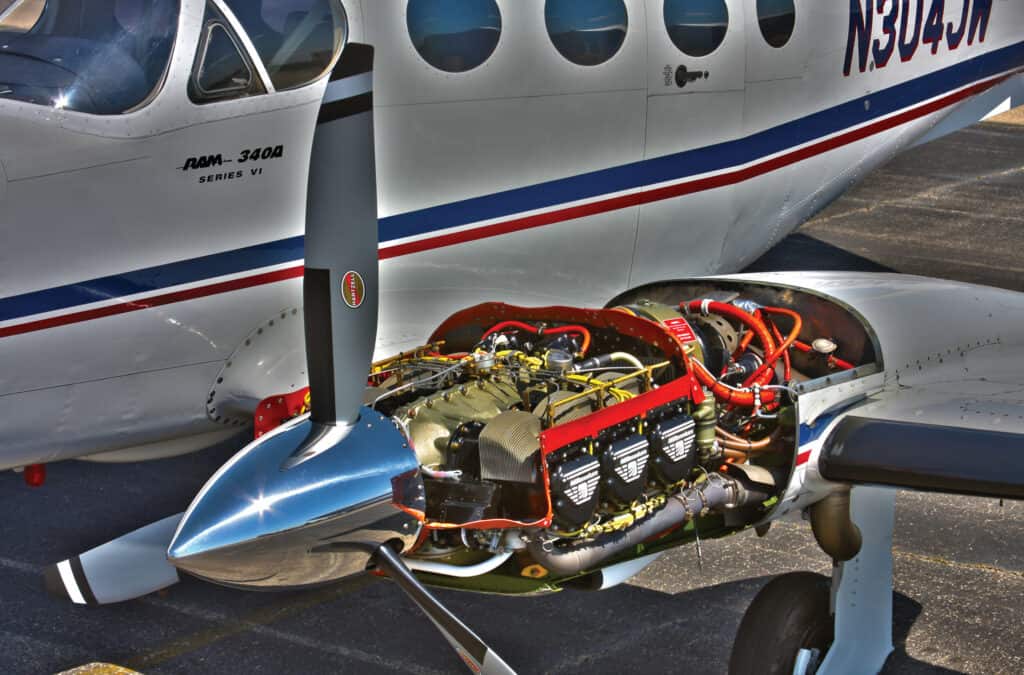 The Cessna 340 is one of the most successful light twins still flying, with almost 600 registered in the US alone, and it has become the world’s best-selling piston-powered, cabin-class pressurized twin.

Therefore, finding parts to support the aircraft is not difficult. Preferred Airparts, based in Ohio, provide worldwide customers with surplus new Cessna original components and used parts from dismantled aircraft.

With the rise in FAA-PMA approved manufacturers, many have niched down to support a particular aircraft type and finding trim (knots2u, Texas Aeroplastics or AvFab), landing gear components (Robair Repair), or lighting (Whelen Aerospace Technologies or AeroLeds) for your 340 is not hard. The more generic components such as filters, wheels, tires, and brakes are off the shelf and stocked by large aviation suppliers like Aircraft Spruce & Specialty or Wag Aero.

There are no real ‘gotchas’ with the 340; however, there are areas of which to be aware.

The Continental TSO-520s have a known history of crankcase cracking. While Continental did switch to heavier crankcases in the mid-1970s, cracks can still occur. Catastrophic failures are rare, but all repair shops are aware of this issue, with inspections carried out regularly to ensure integrity. On a well-maintained aircraft, the problem is usually easily spotted.

One well-known issue with several Cessna twins is exhaust cracking and failure. As a result, an airworthiness directive that includes the 340 was issued and mandates regular inspections, repair limits, and replacement requirements.

Owners may install a new rudder balance weight rib due to cracking of the original fit. If the aircraft has the old rib, it is subject to 100-hour inspections until the installation of the new rib. 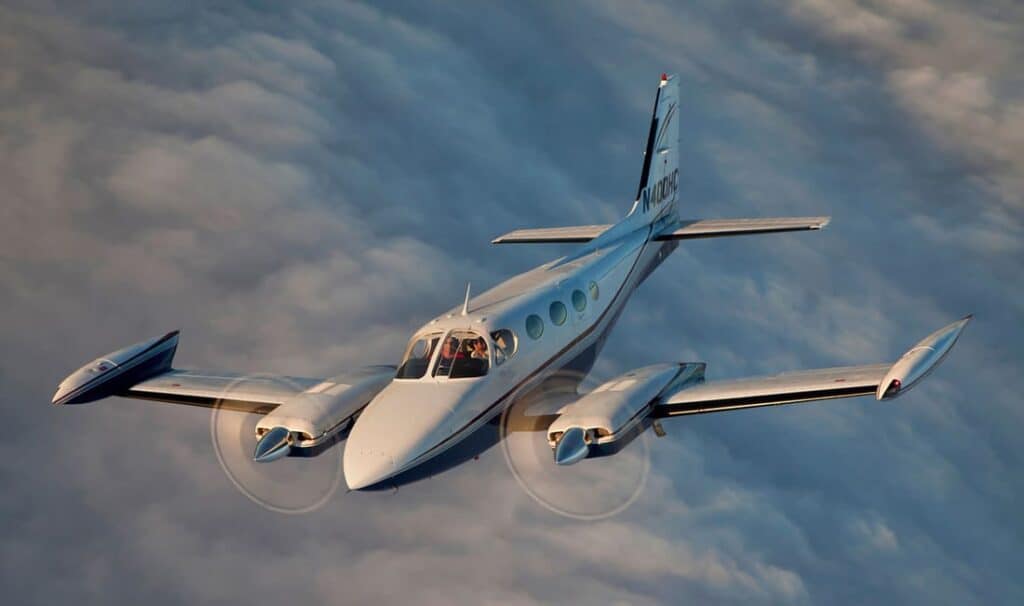 These seven items are all within the control of the owner. If an owner has taken a ‘maintenance only as required’ approach to their aircraft, they can expect that the lower resale value will more than recoup the money they might have saved. Those owners who try to operate their aircraft on a shoestring are pursuing false savings.

The Cessna 340 is a high-performance aircraft that requires regular and comprehensive maintenance, and if looked after and regularly updated, the aircraft will hold its own on resale.

As we saw earlier, current prices sit between US$115,000 to US$550,000. However, the 340A is a popular aircraft with considerable numbers worldwide, and unless some economic or aircraft supply-side variable changes, you can expect the 340A to command a reasonable resale price from someone needing a practical, reliable twin.

However, as aircraft age, they don’t get cheaper to own or operate, and the price will reflect that. The 340A does have a main wing spar service bulletin requiring considerable cost, yet that doesn’t occur until 15,000 hours, and with most 340As sitting around 4,000 to 6,000 hours, it will be another 30 years before this bulletin seriously impacts resale.

Of the owner reviews I have read, all love their Cessna 340A. Common themes are the higher maintenance costs and the fact that the aircraft is tail heavy when empty, so weight and balance need attention. No one feels these facts should prevent the purchase, only that prospective owners should be aware.

Many speak of wanting the spoiler mod, which is available as an STC. Given the need to carefully plan your descents, sometimes ATC doesn’t play ball and requires you to drop like a stone at a moment’s notice. The spoilers allow you to oblige without causing terminal damage to your engines. Others advise on the Ram Aircraft engine modifications to gain the extra useable weight and performance gains.

If you’re a larger-sized pilot and the right-hand front passenger is pretty big, getting into your seat can be a challenge, but once there, the room is plentiful. All state that their families love this aircraft.

Insurance costs are as previously described, with many owners required to do insurance-approved recurrency training on type each year to maintain acceptable premiums.

Most owners have owned their aircraft for 20-years or more and wouldn’t trade them. They describe the Cessna 340 as a stable and reliable IFR platform, which is relatively easy to fly.

Aircraft of similar configuration, age, and role include the Beechcraft Duke, Piper Pa-31 Navajo, and the Rockwell Aero Commander. All sell at similar prices, although the 340 does appear to hold its price well in comparison. Comparing performance, the Cessna 340 appears to have the edge in climb rate, cruise, and service ceiling.

Answer: TTAF stands for Total Time Airframe, which refers to the number of flying hours the airframe has accumulated since new one. It is an indication of age and use.

Question: What does Empennage mean?