In 1941, The United States Navy requested a twin-engined fighter to be built, complete with high firepower, long shooting range, and the ability to gain altitude quicker than any aircraft previously made. Grumman accepted the challenge of creating one and embarked on a long crafting journey.

Planned, designed, and built for the second World War as a convoy fighter or escort, the F7F was finished too late after it was designed in 1941 to fly with the Allies of the ’40s in World War II. It was instead used during the Korean War.

Two F7F squadrons had been in the midst of training when the war ceased, and the Japanese surrendered.

Its form was adapted and upgraded for specialized flying during the ensuing years, resulting in 4 versions with variants of each. In 1949 and later, Grumman F7F fighters were housed at the US Navy’s storage facility- Naval Air Station Litchfield Park in Arizona. This property is now the Phoenix Goodyear Airport in Maricopa County, Arizona.

Pratt and Whitney’s “Double Wasp” radial piston engine was first introduced to the Cat series in the F6F Hellcat carrier-borne fighter, which helped to gain air superiority back for the Allied Forces during World War II’s remaining air battles, and was the aircraft with the highest kill rate in the Pacific United States region.

The Double Wasp was placed as a twin-engine in the Tigercat, each engine hosting a horsepower rating of ,2,100. With 4,200 HP the Tigercat could fly 71 MPH faster than the previous Hellcat, making it the Navy’s new choice for carrier-borne fighting at a top speed of 460 MPH. 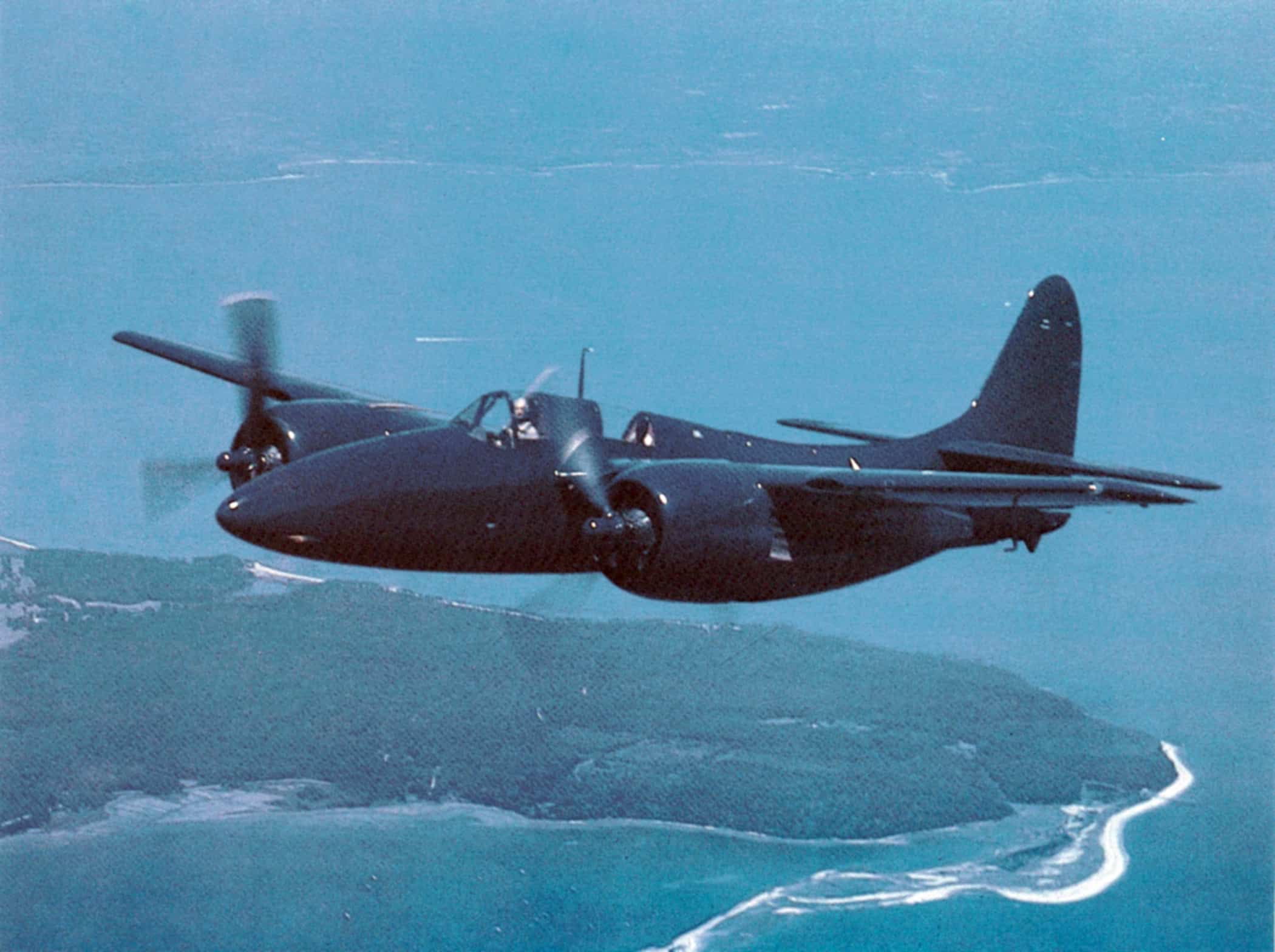 The original F7F design was made to hold four Browning M2 20-mm cannons (2 fitted to each side of wingroots),  and external underside wing area and fuselage underside hardpoints allowing two one-thousand-pound conventional drop-bombs for land attacks or one single torpedo for sea attacks.

This heavy convergence of weaponry, combined with the fighter’s 460 MPH top speed, greatly impeded its operation on US Navy carriers and marked its failure to be a carrier-borne fighter.

Later, Grumman was to add to this armament four 50-caliber Browning heavy machine guns fitted to the undersides of the fuselage, two on each side.

Rejection By the US Navy

Originally designed by the Grumman company (which was founded on December 6, 1929, by Leroy Grumman and co-founders- now merged with Northrop and renamed Northrop Grumman) as convoy fighter planes for the US Navy’s Midway-class and larger-sized carriers, these huge fighters failed all aircraft carrier take-off and landing tests because they were too fast in landing and heavily loaded with firepower for storing and operations, and too large for any smaller aircraft carriers.

They were given to the USMC (United States Marine Corps) instead for land-based fighting, and later versions were adapted to accommodate the US Navy carriers, who by then preferred Corsairs and Hellcats over them.

Ironically, when the adapted final variant passed inspection and was given to the Navy- the F7F 4N Tigercat, fitted with special naval upgrades- only 13 were made of them.

The Tigercat only saw combat once, in the Marine Corp Night Fighter Squadron VMF(N)-513 Flying Nightmares, shooting down two Polikarpov Po-2s in one mission.

Those North Korea biplanes were the only ones blasted out of the sky by the Flying Nightmares during the whole of the war, and no other squadron or fighter type experienced active combat.

Below is a true retrospective short film dating back to 1945, which briefly describes the Tigercat and its proposed duties.

The first produced prototype built before the official Grumman F7F Tigercat was the XF7F-1, adapted from the original XP-65, which was ignored, and the building terminated in favor of what would eventually be the F7F Tigercat. They only built two of these models. It was too undeveloped to be wanted by the US Navy as of yet.

These prototypes had oversized propellers that used more energy. They were later scaled down to promote engine cooling.

“Test” was written on the side of both planes, in yellow during the first test and orange upon the second, both being outlined with a black border.

03549 was damaged beyond repair during the test flight, but the pilot was uninjured, and all the testing of the 03550 was accomplished so successfully that the US Navy ordered 500 to be produced.

Unfortunately, this order was never fulfilled as the attack aircraft proved itself unusable for carriers until the final variant was designed and built.

Notable Specifications and Features of the XF7F-1 Prototype

The F7F-1 was the name of the first model; it would be permanently called the Tigercat. Originally it was to be called the “Tomcat,” but this name was rejected, and “Tigercat” was then submitted. The name was deemed fitting and seemed more virtuous. Later, though, the 1970s model was called the Grumman F 14 Tomcat.

The Tigercat’s nickname was “T-Cat,” and Captain Fred Trapnell claimed it as his personal favorite fighter plane.

This version is much larger in size than the XF7F-1 prototype and was upgraded in most, if not all, aspects of the design. 34 of this version were built. It was the initial fighter-bomber production model. 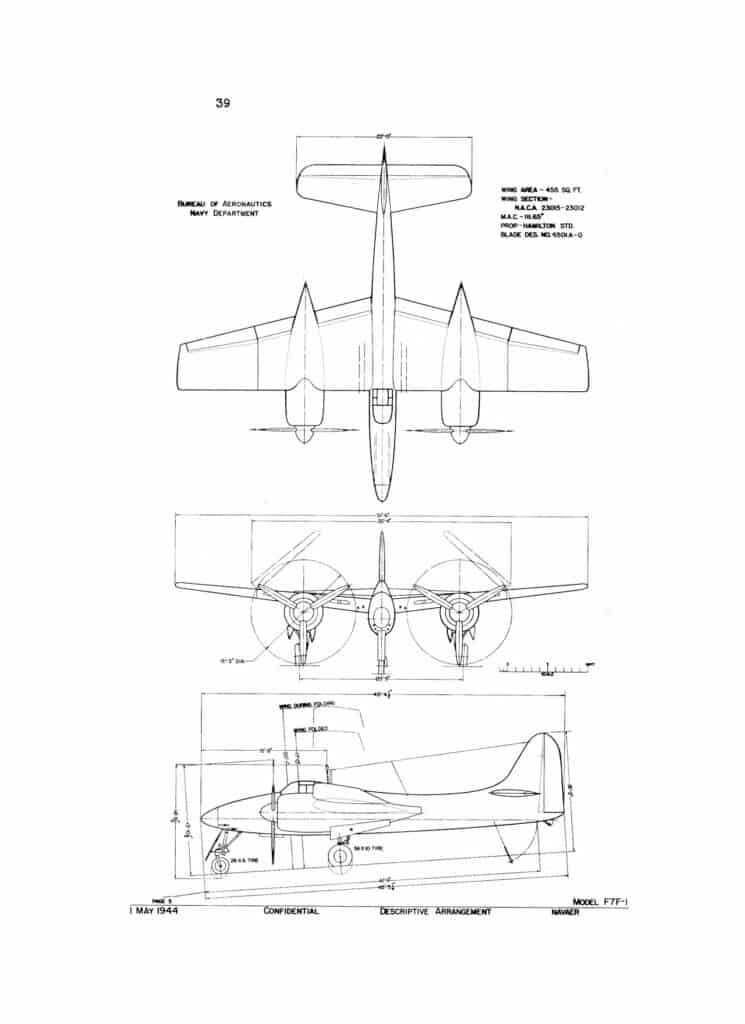 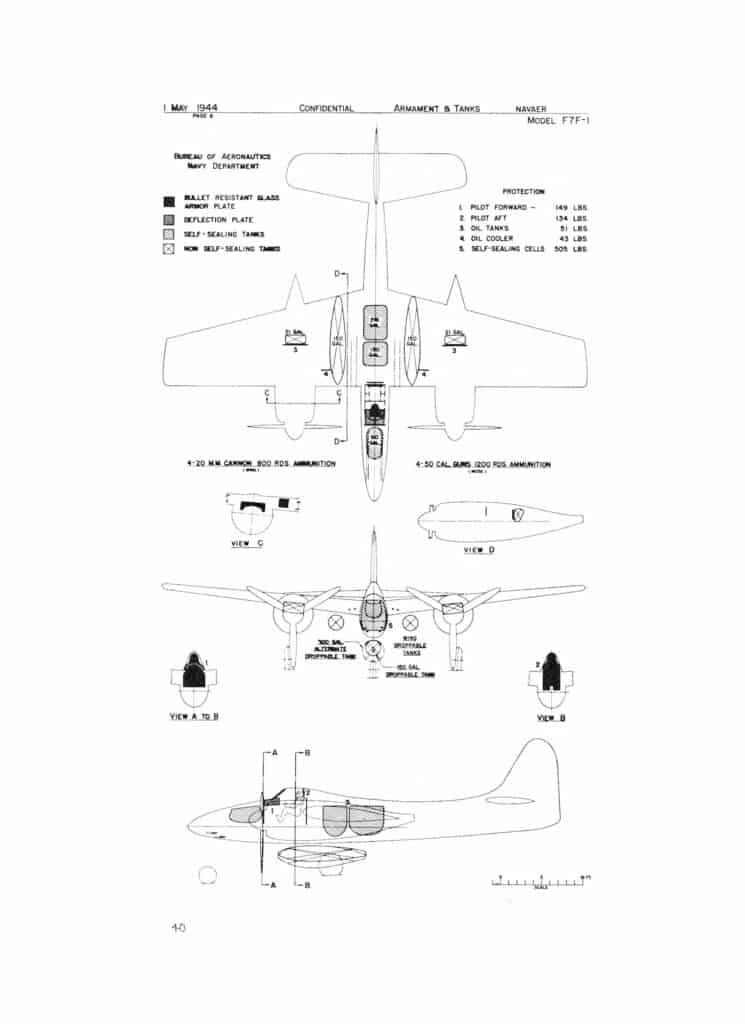 Standard Specifications and Features of the F7F-1 Tigercat

This variant of the F7F-1 version was crafted to be a night-fighter type.

Of this night-fighter prototype, only one was formed, as it was an example.

This one was the first model to be built with two seats. 65 units were built from the design. Based upon the former prototype model.

Differences from the XF7F-2N Tigercat

Actually not a true variant, the F7F-2D was converted from several F7F-2Ns to drone-control airplanes. Equipped with a windshield from the F8F Bearcat, each one was made with borrowed designs and parts from other Grumman planes and made into its own kind of aircraft.

This variant was deeply modernized from the F7F-1, but its only visual differences lay in the tail section being larger than its predecessors (thus promoting better balance and stability for flying) and its enlarged fuel tanks.

Its climb rate and acceleration speed were also increased in this variant and were upgraded to be able to hold three unguided rockets- including Tiny Tims. An excellent craft for diving, hitting, and running. 189 of this variant were built- the most produced of any one variant.

Standard Specifications and Features of the F7F-3 Tigercat

Like the F7F-2N, this is a two-seater fighter, a variant of the F7F-3 made to be a night-fighter with room for a second pilot generally used as a radar operator. Also, its nose was lengthened to accommodate its radar system. 60 were crafted of this design. 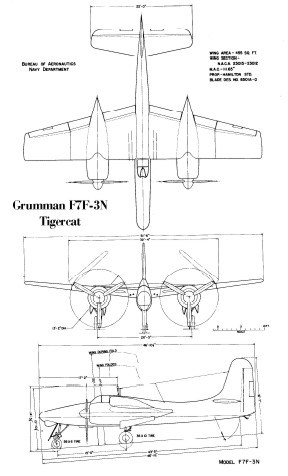 The above diagram is in the public domain and uncopyrighted.

Differences from the F7F-3 Tigercat

Some of the 3Es were made from a few F7F-3s to form electronic-warfare airplanes.

The F7F-3P was converted from a number of F7F-3Es to become photo-reconnaissance planes.

This, the F7F-4N, was the final version and variant of the F7F “Cat” family. It was equipped with many Naval upgrades, especially for the US Navy (including a tailhook designed to grasp onto the holding lines stretched across the deck of carriers), and was finally accepted by them but was produced too late to take part in active combat for the Allied Forces during the Second World War. Only 13 were built of the version.

Here is another short video showing a beautiful airshow of two restored F7F Tigercats, each demonstrating its wonderful ability to fly and land. Notice how smoothly each plane touches the runway due to the ingenious tricycle landing gear!

Question: Where Can I See an F7F Tigercat?

Answer: Several F7F Tigercats are currently restored, and five are airworthy and on public display.

The F7F-3 model numbers 80374 and 80375 are housed at the National Museum of World War II Aviation in Colorado Springs, Colorado, and are available to be seen there. Still airworthy, you can probably see them in flight during one of the museum’s airshows.

Two F7F-3Ps reside as airworthy fighters at the Lewis Air Legends in San Antonio, Texas. Its events and tours are discontinued at the time of writing this article, but you can see its current status here on Facebook.

The 80411 model F7F-3 is airworthy and kept at the Palm Springs Air Museum in Palm Springs, CA. You can even watch the museum’s live camera on Youtube!

Two F7Fs are unflyable, but on display for public viewing.

One is at the Planes of Fame Air Museum in Chino California as an unrestored display and can be seen there. Its model number is 80382 and is an F7F-3.

The other unflyable F7F is stored on the property of Tucson, Arizona’s Pima Air and Space Museum, and is in the form of an F7F-3, numbered 80410. It can be viewed at the museum’s outdoor exhibit.

The other Tigercats are owned privately, on personel-only military bases, or in storage.

Question: How Could the Tigercat Have Helped Had it Been Used in WW II?

Answer: Being undeveloped, it had not reached its peak of performance during WW II, but had it completed its training as a number of fighters in a squadron (as it was endeavouring to complete when the Japanese surrendered) I believe it could have done great service as both a night and day-fighter- escorting, dive-bombing, and serving in various other roles.

Question: Can I Purchase an F7F Tigercat?

Answer: No F7Fs are currently for sale, and you cannot purchase one unless you personally know one of the private owners.

Question: What is the Top Speed a Tigercat Can Reach?

Conclusion – F7F Tigercats After the War

After its short combat experience in the Korean War, some F7Fs were bought and used as fire-fighting tanker planes. Fitted with water and borate bombs to drop upon wildfires, it was nicknamed the “Borate Bomber.”

Its mighty engines and large weight capacity made it easy to hold a heavy borate/water tank under the fuselage, and it served in this role until the latter 1960s.

Its legacy continues today as it lives on in several privately and museum-owned F7F-3s as a display model and a joy to its owners. Someday it’s my dream to see one of these fantastic flyers in person and re-live my satisfaction in discovering them and writing down their history. 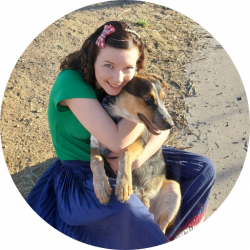 Brieanna Savard
An adventurer at heart, Brieanna is a girl in her twenties who loves to read and write about all things aviation. Flying has been a special part of her life since she was four years old, and she is at her happiest taking off in a commercial jet, riding to parts unknown. One day, it is her dream to fly a little plane herself- at least as a co-pilot. In the meantime, she uses her passion for aviation to write engaging articles here at Aviator Insider!