In the 1950s, the US Navy was seeking a replacement for their piston-powered Douglas AD Skyraider. They set clear expectations of a carrier-capable, jet-powered light-attack aircraft. Required parameters were a top speed not less than 500mph, a combat radius of 345 miles with a 2000 lb weapons load, and a maximum takeoff weight of 30,000 lbs. Given the severe budget restrictions when the Korean war was ending, a maximum cost per aircraft of US$1,000,000 was stipulated. 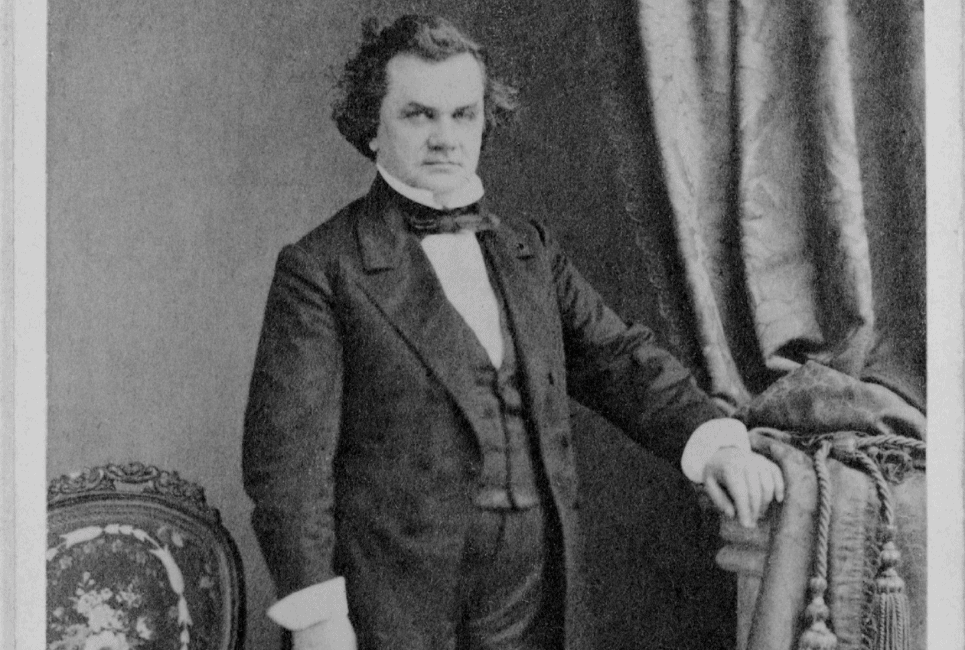 Designer Ed Heinemann at the Douglas Aircraft Company had been responsible for the Skyraider design in 1944. In the 1950s, he found himself again designing for the Navy to supersede his older, very successful attack aircraft. While designing the Skyraider in the 1940s, Heinemann had read a study that showed for every 100 lb weight reduction, takeoff run decreased 8 ft, combat radius increased 22 miles, and climb-rate increased by 18 ft/min. He and his designers then managed to take 1,800 pounds out of the Skyraider prototype. That knowledge and success stayed with him when he began work on the new jet-powered design.

The team’s new design was half the weight of the maximum required by the Navy, thanks to Ed’s well-considered design. Using a small delta wing, Heinemann avoided the requirement to fold the wings for carrier operations, saving 200 pounds. The aft fuselage was separable from the forward fuselage and wing, allowing extensive engine access to crews for maintenance and replacement. This design alone removed the need for the weight penalty from access panels and latches. The third clever design trick avoided retracting the undercarriage up into the wing spar structure. Such a design would have required considerable strengthening of the wing, with attendant weight penalties. Instead, only the main wheels entered the wing while housing the legs and actuators in nacelles external to the wing lower skin. The fuel tank design was similarly intelligent and compact, with a fuselage tank and a wing tank of 240 and 520 gallons, respectively. The arrangement was such that the design saved considerable weight in piping and valves.

The engine planned for the new aircraft was one produced by Curtiss-Wright under license from Armstrong Siddeley. The initial engine chosen was the Wright J65-W-2 producing 7,200 lb of thrust; however, pre-production and first production aircraft shipped with the J65-W-4 and 4B, providing 7,800 lbs of thrust.

Such was the success of Heinemann’s design strategy, the first 500 aircraft were to ship for US$860,000 each, 14% lower than the Navy’s target price.

In June 1952, the Navy placed an order with Douglas Aircraft Company for 20 aircraft designated A4D-1. 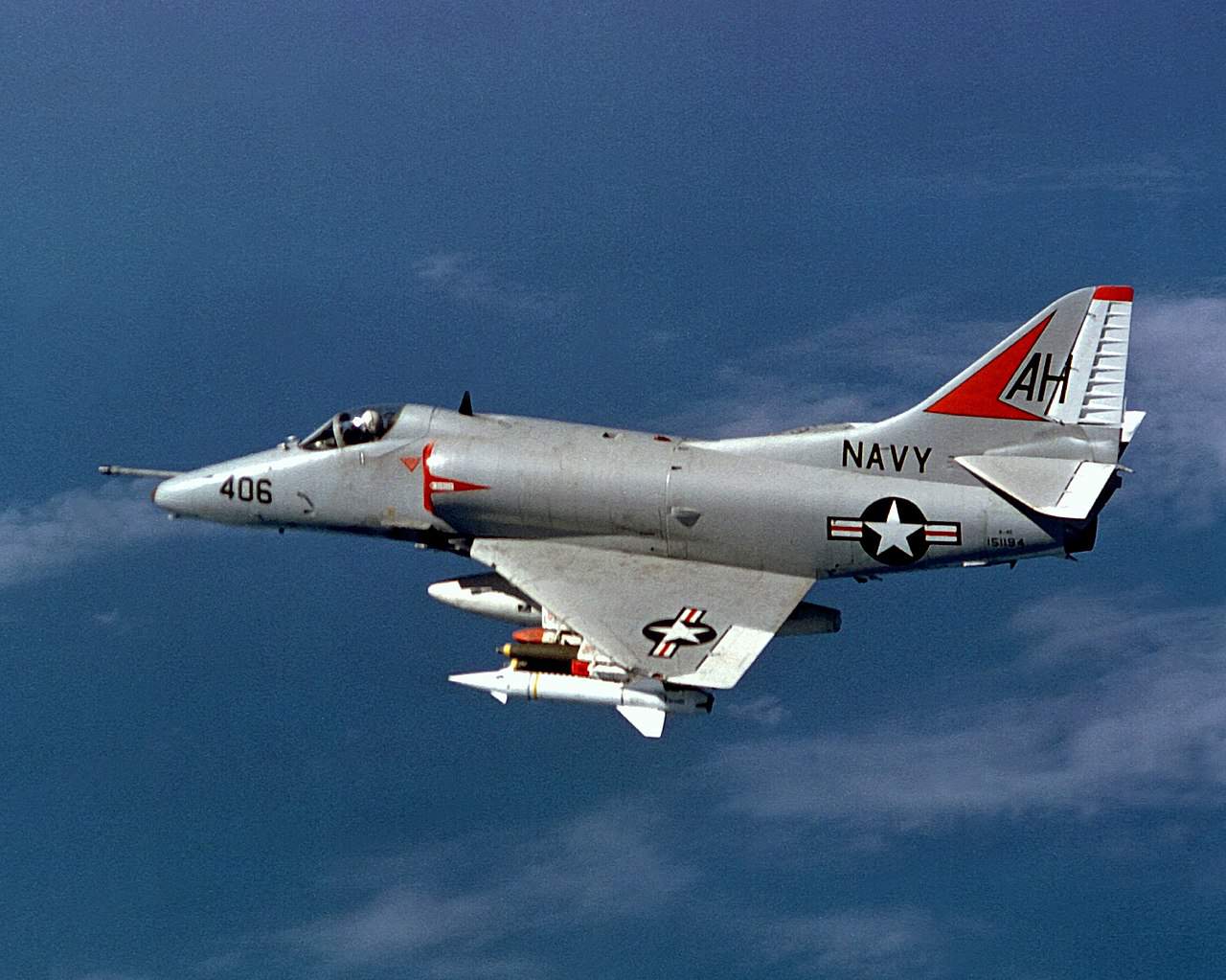 The design proved a great success. The first 19 pre-production aircraft flew in August 1954, with only minor design issues to rectify. Production began for 165 A4D-1 (later designated A-4A) aircraft. At the same time, the design was declared operational in September 1955, preliminary carrier trials started in October of that year, and deliveries to the fleet began in September 1956. The production run for the A-4A finished in 1957.

The A-4B model entered service in 1957, with several improvements to the original design, notably dual hydraulics, the addition of the air-to-air refueling probe, powered flight controls, and the newer J65-W-16A engine with 7,700 lbs thrust. The engine was later revised to the J65-W-18 at 8,500 lbs thrust. Douglas produced 542 of this model.

Deliveries of the A-4C began in 1960. This model incorporated some significant avionics changes, equipped as it was with a low-altitude bombing system, terrain-following radar, an automatic flight control system, and all-attitude reference. The aircraft was now all-weather capable and shipped with an improved ejector seat. This model was produced in the greatest numbers of all Skyhawk, with 638 constructed. By February 1961, Skyhawk deliveries had hit 1,000, and production of the A-4C model ceased in 1962.

As the A-4C was reaching the end of its run, plans were afoot to find a new engine for subsequent models. The Wright engine was old single spool technology, and no further design growth was likely or made financial sense. Douglas selected the Pratt & Whitney J52-P-6 as the successor to the Wright, offering a twin-spool technology giving greater fuel and operating efficiency while providing scalability in design and power.

The new model Skyhawk designated the A-4E first flew July 1961 and entered service in November 1962. Fitted with the new J52, the latest series incorporated airframe strengthening to support an additional two pylons and a further upgrade to the avionics package and ejection system. This model was optimized for ground attack and conventional bombing roles, gaining a greater combat radius from the fuel efficiency of the J52. Production of the A-4E ceased in 1966, having constructed 499 aircraft.

The last single-seat model, the A-4F, was fitted with the more powerful J52-P-8A producing 9,300 lbs thrust. One hundred forty-six of this model were produced, with the first flight in late 1966. Once again, an avionics upgrade took place, armor was added, a zero-zero ejection seat fitted, and wing spoilers were added for improved landing performance. A further engine change occurred to most of the -F Skyhawk, with the more powerful J52-P-401 retrofitted.

Many variants and models of the Skyhawk exist worldwide, yet all are variations on the A through F core model series. The one distinct variant worth mentioning is the two-seat trainer initially based on the A-4E model, although carrying some of the A-4F features. In 1964, the Navy ordered a training version of the Skyhawk, with the first flight occurring in 1965. Douglas added a longer cockpit via a 28-inch extension of the -E fuselage accompanied by a reduction in fuel capacity. The -F model’s features included the J52-P-8A engine, the zero-zero ejection seat, spoilers, and nosewheel steering. With 241 two-seaters constructed, the model designation was the TA-4F.

By the time production of the Skyhawk ceased in 1979, Douglas had built 2,960 aircraft. 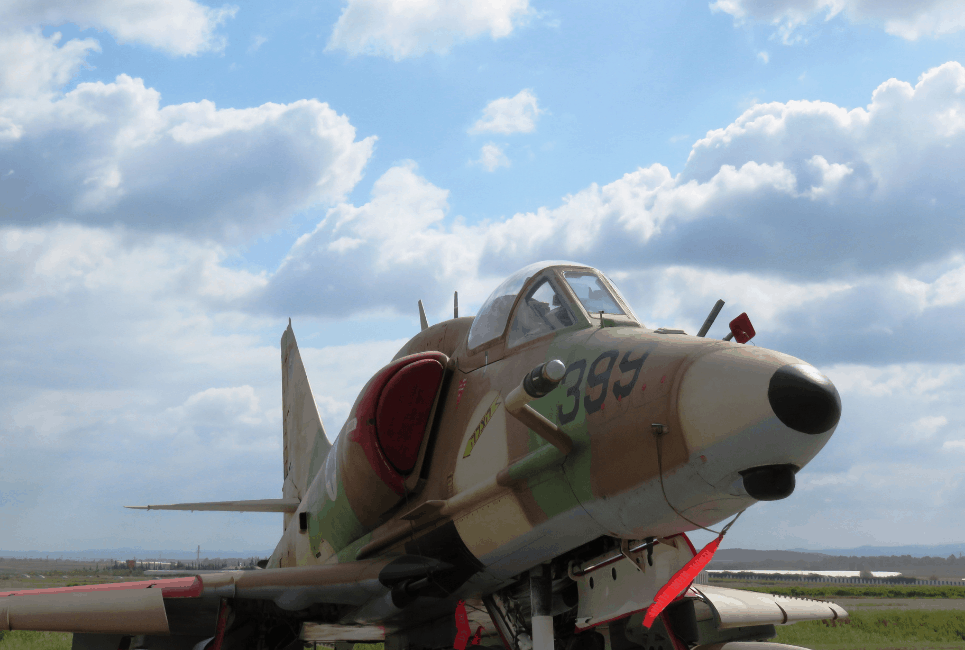 The Skyhawk has been proven in combat by Argentina, Israel, Kuwait, and the US.

Israel purchased a total of 263 Skyhawk aircraft. The Skyhawk was the first US-supplied aircraft destined for Israel, with Israel having purchased previously from France. From the late 1960s through the 1970s, the Skyhawk was Israel’s primary light ground-attack aircraft, taking part in the Yom Kippur War, the War Of Attrition, and the Lebanon War. In 2008, Israel began phasing the Skyhawk out in favor of more modern aircraft, selling some of their fleet to Indonesia. Aircraft were retained for training purposes, although finally wholly retired from service in 2015.

Used by Kuwait during the Iraqi invasion in 1991, 29 aircraft attacked the advancing Iraqi forces. As the Iraqi’s gained a foothold and overran bases, the aircraft were operated off roads in the desert until 24 finally escaped to Saudi Arabia and continued operations there. Twenty-three aircraft survived the conflict and were sold to Brazil before being decommissioned in 2017.

Argentina became the first foreign purchaser of the Skyhawk when it began procuring the aircraft in 1965 through to the late 1970s. The US Carter administration imposed an arms embargo on Argentina when the Skyhawks were used in the right-wing state-sponsored anti-communist terror campaign against Argentinians between 1976 and 1983, and again in the undeclared war with Britain over the Falkland Islands in 1982. By this time, Argentina had purchased one hundred and thirty aircraft. In 1994, the US entered an agreement with Argentina to modernize 36 of their remaining Skyhawks. These modernized versions are now used to intercept smugglers and drug-trafficking aircraft.

The US’s primary use of the Skyhawk was in Vietnam as the leading light attack aircraft. One of the first aircraft to carry out airstrikes, and one of the last to drop bombs in Vietnam, 362 aircraft were lost during the conflict. 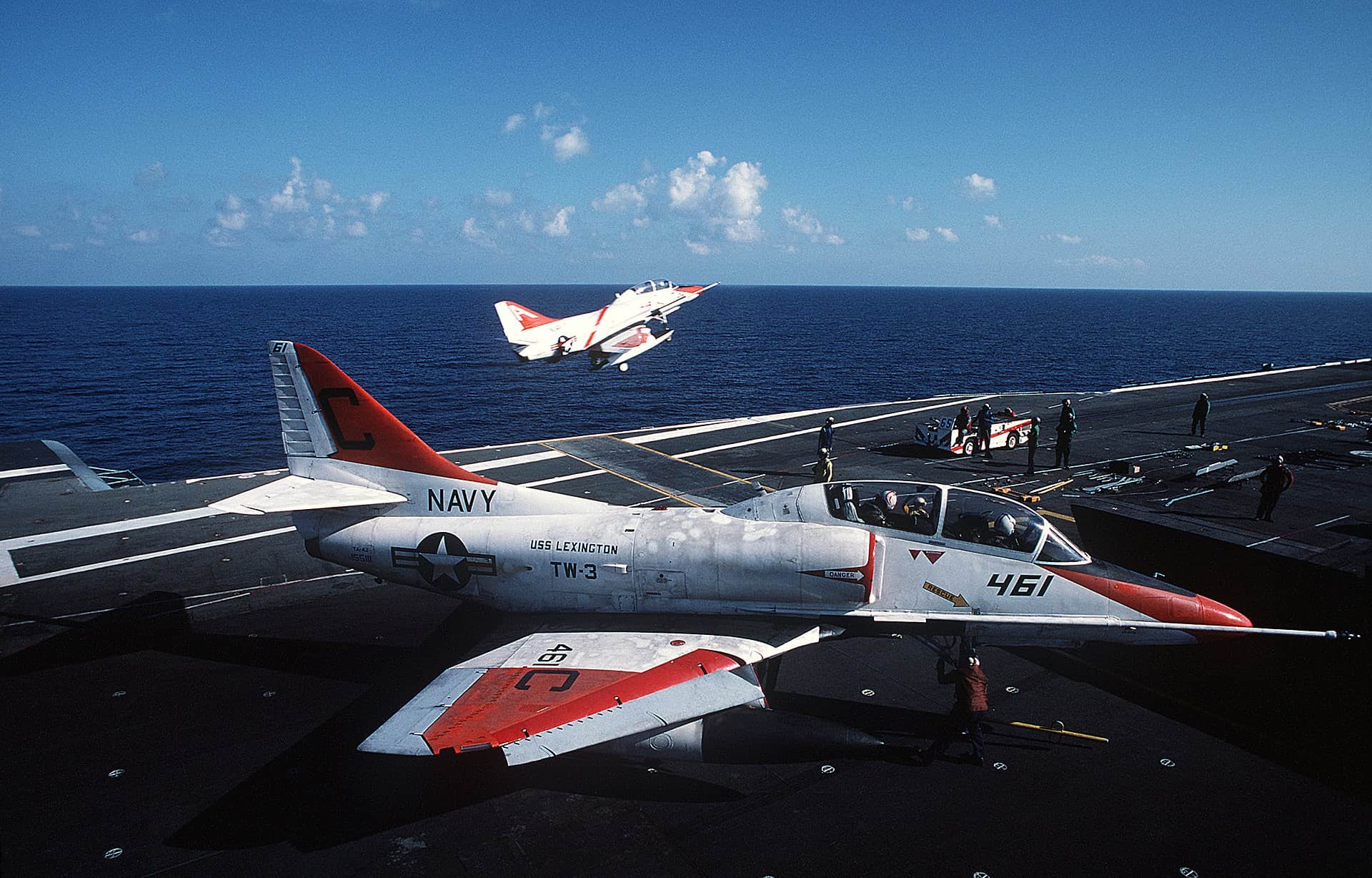 Although the Skyhawk continues to fly today, its capabilities have been well-surpassed by today’s well-equipped, advanced, multi-role fighters. Many are now in private hands and sell for prices between US$1 million and US$1.5 million.

In continuous production for 26-years, the Skyhawk was certainly an aircraft for its time. The aircraft was highly maneuverable, with a roll rate of 300 degrees per second at moderate speeds. In combat, the high pilot survival rate was due to self-sealing fuel tanks, armor-plate behind, beneath, and in front of the cockpit, manual control reversion, and a three-wing spar. Providing a low capital cost, a low operating cost, and ease of maintenance, the Skyhawk was light, strong, agile, and greatly loved by the pilots who flew them.

Kudos to Douglas Aircraft Company, Ed Heinemann, and his team for producing a quite extraordinary little fighter.

Question: What does dynamic ceiling mean?

Answer: This is the height limit able to be met using full power and aircraft momentum to climb. It does not support sustained operations.

Question: To what does MACH refer?

Question: What is an aircraft’s angle of attack?

Answer: Angle of attack refers to the angle between a reference line on an aircraft, usually the chord of a wing, and the angle at which it meets the relative airflow. There is a maximum angle at which an airfoil will stall or cease to produce sufficient lift.

Question: Can you explain ‘thrust-to-weight-ratio’?

Answer: A ratio that describes the amount of thrust available, compared to the weight of the aircraft. Higher thrust to weight ratios make the aircraft accelerate and climb faster.

Answer: Wing loading is the total aircraft mass divided by its wing area. Faster aircraft generally have a higher wing loading as less area is required to carry the same mass. However, it takes a longer distance high wing loading aircraft to takeoff and land.

Question: What is a zero-zero ejection seat?

Answer: A zero-zero ejection seat refers to an ejection seat’s ability to be used by the pilot when the aircraft is not moving forward and is at ground level. Some ejection seats require forward motion or a minimum altitude to assure safe ejection.

Question:  What are hardpoints on an aircraft?

Answer: A hardpoint is a location on an aircraft designed to carry external or internal loads, such as fuel tanks, weapons, or storage containers.