General aviation is still going strong in 2022, and the Mooney M20c is no exception. With exceptional capabilities in range and better engine cooling, the M20c model is one of the many Mooneys that are still being flown today.

Taking a look at a guide and reviewing specs is important when it comes to considering the Mooney M20c. Since there are so many aircraft out on the market, comparing specs will ensure that you consider all of the information provided about certain aircraft.

As a general aviation fan favorite, the Mooney is a model of aircraft that is easy to find and reliable, all while being easy to maintain with access to parts and tools. The M20c is a short 4 seater aircraft that has fans boasting about its speed and reliability.

The Mooney M20c model was recently released after its predecessor, the M20b, with a range of improvements. These improvements were designed to aid the general aviation pilot and included better deflection of the controls, a new battery access door, a powerful landing light, and an upgraded floor.

These improvements also made the aircraft more efficient. With better instruments and improvements on the fuselage, the M20c is able to fly a further distance with less fuel burn. 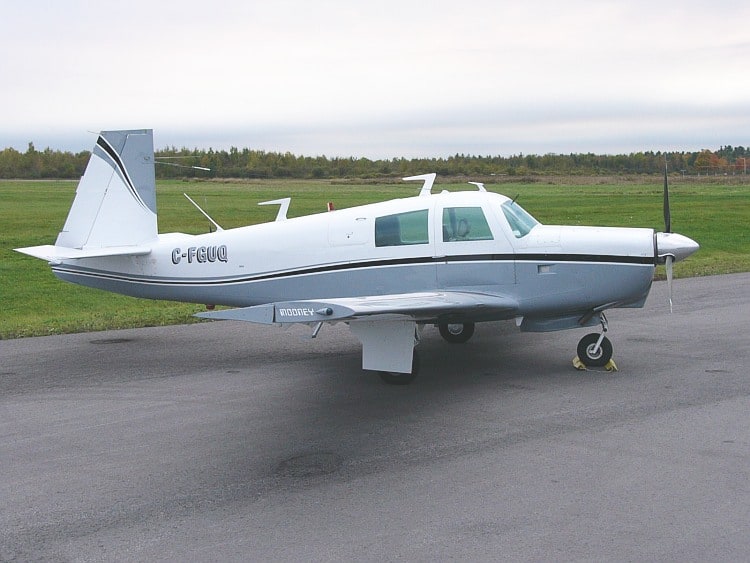 Although there are many Mooney’s out in the world, many of their owners are so in love they are unlikely to part with them. As a result, an M20c tends to be more on the pricier side, and the inflation prices in 2021 do not help.

At the moment, you can purchase an older M20c for 40,000$-60,000$ USD, depending on the time on the airframe and engine. An airplane with more engine time will sell for less, but it will require an expensive overhaul sooner.

It’s also often more beneficial to pay a bit more money for an aircraft that is in better condition. While some people have a hobby of rebuilding and restoring aircraft, it can be much more costly as the cost of maintenance must be included with the price of the parts.

A younger model M20c will be even more costly and can cost up to 90,000$USD depending on the time on the airframe and the avionics systems that are installed.

Many Mooney owners choose this aircraft based on its capabilities. The M20c has a powerful Lycoming engine that can range from 180-200hp, which, combined with the shorter body, results in an exponential increase in speed, ranging from a cruise speed of 150 to 170 kts.

This powerful amount of speed means the Mooney can travel long distances in a short amount of time. The M20c can travel up to 650 miles on its average fuel consumption and can push an additional 9 miles when being flown economically.

The M20c will consume its fuel at a healthy pace. The short body and lightweight mean that the M20c won’t over consume gas and will average about 12.4 gallons of fuel burned per hour, allowing more range.

As general aviation aircraft that are flying privately only require an annual inspection, there are quite a few items or airworthiness directives on the Mooney M20c that would require your attention.

Airworthiness directives are found on the FAA website and must be complied with by a certain date. These directives can be extremely costly or on the cheaper side, depending on the condition of the M20c.

Most Mooneys are well maintained and are strong aircraft, with little issues when things break. Nonetheless, be prepared to complete the propeller, engine, magnetos, fuel pumps, and battery maintenance. Because they are not Mooney exclusive parts, they tend to go more quickly.

Be sure to check spinners and props for cracks and scrapes. They are expensive to replace but, when caught early, can be a simple fix. Engine baffles are also common to break, so be sure to keep an eye on them as well. 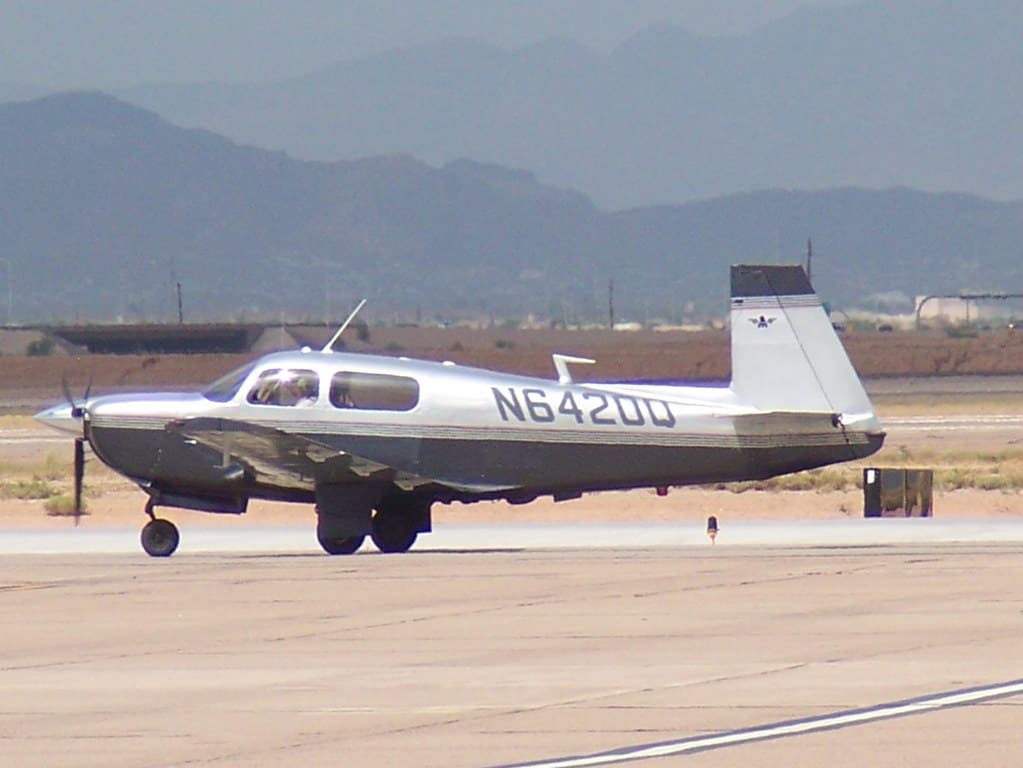 The M20c has many supplemental type certificates, also known as STCs. These STCs allow modifications to be made to the aircraft for better performance.

Many flap modifications are available to the M20c. These modifications focus on streamlining the wings to approve airflow and improve speed and fuel consumption. Speed increases can range from 0.5 to 1.0 mph and can cost anywhere from 50$ to 500$.

Because the M20c has a dual windshield system, there is an upgrade for a single window. The upgrade improves soundproofing and visibility, improving the comfort of the pilot in the cockpit.

Of course, many people enjoy more power in their aircraft. There is a modification where you can upgrade to a 200 hp Lycoming engine if your M20c is not already equipped with it. This conversion can be costly as it replaces the entire engine of the aircraft, but the benefits of having the additional power are significant.

M20c/ Where to Find Replacement Parts

As Mooneys have grown in popularity over the years, their parts have become more widely available. You can purchase new, secondhand, or even salvaged parts from different websites or aircraft owners.

By checking the Mooney online forums and clubs, you will easily be able to find those who sell parts or those who can recommend a place to buy said parts. You can also purchase new from online service stores or through your mechanic.

It is important to keep in mind that while secondhand parts can be cheaper than buying new, these parts need to meet a certain level of airworthiness before they can be installed in the aircraft.

Parts also have a shelf life based on hours the aircraft has flown, so buying a used part may be cheaper but will have to be replaced sooner than if it were new even if it is in good condition. 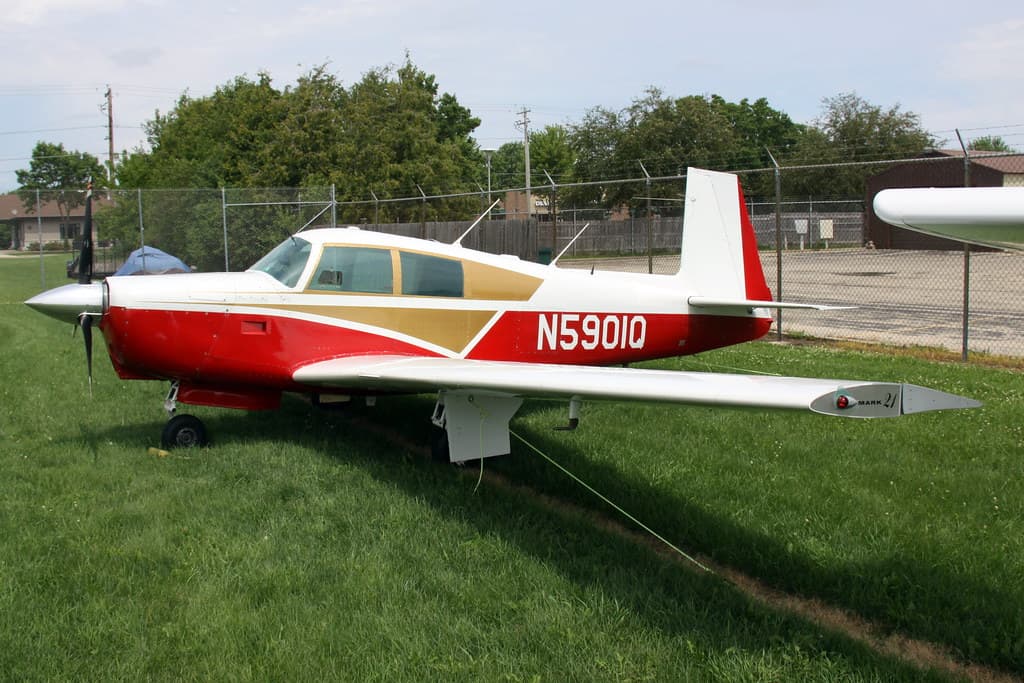 Luckily the M20c is a design that doesn’t have any issues with itself other than your usual wear and tear. If there is an issue with a part, more often than not, it has been manufactured by another company.

The M20c was designed for better cooling, but it is good to keep track of the engine temperatures. Due to its low wing and higher speeds, it’s also easy to overspeed the aircraft’s flaps or be taken by surprise by its quick handling.

One issue that can be found in an M20c that was not well looked after is the possibility of fuel leaks in the wing tanks. Resealing the wing tanks solves this issue and should prevent any further leaks.

Insurance is based on several factors, such as pilot experience and aircraft type. Liability coverage is the basic insurance covering only the pilot and is mandatory. Meanwhile, hull coverage, and not in motion hull coverage, are chosen by the one insuring.

Because of their age and stability, an experienced pilot with many hours can become insured on an M20c for as little as 600$ on an annual premium, depending on the insurance company.

A less experienced pilot who hasn’t owned an aircraft before can expect much more, sometimes with premiums of up to 1200$.

Luckily the Mooneys popularity does not decrease over time. Once reaching a certain age, aircraft maintain their value, so the M20c is guaranteed to give you a return of at least 30,000$ when you decide to sell.

By maintaining the aircraft and including upgrades, and having a low engine time by completing an overhaul, the M20c can sell for the same price that you bought it. This makes purchasing an aircraft like the M20c very appealing for building flight hours, as you will get back the money you’ve put into the aircraft.

Mooney is already a well-received name throughout the pilot community, and any of the M20 models are no exception. They are known for their speed and durability, and owners often talk about how they fell in love at first sight.

The M20c also has an icon, and a Mooney can be recognized even by those who aren’t as interested in general aviation aircraft. Because of this, the M20 series has a very large fan following of both pilots and non-aviators.

Although there are many M20cs still being flown today, they are becoming increasingly hard to come by as those who own them do not want to part with them. Their excellent stability and all-metal surface make them a favorite that many struggle to part with. 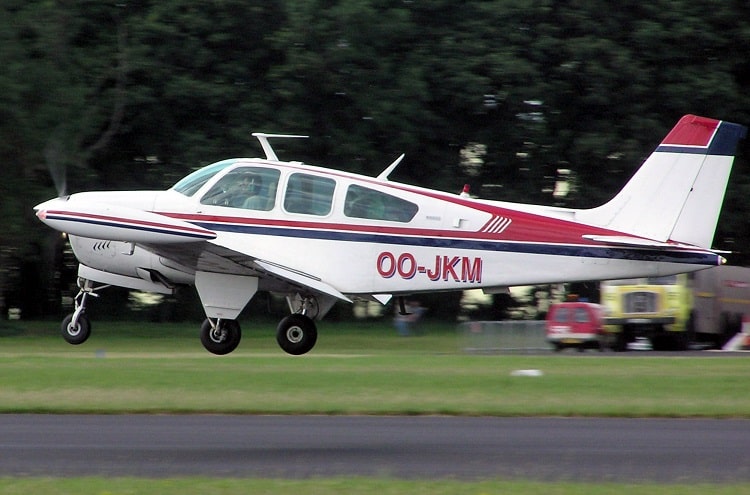 If you are looking for an M20c and can’t find one, then there are a couple of options available to you in terms of other aircraft.

Of course, you can stick with the name Mooney. The model M20e boasts all the same characteristics as the M20c. However, it comes already installed with the 200 hp Lycoming engine. It was known as the “Super 21” model and once again rose the popularity of Mooneys.

Another option would be the ever-well-known Beechcraft Bonanza. The earlier models of the Bonanza carry a similar amount of power and fuel burn as the M20c. Also falling in the same price range, or sometimes a little less, you can easily find one of the many Bonanzas around today at an affordable price point.

M20c/ Clubs You can Join

Do not hesitate to join the largest Mooney club at www.mooneyspace.com, where you’ll find several forums and resources that will aid you in the Mooney ownership journey. Owners will share anything from checklists to maintenance advice and is a valuable resource for new Mooney proprietors.

There is also the Mooney Pilots Facebook group, a free club to join that provides a space for Mooney owners from all over the world to converse and share photos of their pride and joy.

Question: What is the Mooney M20c Service Ceiling?

Answer: The service ceiling for the Mooney M20c is 17,200 feet. Of course, this attitude would not be what you used regularly. When flying over 10,000 feet, you need to have oxygen on board and wearing a mask that provides you a steady supply of oxygen throughout the time spent at that height.

Question: Why is the Mooney M20c so Fast?

Answer: The Mooney was designed with speed in mind. Because of this, great care is put into the M20cs aerodynamics, allowing the air to pass over the aircraft more easily.
This lets the aircraft fly much quicker through the air and burn less fuel, increasing its speed and distance. The M20c is also made to be quite light, with a shorter cabin, and the lack of weight allows it to fly more quickly.

Question: How Many Passengers Fit in the Mooney M20c?

Answer: The M20c can comfortably fit 4 people, including the pilot. Children under the age of 2 should be held for the duration of the flight for the most amount of safety. Weight restrictions might create a scenario where you can not take 4 people and baggage, so either a person or some bags will need to be left behind or taken on a different flight.

Question: The M20c is an Older Airplane; is it Safe?

Answer: Aircraft go through regular maintenance; every part is inspected for damage and replaced when it expired. This way, older aircraft are well maintained and are still airworthy to this day.
General aviation aircraft also have to go through an annual inspection. Every year the aircraft will be completely disassembled for this inspection as a certified mechanic examines every part of the aircraft.

Eden Quail
Eden is an ATPL pilot from Montreal, Canada. He flies corporate and regional, along with small aircraft of his own. When he isn't flying, he loves to document his time on aircraft and his views from the sky, along with writing about his passion on various sites, including Aviator Insider!