According to Piper, the M350 is the only pressurized aircraft in its class. The M350 was debuted in 2015 when Piper released the new M-Class aircraft based on the former PA-46 Malibu family. The Piper M350 is an improved version of the Malibu Mirage, with the same wings but new avionics, electronic stability protection, stall prevention, and other improvements.

The Piper M350 is a six-seat, low-wing, single-engine airplane with retractable tricycle landing gear. It has cabin-class accommodation as well as all the safety measures.

The aircraft’s hypoxia safety system is one of the most often mentioned characteristics. Piper M350 offers several appealing features, including a comfortable, aesthetically pleasing, and ergonomic cabin. The M350 has the best interior, including luxury leather, carpet, and wood/metal detailing.

With one of the most extensive upgrade choices available, the Piper M350 is one of the finest alternatives in its class of six-seater piston aircraft in terms of performance, aesthetics, safety features, comfort, and upgradability. 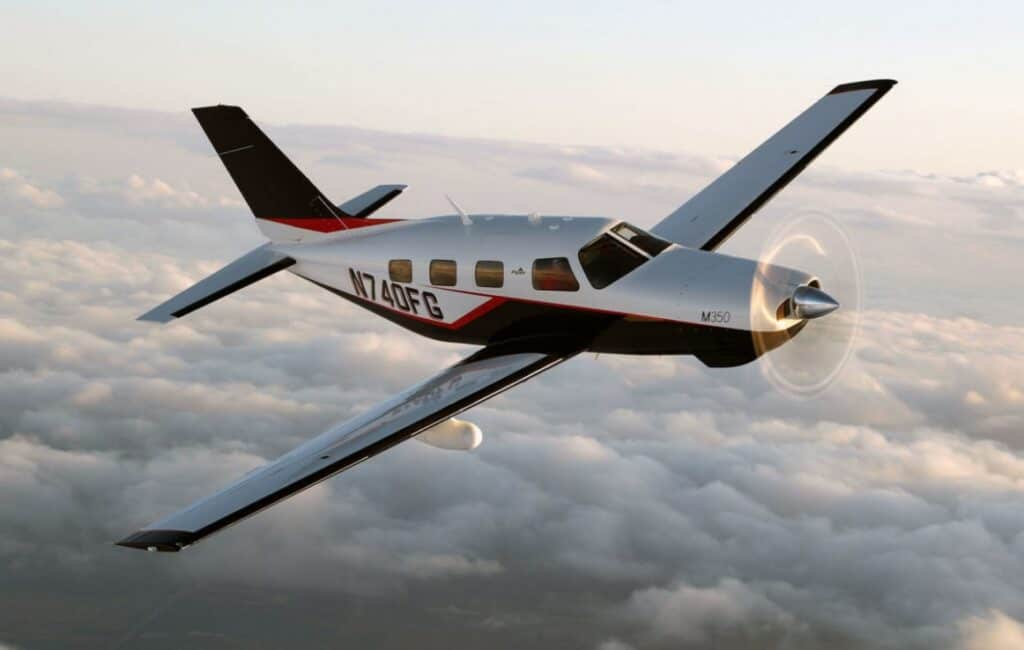 The Piper M350 is a single-engine turbocharged piston aircraft with retractable tricycle landing gear that seats six people in a low, pressurized configuration. The PA-46 Malibu Mirage serves as the basis for this design. In the opinion of Piper, it’s the only aircraft of its kind to have a pressurized cabin. With the M350’s bleed air, you may fly at 25,000 feet and still reach cabin altitudes of 8,000 feet. This greatly improves comfort.

The cabin’s interior is equally as significant as the cabin’s altitude in terms of comfort. In addition, the Piper M350 has a better cabin design. A spacious cabin, power outlets, lighting controls, beverage holders, a worktable, and seat controls for each passenger contribute to the cabin’s high level of comfort. Passengers will arrive calm, refreshed, and ready for anything thanks to six luxury leather seats and a large in-cabin baggage compartment, among other amenities.

Yet perhaps the most significant upgrade making the M350 different from the previous model Malibu Mirage is its advanced avionics, which Piper likes to talk about. The Piper M350 comes with a Garmin G1000 Nxi avionics suite that is used in much current general aviation aircraft. G1000 Nxi system is an upgraded version of the legacy G1000 glass flight deck platform, increasing its capabilities.

Three screens were installed in the cabin increasing the pilot comfort and making constant information flow possible. There is more processing power in the M350 avionics, as well as higher-resolution displays and an enhanced operational feature such as SurfaceWatch runway identification and wireless cockpit connectivity via Connext (Flight Stream 510).

The Garmin GFC 700 autopilot, which is part of the main avionics package, provides an enhanced approach and landing assistance to pilots. The aircraft’s safety systems, on the other hand, are probably the most often mentioned features including a pulse oximeter.

In the event of hypoxia-induced loss of control, the autopilot will enforce safe flying parameters by policing the aircraft envelope. It will also prevent the aircraft from stalling if it is traveling too slowly, seizing control, and lowering the nose (USP System), which should motivate the pilot to add more power. 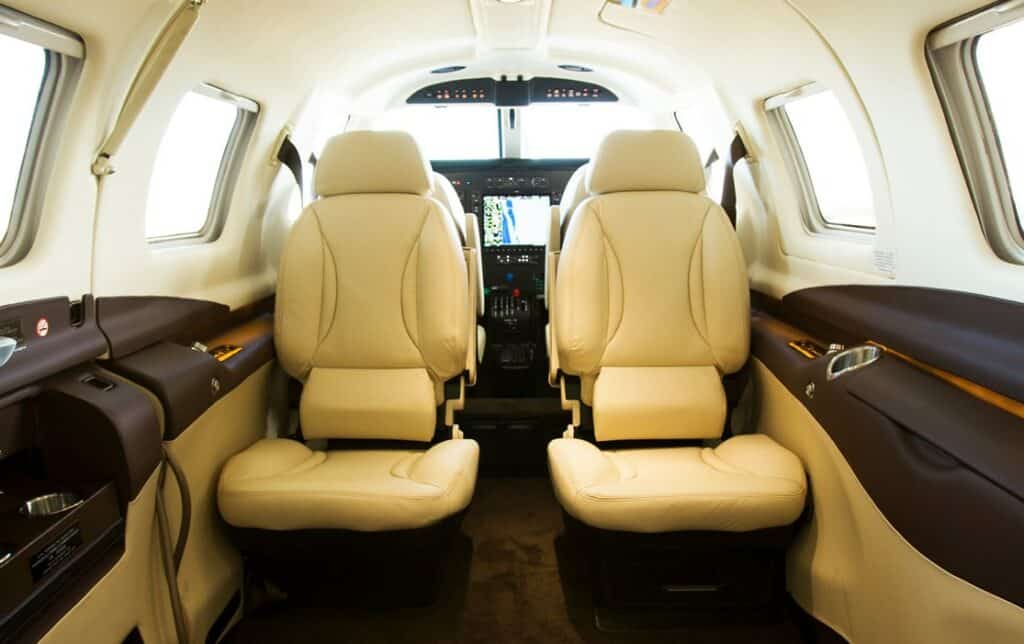 The Piper M350 is powered by a Lycoming TIO-540-AE2A turbocharged six-cylinder piston engine that produces 350 horsepower. Piper uses Hartzell 3-Blade Constant Speed Composite versions with diameters of 80 inches. The M350 has a maximum cruising speed of 213 ktas and a range of 1,343 nm with this engine combination. This means it can travel from Chicago to Salt Lake City or Phoenix, or from London to Naples, for example.

M350 employs the GFC 700 autopilot to aid in the approach and landing. The GFC 700 autopilot effortlessly transitions from en route flying to the terminal area using WAAS GPS-based guidance from the NXi system. It has a 3-degree glide path that can be autopilot-coupled down to pilot-selectable minimums for most runways. When the weather is clear, the NXi series improves situational awareness by including Visual Approach capabilities.

When it comes to performance, the Piper 350 is a piston single that delivers just what you’d expect. It’s well-balanced and easy to fly. All axes have modest control forces, but the roll axis is particularly unexpected given the aircraft’s large wingspan. Aircraft have a nice yaw damper to combat the tendency to yaw when flying through turbulent air. This keeps the aircraft’s excellent handling qualities intact. As previously said, the Piper M350 is one of the most straightforward aircraft in its class to modify, owing to Piper’s clear instructions. The awareness package, the weather package, and the premium package are the three prime upgrade package choices offered by Piper. Additionally, each piece of equipment may be purchased separately. Piper also provides a variety of interior color choices. The Piper M350’s standard equipped list price is $1,212,925. The pricing of avionics equipment and premier package choices, as well as interior upgrade prices, may be found on the Piper website. Based on the combination of extras added, used M350 costs are approximately or slightly $1 Million.

Piper is just as open in terms of operational costs as they are in terms of prices. According to 0.54 man-hours each flight, the M350 maintenance labor cost is $46.98 per flight hour. Engine restoration costs are calculated at $43.10 per flight hour based on standard overhaul and hot section inspection. The price of $28.55 per flying hour includes airframe, avionics, and minor engine consumable parts that require planned or unscheduled maintenance.

The Piper M350 Maintenance Manual can be used to determine the time and restrictions for maintenance. Every owner should keep in close touch with an authorized Piper Service Center or Piper’s Customer Services Department to acquire the most up-to-date information about their airplane and to take advantage of Piper’s support services, according to the Pilot’s Operating Handbook. The Lycoming engine has a TBO of 2,000 hours between overhauls. Visit https://www.piper.com/technical-publications/ for the relevant technical documents.

One of the most significant issues with single-engine piston aircraft is the relatively higher frequency with which engines fail. Continental engines were unreliable in the Piper Malibu series, but the Piper M350 is powered by Lycoming engines, which are more reliable.

Even though Lycoming engines solved a significant problem, they also brought with them a slew of difficulties, including expensive maintenance costs that owners are displeased with. 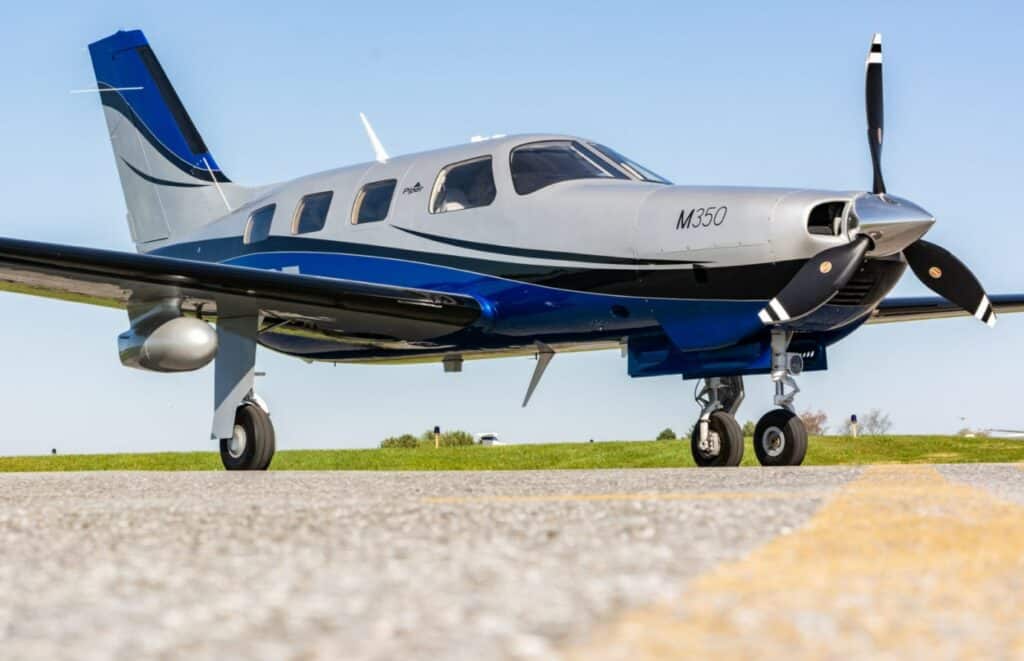 In the words of Piper, the company is devoted to providing its clients with the service and assistance they require to maintain and fly their aircraft safely. The Piper website provides access to an interactive map that shows the locations of the company’s service centers, as well as locations where owners may purchase replacement components. On the Piper website, you may also find part catalogs.

Even though the M350 is a newer model, looking into PA-46 Insurance choices will help you get a better sense of what insurance options are available for the M350. The aviation insurance industry is a highly specialized one, with premiums varying according to factors such as aircraft make and model, hull value, use, and pilot history and qualifications. Aircraft insurance rates also take the loss history of individual aircraft models as well as the industry’s overall loss history into account.

The resale value of the M350 is significantly impacted by the aircraft’s options and packages, as well as the number of hours flown and the aircraft’s condition. As previously stated, aircraft with a range of options and good maintenance are currently selling for around $1 million. Those, on the other hand, appear to be brand new, almost as if they were brand new airplanes.

The advantages of flying in a pressurized aircraft are well-known, but many owners are wary of the greater maintenance expenses associated with these aircraft. Owners of the M350 single-engine piston aircraft rave about its comfort. 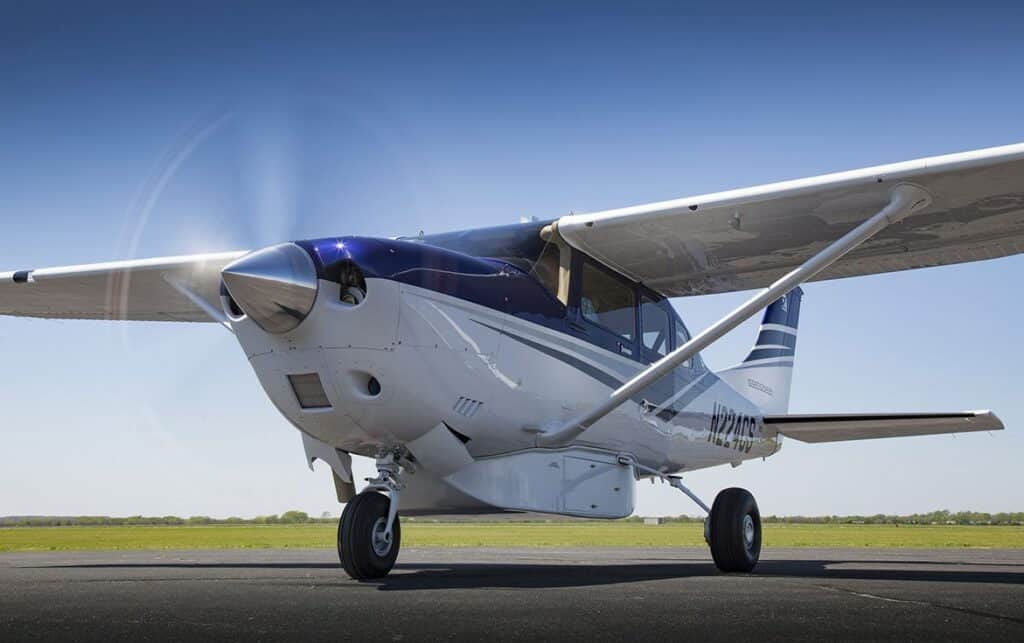 Interestingly, Piper Aircraft compares the M350 with three other aircraft in their brochure. Cessna C206T, Beechcraft Bonanza G36, and Cirrus SR22T G5 GTS are the aircraft under question. When it comes to cabin space and maximum range, the M350 is the greatest choice. But when it comes to usable load comparison, the Cessna C206T is the best choice in this comparison.

The Mooney M22, which was an attempt at a pressurized single aircraft at the time, was quite like the PA-46 Malibu in design. Even though the Cessna 210 N is a four-seat aircraft, there are occasions when it is compared to other Piper M350 aircraft.

Piper M350 Clubs You Can Join

To meet other M350 owners and learn from them, join a group such as the “Piper Flyer Association” or the “Piper Owner Society”. Additionally, you can adhere to the Piper for owners’ official system.

Question: How fast can a Piper M350 fly?

Question: Is the Piper M350 pressurized?

Question: How many seats does the Piper M350 have?

Question: What does a Piper M350 cost?

Answer: The Piper M350’s standard equipped list price is $1,212,925. Upgrade packages are offered as an option.

Question: How fast can a Piper M350 fly?

Question: Is the Piper M350 pressurized?

Question: How many seats does the Piper M350 have?

Question: What does a Piper M350 cost?

Answer: The Piper M350’s standard equipped list price is $1,212,925. Upgrade packages are offered as an option.