Since their debut in 1956, the Cessna 172 Skyhawk and its bigger brother, the 182 Skylane, have constantly competed. Both aircraft have an all-metal construction and share the same high-wing, four-seat, piston aircraft and have many features in common.

So what are the differences? Why do some choose the C182 over the C172 and vice versa? Which should you buy? To answer these questions, we have to understand the characteristics of each aircraft, so let’s start the comparison.

The C172 and C182 owe their success to the simple high-wing, fixed-gear tricycle configuration and high-quality build.

Over the last 65 years, Cessna has not changed the winning recipe, only making minor changes to keep the aircraft updated. Cessna updated the C172 and C182 multiple times, but it only made significant changes in a few models, one of the biggest being the switch from Continental to Lycoming engines.

Both have gained popularity being aircraft for first-time owners because they offer comfort, performance, reliability, and value. The C182 also has a reputation for being a natural step-up for pilots from smaller piston aircraft. 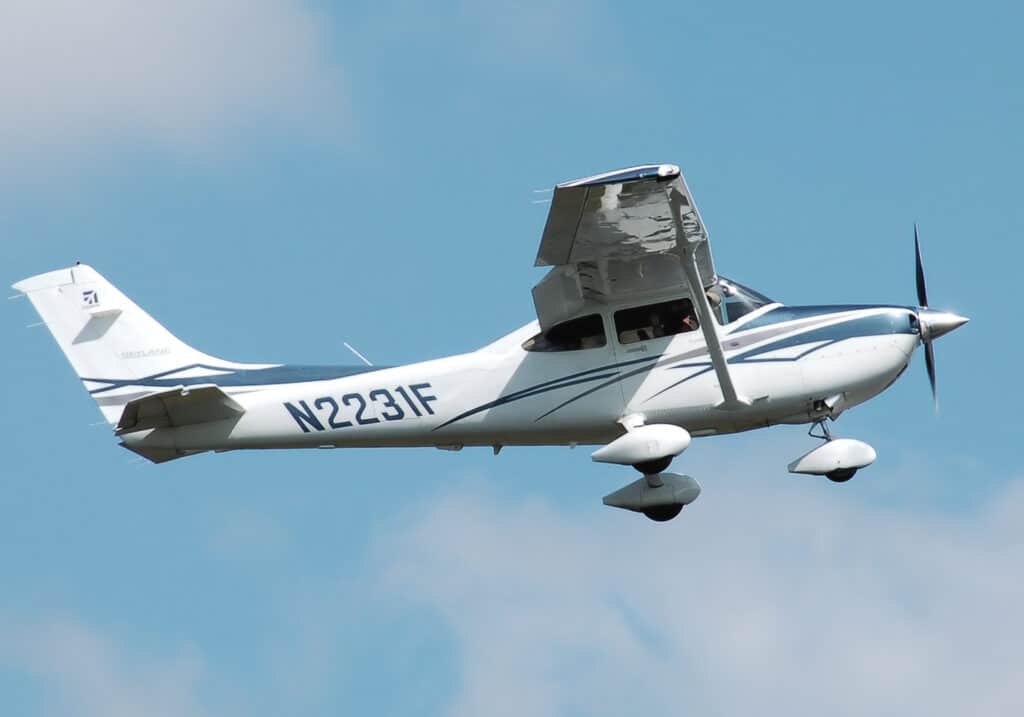 They might be made by the same company and look nearly identical, but there are some stark differences between the models:

The table below outlines the specifications of the latest models of the C182 Skylane: 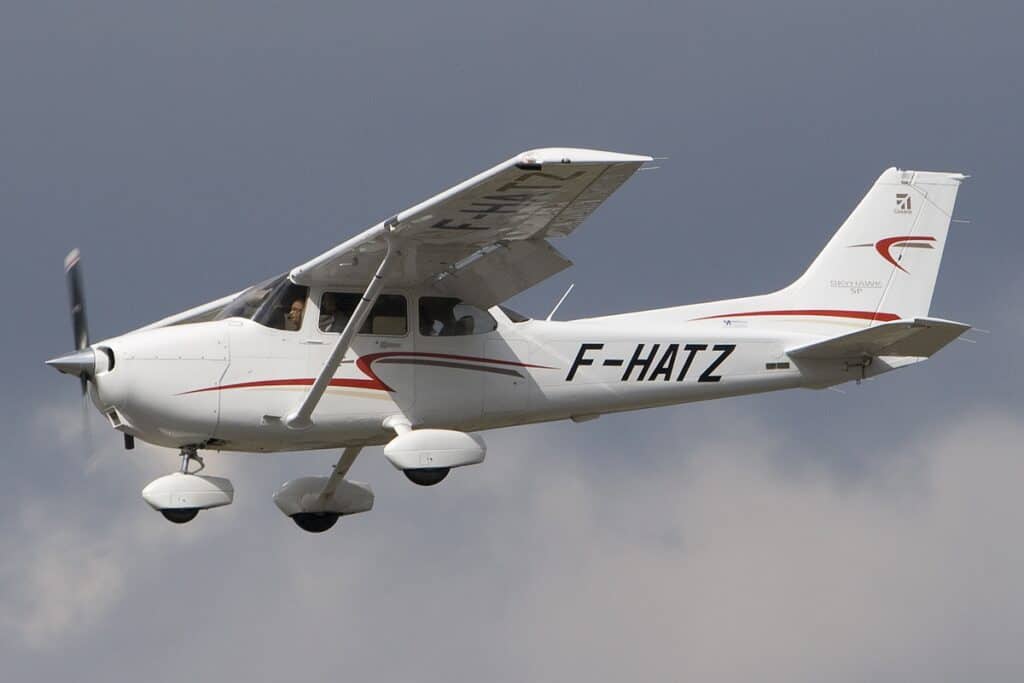 In this section, we will categorize the different areas of each aircraft and compare the two fairly.

A standard factory fresh C182S will set you back $530,000, but the price includes the top-of-the-line avionics suite and similar features.

Because both aircraft are so similar, some might find it difficult to justify spending up to $92,000 more on what is considered to be an upgraded C172.

If the Cessna 172 and 182 are placed side by side, from afar, you can be forgiven for thinking they are the same aircraft. However, upon closer inspection, the differences emerge, the main exterior visual difference being the size.

The interior of the C172 and C182 dimensions differ, but not as much as you would think. The C172’s cabin is actually eight inches longer and only one and two inches shorter in height and width, respectively. Baggage space is also close, with the C172s baggage being only two cu.in smaller than the C182.

While the exterior dimensions of the C182 make it seem larger than the C172, the interior space as a whole is not too different. Therefore, when the price is considered, the C172 wins out because the difference in cost is too significant for such a slight increase in space. 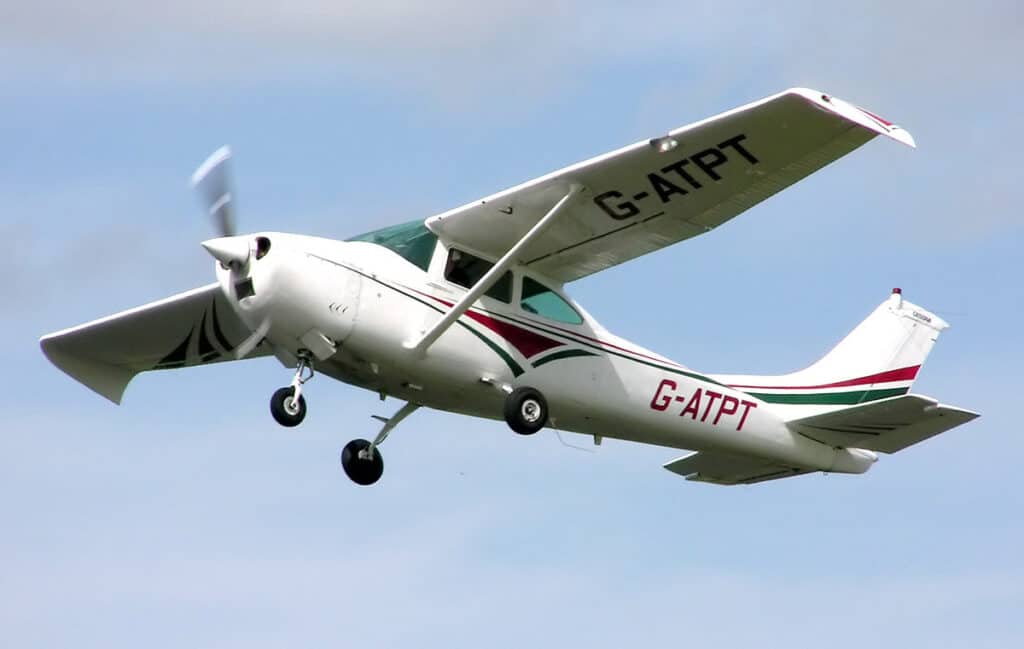 The C182 and C172 have been around since 1956 and have gone through many different engine variants. The main change happened when Cessna decided to switch engine manufacturers. Initially, both aircraft were powered by Continental engines, and later by Lycoming engines when Cessna switched.

Similarly, the C182 was powered by the Continental O-470 family of engines for 24 years and changed when Cessna and Continental couldn’t reach an agreement.

For the C172, if care and attention are given during inspections, the Continental O-300 has no issues. If not, stuck valves and corrosion of the magnesium oil pans can occur. The TBO is 1800 hours, and an overhaul costs around $25,000.

Both the Lycoming O-320 series (excluding the O-320-H2AD) and O-360 series (especially the O-360-L2A) used on the 172s are considered bulletproof. Both engines are known to go past their TBO and run without any issues.

The Continental O-470 series is revered for being robust and has a TBO of between 1700–2200. But since Rolls Royce halted production in 1986, most engines are older, and there are reports of cases and cylinders cracking.

Like most Lycoming engines, the O-540 series performs well, doesn’t have endemic problems, and has a TBO of 1800. According to overhaulbids.com, a brand new engine from Lycoming can cost as high as $70,000, and you can buy a factory overhauled engine for a minimum of $33,500.

Both Continental and Lycoming engines (except the Lycoming O-320-H2AD) are exceptionally reliable and cost significantly less to overhaul than the engines on the C182.

Though they seem the same, the performance of the C172 and C182 is quite different. Bigger might seem better, but is it? The bigger frame, engine, and other components add weight to the C182, which acts against performance.

In addition, the maximum takeoff weight of a C182 is 550 lbs more than that of a C172 and can prevent it from operating on certain ramps and runways. However, the C182 has a useful load of 222 lbs more than the C172.

The C172 has a maximum cruise speed of 126 knots, compared to the 145 of a C182. It might not seem like much, but the faster cruise speeds affect maintenance because the C172 will be flying for more hours for the exact distances that the C182 will be, resulting in higher costs in maintenance and parts.

Where fuel economy is concerned, the C172 is a clear choice. At 75% power in standard conditions, the C172 burns 8.6 gallons per hour, while the C182 burns 13 gph. The range is one of the essential factors in selecting an aircraft, and if your trips are going to be more than 640 nm, then the C182 will have to be your choice.

And if they aren’t, and you can live with getting to your destination a few knots slower, the savings in fuel could be substantial. In this scenario, the C172 would be the aircraft to choose.

When it comes to performance, the C182 has bigger numbers than the C172. In areas such as horsepower, fuel capacity, range, speed, useful load, and others, it appears that the C182 might be the better performing aircraft.

But there is a lot of room for choice, and it all boils down to how an owner would use it. However, a C182 can do what a C172 can, but a latter can’t do what the former can. 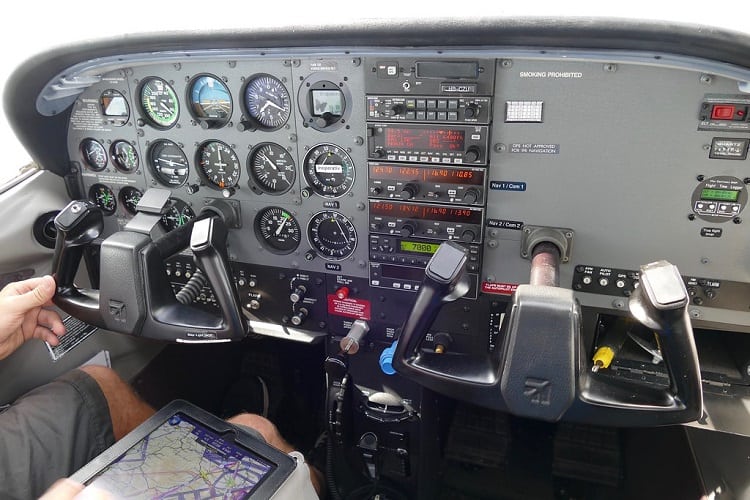 The Cessna 172 was designed and marketed to be a training aircraft, and since the C182 shares the same design, it handles similarly.

The high wing design helps make them some of the more stable four-seater aircraft currently on the market. In addition, pilots of the C172 and C182 say that the controls are responsive and control input is met with predictable behavior.

If mistakes are made when flying, the C182 and C172 are very forgiving, offering enough time to correct errors. Even for stalls, recovery is straightforward. Finally, the tricycle configuration makes taxiing and landings comfortable for the pilot and passengers.

The aircraft’s handling characteristics cannot be distinguished from one another because of their design, so if you’re choosing one of the two based on flight characteristics, it will depend on personal preference.

If you want to explore other aircraft companies compared to Cessna, check out our complete guide about Cessna vs Piper!

Question: What does TBO mean?

Answer: TBO stands for Time Between Overhaul and is the recommended duration before an overhaul.

Comparing two aircraft nearly identical to each is challenging because they are so similar to one another. However, the Cessna 182 Skylane seems to outperform the Cessna 172 Skyhawk in nearly every aspect, and that is to be expected because it’s bigger and more powerful.

However, cost savings are in the C172’s favor. The aircraft is cheaper, and engines are more reliable and more affordable to repair. Overall, you save more money if you would use them both for the same trips.

However, the question that a buyer should ask is, how will I use the aircraft? If you need an aircraft that goes further, higher, and is faster, the C182 is the right choice. But, C172 makes up for the deficit in performance by costing less to buy and operate. It all boils down to personal preference.