The Tecnam P2012 is beautiful, it is a twin-piston-turbocharged high-wing aircraft developed specifically for commuter airlines in mind. It was designed in 2012, as indicated by the code, and has the Tecnam characteristic “P” naming, which derives from Pascal, the surnames of the company’s founders. The P2012 was one of the final aircraft designed by Italian general aviation legend Luigi Pascal. However, despite its earlier design, it received EASA certification in 2019.

For long years, Cape Air, a commuter airline operating in the Caribbean and New England region, used Cessna 402 aircraft. They wanted to replace its aging fleet while keeping the firm expanding. When other aviation giants refused to give them what they desired, they became the first client of Tecnam P2012. They intend to have 100 aircraft over the next several years.

Naturally, this arrangement resulted in the delivery of an aircraft specifically built for airlines like Cape Air. Which, aircraft can take-off and landing from short and even partially prepared runways and requires far less pilot effort than its older counterparts.  With electronic engine management and state-of-the-art Garmin 1000 Nxi avionics, the aircraft may be operated by a single pilot with minimum effort.

Along with the Airline configuration (9+2), the P2012 is available in four more variants. It may be configured as a Combi, Medevac, or Cargo aircraft. The aircraft is simple to operate in all configurations due to its broad fuselage, which is distinctive in its class, and doors that provide easy access to the cabin and luggage compartment in the rear.

While it is an excellent choice for commercial aircraft, it may be a decent substitute for private owners who prefer aircraft such as the Cessna Caravan. After decades, I believe the Tecnam P2012 will breathe fresh life into the stagnant twin-engine 11-seat aircraft market. Another of the advantages of aircraft is that they are approved for single-pilot VFR/IFR and all-weather operations. 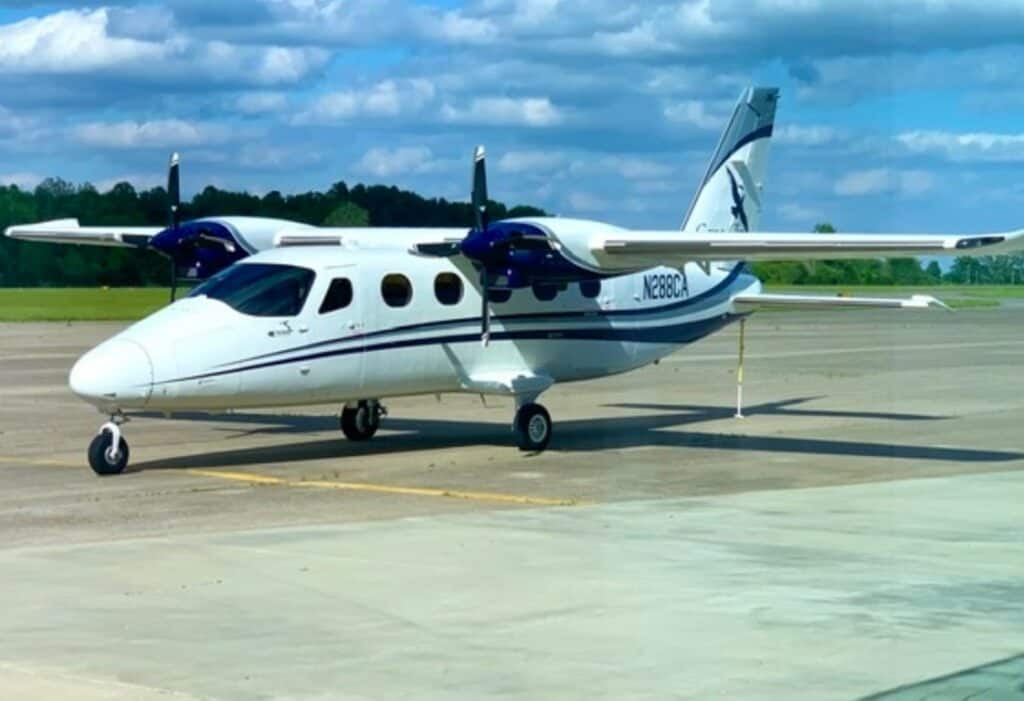 The Tecnam P2012 Traveller is an 11-passenger twin-engine high-wing aircraft designed to operate in difficult circumstances while requiring less maintenance and therefore lowering operator expenses. This goal inspired Tecnam to develop a metal framework and fuselage that are more maintainable than composite structures. Two Lycoming 6-cylinder turbo piston engines power the plane. Tecnam claims that this is the world’s first piston aircraft with electronic engine power management, which, when combined with the Garmin autopilot, removes the need for manual air-fuel mixture adjustment.

The engine control isn’t only a feature that makes operations easier for the pilot or pilots. Because this aircraft can be handled by a single pilot, the entire cockpit has been built to make things easier. The avionics suite of the aircraft is based on the Garmin 1000 Nxi, which is widely used in current aircraft and well-liked by pilots.

The avionics suite has two 10-inch screens and one 12-inch central display; the first two display primary information, while the central display acts as a backup along with an internal battery in the case of a power outage. The aircraft can stay connected via Satcom and flight-stream data exchange.

The digital Garmin GFC 700 autopilot is in the cockpit’s center and operates in combination with the previously stated primary avionics suite and electronic engine controller. Allows for a smooth flight at a fair cost and in a pleasant way for the passengers.

However, the passengers’ comfort is also considered in the cabin. The cabin is accessed by three doors: two for the flight crew and one on the backside. For passage access and cargo/baggage loading, the hatches are divided into three separate hatches. Each of the nine single seats has its own passenger compartment, complete with a dedicated window, USB port, armrest, and fresh air/hot air outlets. 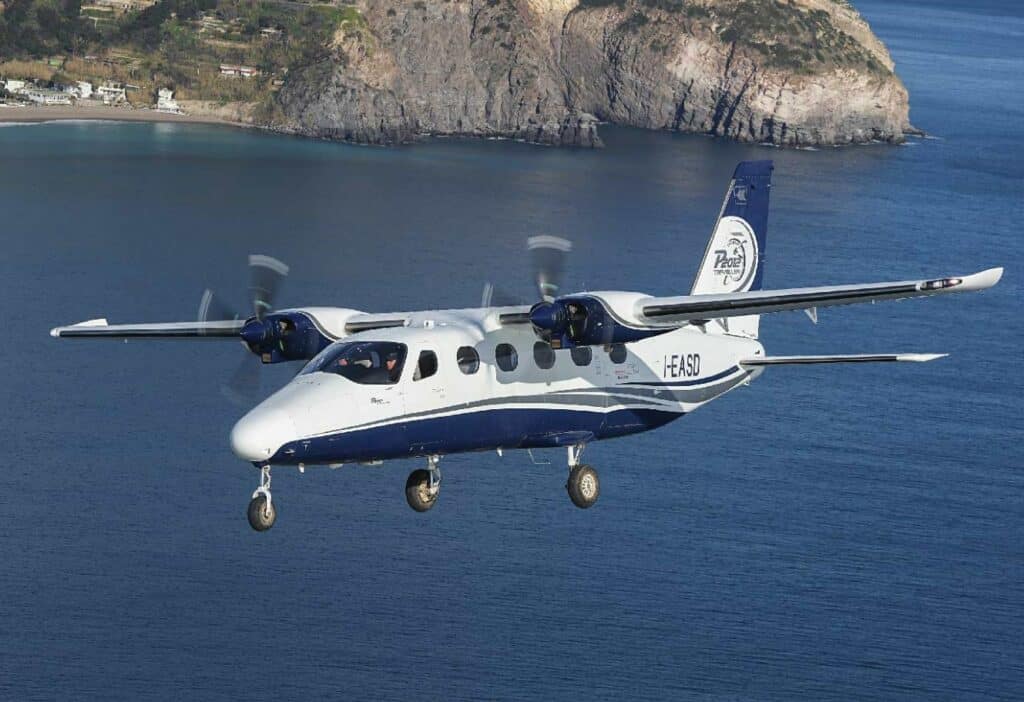 The aircraft is propelled by two Lycoming TEO-540-C1A engines. The Tecnam P2012 features a positive single-engine climb gradient up to 10,000 ft, demonstrating the company’s commitment to product safety. These engines include direct drive, a six-cylinder configuration, horizontally opposed pistons, turbocharging, and air cooling. According to Tecnam, the reason they chose a direct-drive engine is to save maintenance expenses. Additionally, the P2012 engines include an automotive-style starter, a 28-volt alternator, and a propeller governor pad.

As previously stated, engines are controlled by an EEC that continually monitors and adjusts timing, fuel injection time, and fuel mixture dependent on operating circumstances. Due to the presence of EEC, the pilot can concentrate on other flight parameters while ensuring that the engine is operating at peak efficiency. Additionally, turbocharged piston engines include anti-knock, Overspeed, and Overboost protection.

As Tecnam claims P2012 can utilize runways as short as 1791 feet (546 m) at its maximum weight. When high wings and engines are considered, the P2012 is ideal for connecting isolated locations. With these performance metrics, we can claim that pilots will like the aircraft’s takeoff and landing performance while landing on difficult runways. This is unsurprising given that P2012 was planned with this type of runway in mind.

Tecnam matched the high efficiency of aircraft with this runway performance, allowing it to fly significant distances on less fuel. The aircraft’s maximum range is 950 nautical miles (1760 kilometers), and its maximum cruising speed is 194 knots (359 kilometers per hour).

Overall, the Tecnam P2012 is a little slower to react than some of its competitors, but it is steady, pleasant, and safe, and provides everything a pilot needs to guarantee a safe and pleasant flight. It does have the significant benefit of operating on short and partially constructed runways, maintaining a steady and consistent control, and maximizing fuel efficiency while flying as far as it can go. Of course, this is exactly what one would expect from a commuter airplane. The Tecnam P2012 is currently available in four variants. Tecnam offers TKS Ice protection for the Airliner model, which is approved for FIKI (Flight Into Known Icing Conditions), weather radar, and Storm Scope. This arrangement is used for passenger transport.

The Combi arrangement transports both goods and passengers. This is a sort of need that arises in distant regions where some items must be transported via aircraft capable of landing on short runways. Tecnam does this by substituting seats for cargo pods, allowing for a changeable mix of passengers and goods in the cabin. There are 5+2 seats in this arrangement.

In another version, Medevac Tecnam is directed towards medical authorities worldwide. The P2012 Traveller can be readily converted to an Air Ambulance duty. Again, its short runway capability makes it an excellent choice for difficult-to-reach places.

Additionally, the Cargo configuration enables the P2012 to transport more than 1 metric ton of cargo on up to four pallets within a 5 cubic meter volume. A unique cargo door is fitted in this arrangement.

Additionally, there is a specific missions configuration for armies known as P2012 SMP.

At the moment, there are no available secondhand airplanes. As previously said, the primary target market is commuter airlines; but, in the future, we may see private owners of these aircraft, resulting in pre-owned sales. A new P2012 is currently priced at $2,6 million. Naturally, this price will increase with different setups and upgrades.

The maintenance intervals of the P2012 can be found in the Aircraft Maintenance Manual (AMM) provided by the Tecnam.  To reach out to the available service points you can check the Tecnam website. Also, you can reach to Type Certificate of the aircraft from the link here.

For the engines Lycoming publishes the time limits/inspections in the Engine Maintenance Manual, this document is publicly available. Engines have one initial 10-hour inspection and after every 25, 50, 100, 250, 400, 1000 hours inspections mentioned in the relevant document. 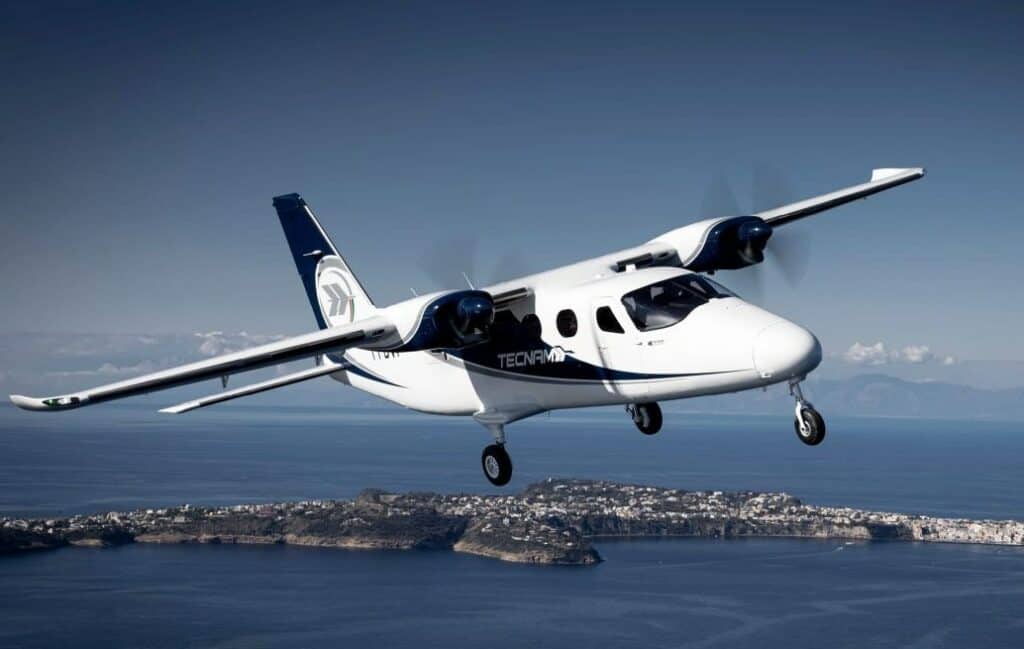 So yet, no frequent difficulties have been recorded because it is such a young aircraft. We’ll be able to observe if there are any complaints while these planes are recording hours. It should be highlighted that because the majority of the operators will be airlines, finding out information will take longer. One source of worry is that Tecnam is an Italian firm, and its service centers are simpler to locate in Europe than in the United States. Tecnam, on the other hand, is well aware of the problem, and I believe they have already devised a resolution.

For those who want to keep the aircraft as private investment and will require spare parts in the future, the Tecnam website offers “Spare Parts-Parts Catalogs.” Optional improvements may be offered in addition to replacement parts. This panel, on the other hand, may only be accessed by logging in with your username and password. Tecnam headquarters and authorized repair and service facilities for your P2012 may be found on the company’s official website. Visit https://www.tecnam.com/locator/ to find the nearest one.

If the aircraft is owned by individuals rather than by airlines, and if you choose to insure it, you will have two broad alternatives, just as there are for nearly all general aviation aircraft in general. Both liability insurance and hull insurance are essential. While one insurer covers damage caused by the aircraft, the other insurer covers harm that the aircraft can sustain. 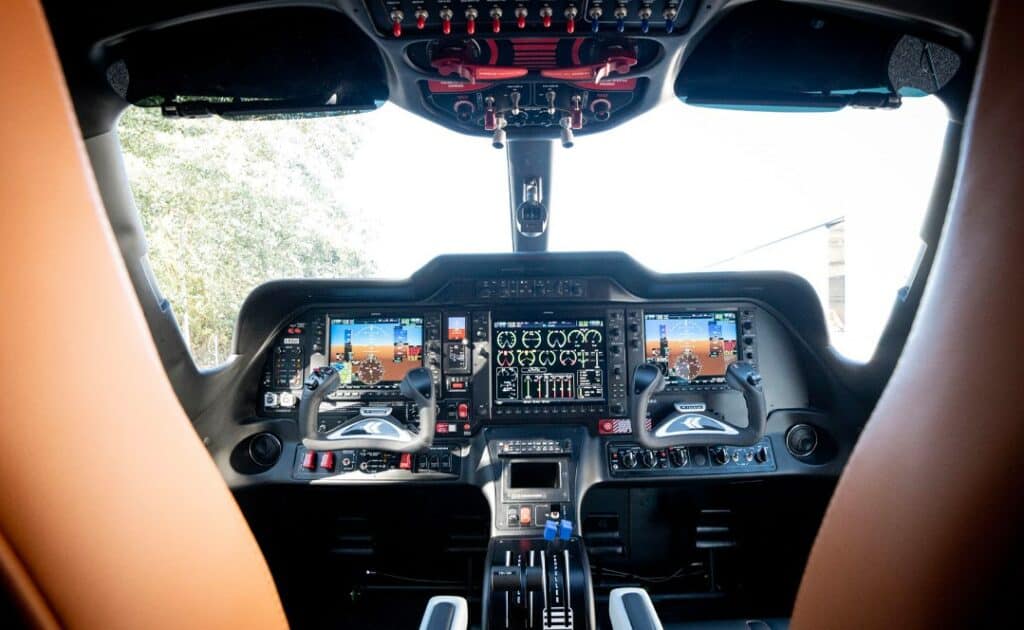 It is difficult to estimate the aircraft’s resale worth currently because the aircraft is still in the hands of some firms. However, just like with any other aircraft, the overall number of flying hours, engine hours, configuration, and any improvements installed on the aircraft will have an impact on its resale value.

As more individuals try the aircraft and provide remarks in the demos, it becomes clear that Tecnam did an excellent job. Many people are unsure what the function of this aircraft is at first look, but as they learn more about it, they realize that Tecnam tried its best to build a contemporary aircraft for commuters. Other than Cape Air, it is projected to have a larger client base. Tecnam, for example, has agreed to work with German Air Alliance as a new reseller for the Tecnam P2012. This aircraft is anticipated to be used in international commuter fleets and will provide a comfortable trip.

Tecnam P2012 Clubs You can Join

To meet other Tecnam aircraft owners and learn more about the aircraft, join the Tecnam Aircraft USA Owner’s Group or visit the Tecnam Talk forum.

Question: How much does a Tecnam P2012 cost?

Answer: The Tecnam P2012 is available for purchase at $2,6 million.

Question: Is the Tecnam P2012 pressurized?

Answer: P2012 does not have a pressurized cabin due to the lower altitude at which it operates.

Question: What is the maximum cruise speed of a Tecnam P2012?

Question: Where are Tecnam aircrafts built?

Answer: It is made in Italy. Capua, Italy is home to the company’s headquarters.