Cessna 208 Caravan and Daher Kodiak 100 Compared: Which Is Better?

The Cessna 208 Caravan and the Daher Kodiak 100 are very similar aircraft and have long been in competition with and therefore compared to one another. So what are the differences? Why do some operators choose to fly the Cessna Caravan over the Daher Kodiak and vice versa? Which aircraft is right for you? To help you answer these questions, we have conducted a detailed nose-to-tail comparison of each aircraft. So let’s dive in.

Single-engine turboprop aircraft is the perfect middle-ground for operators who want the power of a jet engine and the versatility of a propeller. This is why these aircraft are used in conditions where high payloads need to be delivered in small airports and harsh conditions that are normally not accessible by typical jet aircraft.

Two of the most famous utility single-engine turboprop aircraft are the Cessna 208 Caravan and the Daher Kodiak 100. These two aircraft are used for operations by organizations like NGOs in developing countries and by cargo operators like FedEx for short-haul flights. In fact, FedEx is the largest Cessna Caravan operator, with a fleet of over 250 aircraft. The aircraft are also favorites for float operations and can be found in coastal regions such as the Maldives being used as air taxis and ambulances.

The older and more popular of the two is the Cessna Caravan, which debuted in 1984, a full 24 years before the Daher Kodiak. Cessna has produced close to 3,000 units of the Caravan line which includes other Caravan variants such as the Grand Caravan.

Daher’s Kodiak is relatively unknown when it comes to the utility single-engine turboprop category. This is because the older and more established Caravan is the reason the Kodiak is often overlooked, and why the amount of Kodiaks produced is less than 10% of that of the Caravan. Another reason is that the aircraft has been renamed. The aircraft was initially called the Quest Kodiak, but this changed in 2019 when Daher bought out the Quest Aircraft Company.

What Are the Main Differences Between the Cessna 208 Caravan and the Daher Kodiak 100?

Both of these aircraft mirror each other, and there isn’t anything that one can do that the other can’t. It’s just that each of them edge out the other in certain categories. Some of the main differences between the two are: 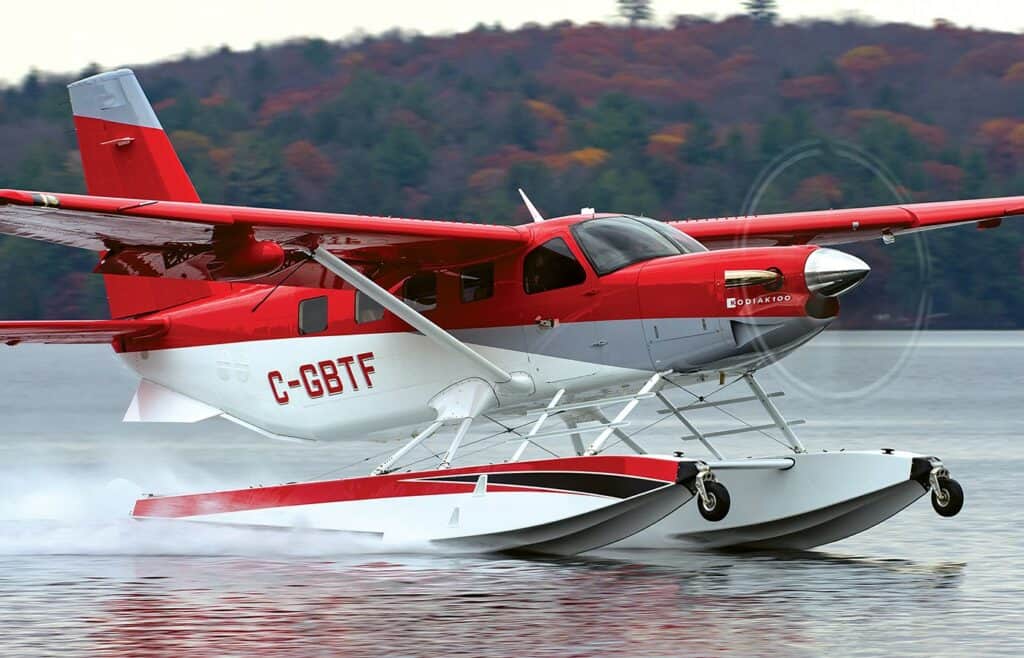 The Cessna Caravan is cheaper than the Daher Kodiak. A 2021 Caravan retails at around $2.45 million, whereas a Kodiak of the same year costs $2.63 million.

The Cessna Caravan is marginally larger than the Daher Kodiak, which allows it to haul more cargo and passengers.

Thanks to its larger size, the Caravan can fly a maximum of 14 passengers if required, whereas the Kodiak can only carry 10 passengers. At a glance, the Daher Kodiak is a more capable aircraft than the Cessna Caravan. It can fly and climb faster, burn less fuel, travel further, and land at shorter airstrips than the Caravan. However, upon further inspection, it can only do these things because it carries less weight than the Caravan. 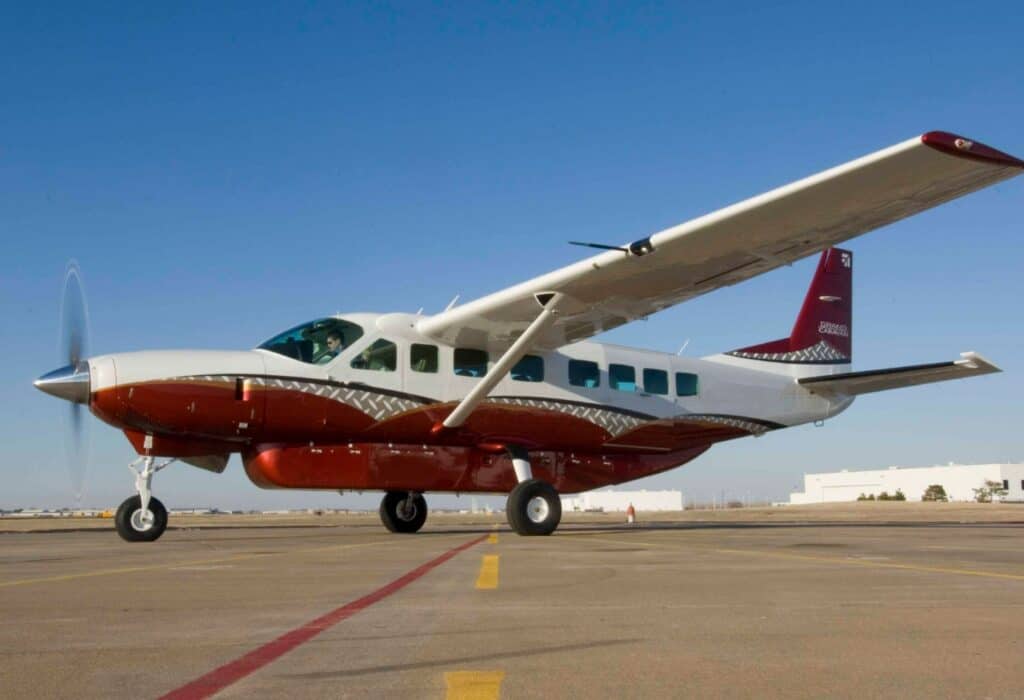 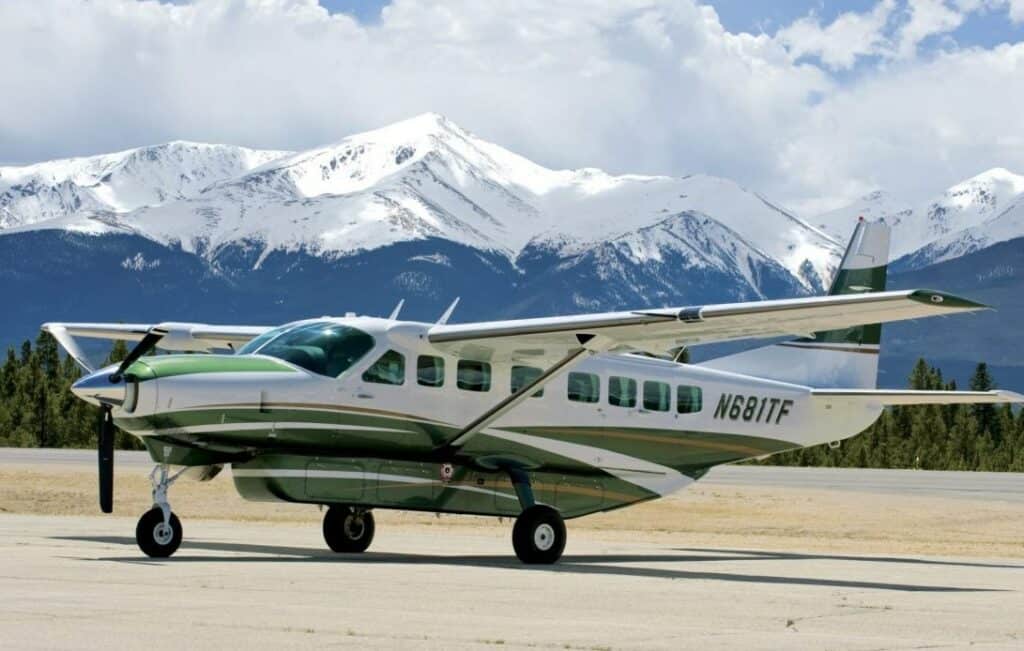 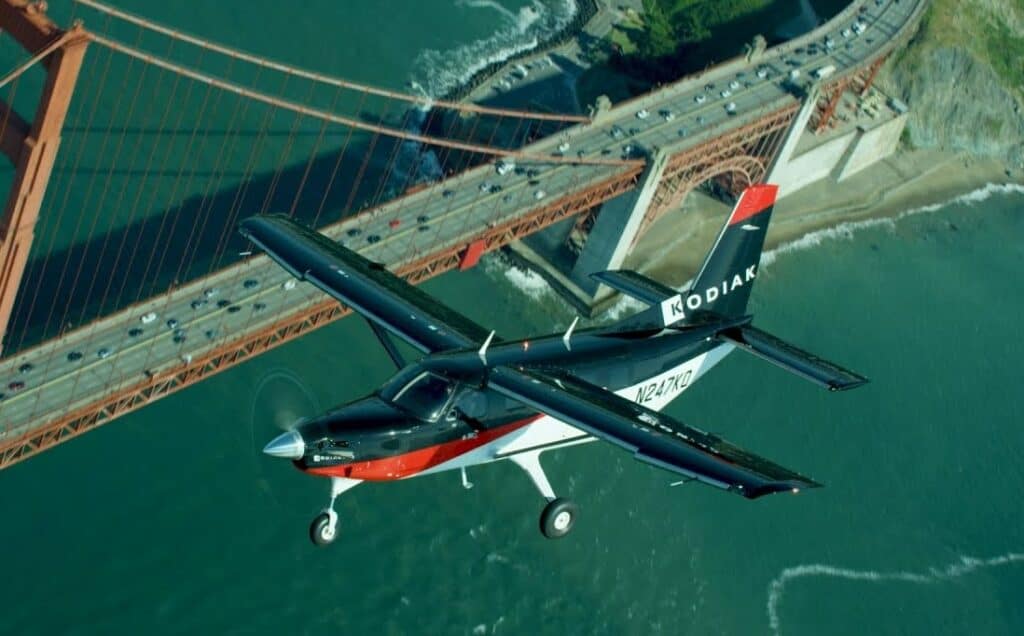 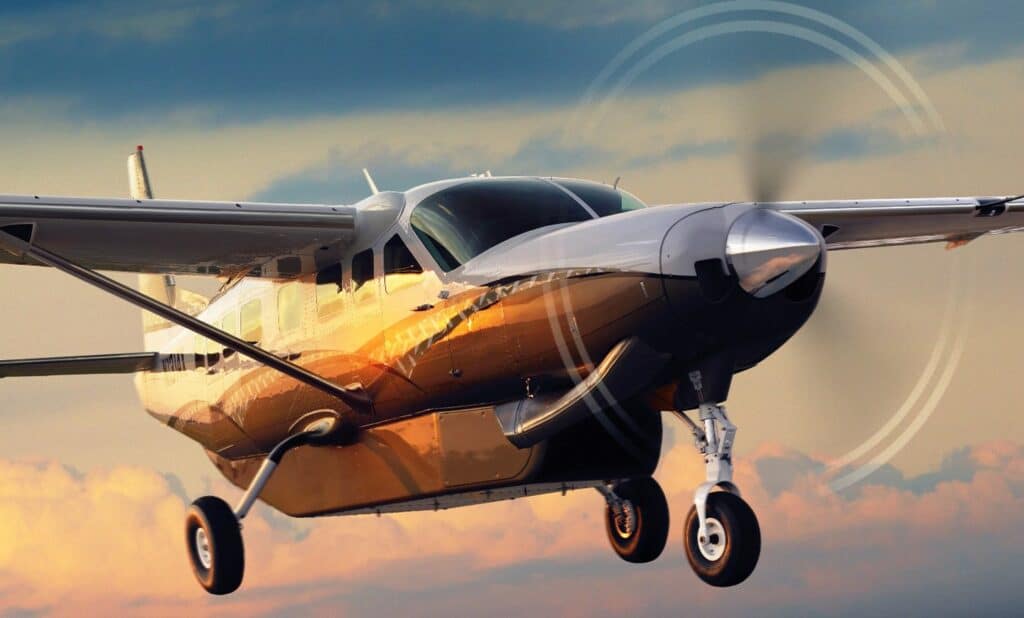 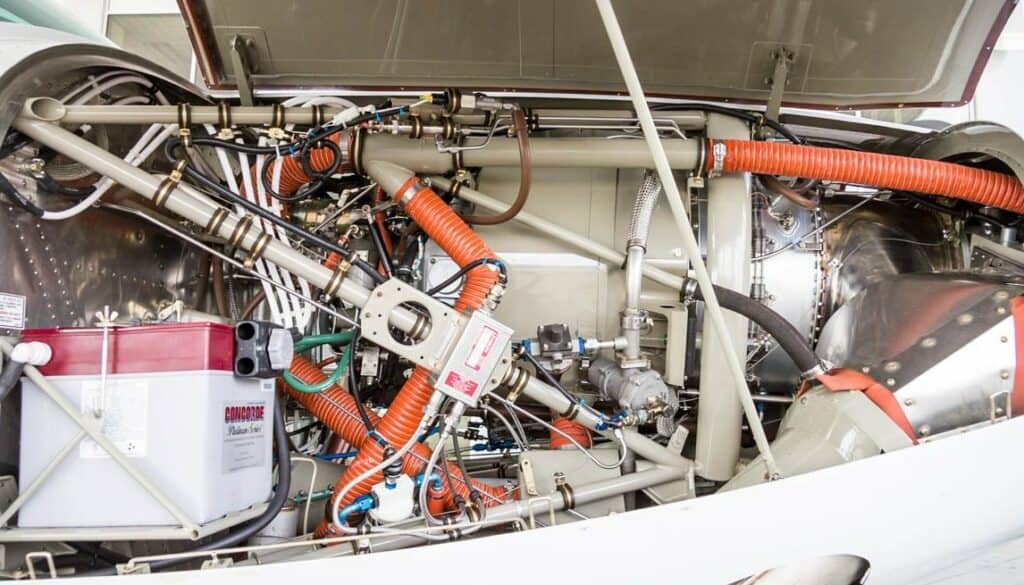 This section breaks down the reasoning for which aircraft is better in areas that matter when making a purchasing decision.
Price
The initial cost of an airplane is one of the most important factors when choosing an aircraft, for both private and commercial operators. In 2021, a brand new base model Cessna 208 Caravan costs $2.45 million and the price only increases as options such as floats are introduced.

The Caravan has a great reputation for being a sturdy and long-lasting aircraft with great resale value. An amphibious Caravan that’s close to 15 years old and with 6,000 hours total time is being sold for around $1.4 million which tends to be the average price. A well-kept Caravan can be anywhere from $1.2 million to $2.2 million, depending on the model year.

Daher charges customers $2.63 million for a brand new base model Kodiak 100 Series III, just like the Caravan, the base model includes the top-of-the-line avionics, however, other options like floats are not inclusive in the price either.

Daher Kodiaks aren’t as popular as Cessna Caravans, and therefore the value of the aircraft depreciates quicker. A well-maintained, amphibious 2015 Kodiak with only 668 hours on the frame is being sold for $1.8 million, whereas a similar Caravan model would have fetched a much higher price. While this is an approximate comparison that is subjected to many factors, the end result is the same: Caravans have a better resale value than Kodiaks. \

The Caravan is a cheaper aircraft that depreciates slower than the competition, which wins this category.

If the Cessna 208 Caravan and the Daher Kodiak 100 are placed side by side, from a distance, the average person might not be able to tell the difference between the two. Both aircraft are high-wing and designed very similarly. However, upon closer inspection, the differences start to appear.

However, the Kodiak beats the Caravan out when it comes to full fuel payload. The Kodiak can carry 510 lb (231 kg) more than the Caravan while carrying a full load of fuel, which is very attractive for operators looking to haul a lot of weight for longer flights.

Even though the Kodiak can carry more weight with a full load of fuel, the Caravan beats it by being the better pick for every other situation. The PT6A-114A in the Caravan produces 675 shp (503 kW) which puts it at a power disadvantage to the Kodiak’s PT6A-34 which produces 750 shp (560 kW). The extra power could allow the lighter Kodiak to be airborne with a heavier load in the same landing strip than a Caravan with a lighter load would.

When it comes to maintenance, the Caravan’s PT6A-114A has a hot section inspection time (HSI) of 1,800 hours, while the time before overhaul is 3,600 hours. The PT6A-34 that powers the Kodiak on the other hand has both a higher HSI and TBO of 2,000 and 4,000 hours, respectively. The longer HSI and TBO of the Kodiak’s engine means that it will have to be maintained less frequently than the engine in the Caravan, resulting in lower operating costs.

For having more power and needing to be maintained less frequently, the Kodiak wins in this category.

Just looking at the spec sheet, the Daher Kodiak has better numbers than the Cessna Caravan. But it doesn’t necessarily leave the Caravan in the dust. That said, the Kodiak does perform well in certain areas.

It has better STOL capabilities than the Caravan and it to go places the Caravan cannot, which is an important factor considering that these aircraft are almost exclusively used to carry payloads to small and remote areas that normal jet aircraft cannot reach.

For example. If both aircraft have to transport 50 people, it would take the Kodiak 5 trips, while the Caravan can do it in 3. In such a situation the minor performance advantages the Kodiak have are nullified.

The Caravan can do what the Kodiak can’t, but vice versa isn’t always true. The Caravan wins out in this category.

Both aircraft follow a very close design philosophy and are almost identical to one another. So it is no surprise that they both handle and fly similarly. Pilots who have flown both aircraft only pick a favorite based on personal preferences vs actual handling differences. The high-wing, dihedral design of the aircraft means they are extremely stable during flight, which is useful because of the conditions they are used in.

Question: What Is a Hot Section Inspection?

Answer: A hot section inspection is conducted at half the time before overhaul of a turboprop engine and involves inspecting major components of the engine to ensure that there isn’t any unwarranted or excessive wear that could cause problems.

Comparing two aircraft nearly identical to each is challenging because they are so similar to one another. The differences in the spec sheets are glaring and seem like they would favor the Kodiak, but in practice, the Cessna 208 Caravan seems to outperform the Daher Kodiak 100 in nearly every aspect when the bigger picture is taken into account.

Even if a prospective buyer was swayed by the spec sheet, the cost savings that the Caravan provides are undeniable and dwarf any performance advantages. While the initial cost of the favors the Caravan, the more expensive Kodiak burns less fuel and will cost less when engine maintenance is taken into account. Therefore, for operations where it’s a toss-up between a Caravan and Kodiak, choosing a Kodiak might yield long-term savings.

The main question when choosing any aircraft is: what will it be used for? In most situations, the cheaper and more utilitarian Caravan wins out. But in an operation that requires a high maximum full fuel payload, for example, the Kodiak will be the best choice. How and why you fly the aircraft will be the ultimate deciding factor.

For covering a wider range of situations and having an overall advantage in weight and occupancy. The Caravan wins this comparison.